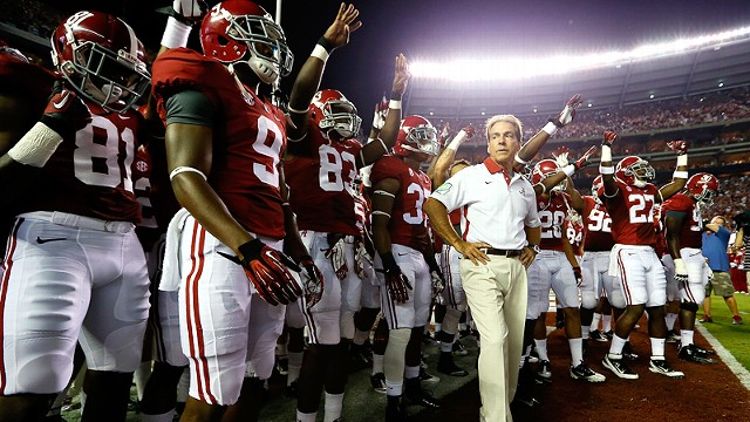 If you watch college football on TV, you find yourself watching commercials for Aflac, Home Depot, and … colleges. Ads for the University of Texas say, “What starts here changes the world.” Ads for Texas Tech say, “From here, it’s possible.” The former is a boast, while the latter is more of a timid suggestion. I can’t think of a better way to explain the difference between Texas and Texas Tech.

Before we dive into the aesthetics of college ads, which are called “institutionals,” we should note that these things are weird for a couple reasons. First, what’s the point? They’re plopped in the middle of a game — as mandated by the conference TV deal — to prove that there’s a university attached to the football program. “It’s coeds, cellos, and sports,” an ad executive told the Wall Street Journal’s Darren Everson. Essentially, the school is reminding us, “We put the ‘student’ in student-athlete,” and it makes that label look like even more of a crock.

The other weird thing is that the football game is often a better ad for a college than the actual ad. Alabama’s CBS telecasts have slick graphics, “honey shots” of the cheerleaders, and Verne Lundquist. Alabama’s TV ad has a bunch of robotic, smiling students and looks like it was cut together in the basement of the communications building. Which one makes you want to go to Tuscaloosa?

I’ve gone through the latest BCS standings and reviewed each school’s attempt to market itself. I’ve mixed past ads with present ads, because college commercials don’t seem to have aesthetic “periods.” I’ve also skipped schools like Kansas State, which have boring ads. (You could argue this is a perfect reflection of the Kansas State football team, which is seemingly boring but beats Oklahoma on the road.) Here are the best commercials from the Top 25 (click the team name to view the ad):

A teacher looks out at his students … and a crimson death ray shoots out of his body! Seriously — watch the ad. I’d call Bama’s ad creepy, but since it seems to embody Nick Saban’s own superpower, it kind of works. One thing you’ll notice is that nearly every college ad includes “cosmopolitan” shots from around the world. The idea is that you can start in Tuscaloosa but wind up in Tokyo. Here, notice the shots of Asian businessmen … who are also subject to the Saban Ray.

The most highbrow ad in college football. It begins with a shot of Abraham Lincoln and a discussion of the Morrill Act of 1862, which gave birth to land-grant colleges. That an SEC school should pledge fealty to Lincoln is pretty startling. (The ad goes on to say that Abe would be proud he helped build such a university in the South.) Florida may be surfing off the cultural capital of Spielberg’s Lincoln as, until this year, the Gators have surfed off the capital of Alabama and LSU.

Religious. Solemn. Sorta smug. Which is to say, perfect. To meet the cosmopolitan quotient, Notre Dame has included shots from a couple of different continents. (The first of these may be Middle-earth.) Also seen: solar panels! This is a school that wants to hawk its ancient tradition and give a bear hug to the 21st century.

Clean water, healthy food, wind power — all that’s lacking is the Archer Daniels Midland slogan “supermarket to the world.” But give Oregon State points for picking a single, menschy feel and sticking with it. It’s a lot more memorable than trying to cover the waterfront.

I reached back to the Pete Carroll era for this ad for USC’s medical doctors. A woman sits in a waiting room when she looks over and finds — Coach Carroll! She starts fanning herself. You’d think a school that was/is known for its celeb-schmoozing, Playboy Mansion grotto of a football program would tout its doctors’ credentials. But, no, ’SC is a good place for a checkup because Pete Carroll — now, Lane Kiffin — might have his physical the same day. Actual tagline: “See the doctors Coach Carroll sees.”

A perky blonde woman looks at the camera and rattles off stats about ACT scores and low tuition. But she doesn’t tell us which school she goes to. Surprise, it’s Louisville! Perfect for this year’s football team, a surprising 7-0 under Charlie Strong.

Two coeds sit under a tree. They seem like boyfriend-girlfriend. The girl hands the boy one of her earphones so they can listen to something (music? The B.S. Report?) together. It’s a college relationship captured on film! If these were actual West Virginia students, as seems likely, there’s a 100 percent chance they’ve broken up by now.

On the banks of a river
In a city of trees
Where ideas grow wings like dreams set in motion
You feel the blue roads like an ocean
That’s where I’ll be
That’s where you’ll find me
Boise State Uni-ver-si-ty.

Boise also observes the rule that the more obscure your college’s location, the more urgent it is to show us an alum with an exotic profession. In this case, an astronaut. You can go to Boise State and become an astronaut.

For a school so puffed-up about its academic reputation, this ad sounds a lot like a football game, complete with “The Victors” score. But the tagline is what gets you: “The Michigan difference.” This may be the most pompous tagline since …

“What starts here changes the world.” As a Texas alum, I’ve seen these commercials dozens and dozens of times. Lemme tell you, the “changes the world” bit plays great when UT is winning by 21. Less well when UT’s secondary is making Nick Florence look like Andre Ware. The old narrator, UT dropout Walter Cronkite, was replaced by an opera star, Barbara Conrad.

A diverse cast of young’uns talk about the stuff they’ve done. One of the nicest college ads ever. A school you want to root for.

Unranked. Baylor: Forget Texas Tech’s “From here, it’s possible.” We have a new winner in the unintentionally depressing sweepstakes! Watch the kid about 10 seconds in turn to the camera and say, “I found myself at Baylor.” He means he found his passion, his career. But his inflection is off. It sounds like: Yeah, I sorta blew off the SATs and didn’t get my applications in on time. Mom and Dad dropped me off in Waco … and, what, Ken Starr’s the president?! There’s an easy solution. It’ll straddle the line between academics and football. Take another guy who was passed over by big schools and found himself at Baylor. If RG3 says those words, I might even want to go there.