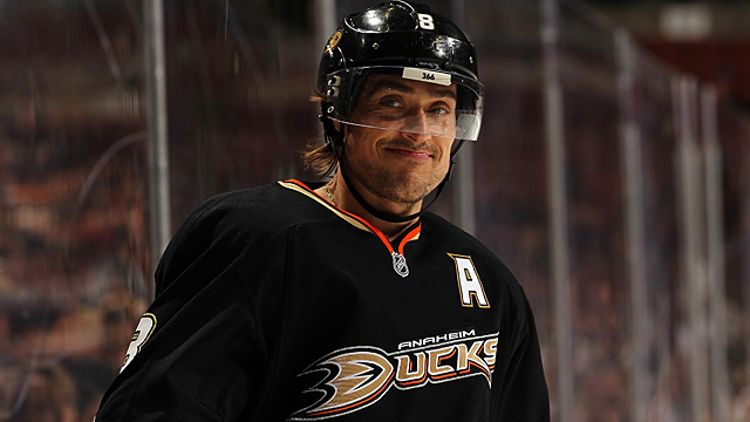 Last month, Teemu Selanne made a pair of important announcements. The first wasn’t a surprise: He is returning to the Anaheim Ducks for another season. But the other was at least somewhat unexpected. This will be his final season.

Yes, after 21 seasons, Teemu Selanne will finally hang up his skates next spring. That’s crushing news for hockey fans, who almost universally love the guy and have spent the last decade in a state of collective denial over his eventual retirement.

But the good news is that he gave us advance notice, which means it’s time to get excited about the Teemu Selanne Farewell Tour. And in a nice twist, realignment and a new scheduling system means Anaheim will visit every NHL city this season, so fans of every team will have a chance to say good-bye.

That got me to thinking about the ways various teams could market the last opportunity to see the retiring legend. Here are some suggested marketing slogans for the various stops on Selanne’s final lap.

Toronto, October 22
Come enjoy our 45-minute pregame tribute to the best Maple Leafs backup goalies of the mid-’80s, and also maybe there will be another team playing or something, we didn’t really check.

Montreal, October 24
Goodbye to our favorite Finnish player of all time, and … oh, hey Saku, didn’t see you there. Well. This got awkward.

Ottawa, October 25
This feels like a good time to finally admit we all think Daniel Alfredsson shot that puck at Scott Niedermayer on purpose.

Philadelphia, October 29
To commemorate your retirement, please accept this gift of a pair of goalie pads. Now please put them on. Now please start for us tonight.

Buffalo, November 2
Teemu, please come out to center ice for the ceremonial faceoff. Yeah, just stand right there, next to John Scott and … hey, where’d you go?

Pittsburgh, November 18
So yeah, we drafted Darrin Shannon six spots ahead of this guy in 1988 in case anyone wants to cry right now.

Detroit, December 17
Come out and enjoy the once-in-a-lifetime opportunity to see a beloved legend who won’t be tarnishing his legacy with one final season as a Red Wing.

New Jersey, December 20
Enjoy a fond farewell to Teemu Selanne, as presented by the nine players on our roster who were already in the league when he broke in.

Washington, December 23
Why does this old guy’s coach keep giving everyone the finger?

Calgary, March 12
Wait, isn’t that the guy who just helped Finland eliminate Team Canada from medal contention in Sochi? Get him!

Colorado, March 14
Come say good-bye to a departing legend who never played here as far as anyone in the hockey world remembers.

Vancouver, April 7
Please accept this commemorative “Enjoy your last game ever in Vancouver!” card signed by everyone in our organization, and try to ignore the fact that the cover prominently features the scratched-out name “Roberto.”

Los Angeles, April 12
Oh, cool, this would have been Selanne’s last game in L.A. if the Ducks hadn’t traded him to us at the deadline.