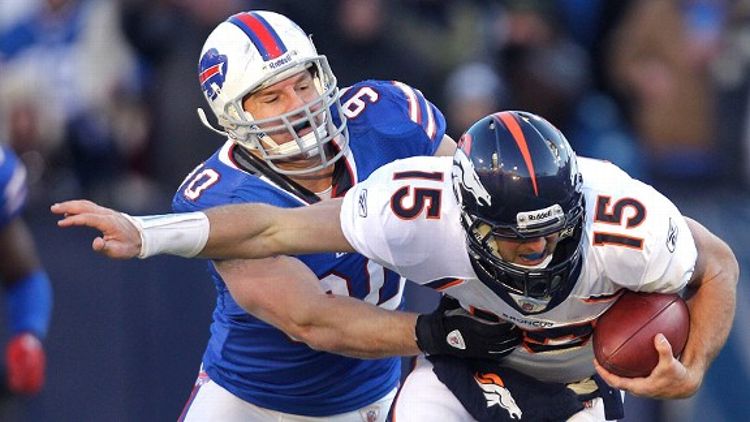 It’s a wrap on Week 1 of the BQBL playoffs, and I’m sure you all followed the rules to the letter, right? What? You completely disregarded them and did your own thing? That’s cool. We’re laid back here at The Triangle — and we’re too full from the holidays for discipline. That ham was good. It was almost as good as watching the definition of “Tebow Time” morph from “miraculous comeback” to “devastating defeat.”

Denver Broncos (Tim Tebow), 89 points: Did you really think Timothy Richard Tebow would win this game and answer the “Will the Broncos make the playoffs?” question before the final two minutes of next week’s showdown against the Kansas City Chiefs and his neck-bearded predecessor, Kyle Orton? If you did think that, then you don’t understand Tebow’s modus operandi. You see, Timothy Richard is running a long con. It once looked like Tebow’s master plan was to be an atrocious starting quarterback until the very last second of a game, when the hope amongst his faithful had waned. Then he would defy all odds to lead the Broncos to a win. That’s not the case — that’s too micro. I’m hip to you, Timothy Richard; I know you think bigger than that. Tebow’s game plan isn’t to let a game go to the final seconds and then win it. His plan is watch the Broncos’ season to go to the last game and then win that in the final seconds. This week, Teebs did everything he could to make sure the Broncos left their season in the balance headed into Week 17. Let’s see: 4 picks, 2 pick-sixes, 43 percent completion, 185 yards, 10 carries for only 34 yards, and a fumble. And you still don’t think he’s jobbing us all for a miraculous comeback next week? It’s adorable how naïve you are.

St. Louis Rams (Kellen Clemens), 62 points: At this point in his life, every time Kellen Clemens starts a game, he knows his performance has implications on the rest of his football career. Kellen Clemens does not deal with that kind of pressure well. This Saturday, he completed nine passes on 24 attempts for 91 measly yards. In the entire football game. If I were Kellen Clemens’ agent, I would be booking studio time to put together his NFL analyst demo reel right now, and I’d start dropping hints about what a big personality he has. If I was a member of Kellen Clemens’ family, I would be excited about all the free time he is going to have next winter to finally fix the shutters.

New York Jets (Mark Sanchez), 57 points: Mark Sanchez’s two picks, safety, and fumble sure made the battle for Dirty Jersey supremacy pretty darn one-sided. There is one thing about Sanchez’s quarterbacking abilities this season that has become crystal clear — he is so intercepty throwing the ball down the field, they rarely even allow him to do it. Rumor has it that after Sanchez’s Sunday night debacle against the Ravens earlier this season, Rex Ryan retooled the playbook so there were no passes longer than the distance from his back to his belly button.

Below are the rest of the scores. Congrats to everyone who made their BQBL championship.

The Triangle Takes a Holiday Break