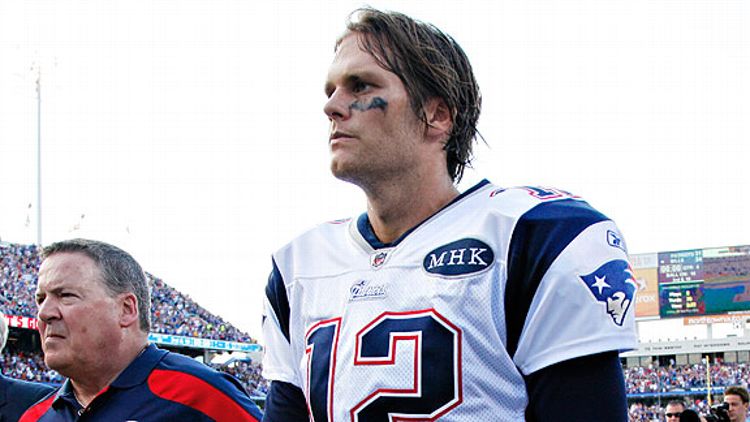 After only three weeks, it is clear no quarterback is going to go an entire season without finding himself atop the weekly BQBL leaderboard. Ask Ben Roethlisberger. Even when you have Hall of Fame stats, Super Bowl rings, and a supermodel wife, at some point, you are going to end up next to Mike Kafka and Andy Dalton on the BQBL Summer Jam screen. Yes, I am talking to you, Tom Brady. But before we get to our beUGGed hero’s four-interception week, let’s take a look at a couple of rule amendments and clarifications:

Moving Forward: Quarterback sacked for a safety — 20 points
Safety sacks are the quarterback’s fault. If you are playing QB and you are standing on painted grass, you should either throw the ball immediately or spike it and celebrate a touchdown. These points will not be counted retroactively. Sorry, Jaguars owners.

If you have three teams on a bye week at the same time, you start only one team that week.
I know this is rare, but each league is its own unique snowflake, and we have gotten this question a few times. Most teams score positive BQBL points each week, so this will likely hurt a score rather than help it. To be clear: That still does not mean you can start your team during a bye week.

Philadelphia Eagles, 53 points: The Eagles’ two-pronged BQBL turnover attack with Michael Vick at his worst and Mike Kafka at his intercept-iest tag-teamed for a huge 53-point week. Vick finished off the Eagles’ opening drive with a pick and then added two fumbled snaps before the half was over. In the second half things didn’t get any better for Vick, but they did improve for Eagles BQBL owners. After getting knocked around all day, Vick took another shot as he released and went down with a bruised hand, which opened the door for Mike Kafka.

After completing 7-of-9 for 72 yards and no interceptions in Vick relief last week, there was a faint voice in Kafka’s head that whispered, “You know, Mike, that was kind of easy — I think you have what it takes to make it in this league.” Then in Week 3, after his first attempt was easily snatched by Giants cornerback Aaron Ross, that voice said a little louder, “Whoa. You see how easily he picked that? These guys are fast.” And after he ended the game with his second pick in only seven passing attempts, the voice in his head declared: “Mike, you keep this up and people are going to be talking about you instead of Franz when they use the term Kafkaesque.”

New England Patriots, 37 points: What the hell are you doing here, Tom Brady? You are literally having the best three-week span in the history of the NFL and here you are, a Top 3 BQBL scorer of the week. This wasn’t in the script. It says right here that you’re supposed to go 14-2 in the regular season, have 10 terrifyingly efficient 400-yard passing games, throw only seven picks, and then lose in the second round of the playoffs at home. Four interceptions in one week? A pick 6? There are a lot of cameras around, Tom, I know this is new to you and all, but after a pick, you should at least make an attempt to push the corner who intercepted the ball out of bounds at the one instead of ushering him into the end zone. If you keep this up, I will start questioning the authenticity of your hairline. No one wants that.

Cincinnati Bengals, 36: This week BQBLers had a game all their own. While in sports bars across America, the Bengals-49ers game was relegated to the dusty Standard Definition TV outside the bathroom, BQBLers were locked in and hoping for the worst. Alex Smith facing Andy Dalton — what could go right? Well, after looking decent for two weeks, we can finally say that Andy Dalton is who we thought he was. Against the Niners, he threw for 157 yards and a couple of picks on passes so inaccurate you would think they were thrown by BQBL legend Luke McCown. On Oct. 9, get to the bar early and secure your spot in front of the TV by the bathroom for BQBL Bowl II: Bengals vs. Jaguars. Should be a bad one.

As Kyle Orton keeps leading the Broncos in defeat, it seems like only a matter of time before the BQBL gets to bask in the light emanating from Tim Tebow. In anticipation of this glorious event, the BQBL has decided to keep an eye on all of Tebow’s game-day activities, starting with the second half of Sunday’s matchup with the Tennessee Titans:

9:35 left in the 3rd quarter: Tebow is standing stoically on the sideline with his arms crossed, wearing a baseball hat. Brim flat.

9:32 left in the 3rd quarter: Now Tim has his thumbs hitched into his hand warmer, and his hat cocked about 15 degrees to his left. For his sake, we hope this is unintentional.

13:28 left in the 4th quarter: Camera is trying to shoot a dejected Orton but Tebow is in the foreground talking with a fella in street clothes. We hired a lip-reader who analyzed the tape and discovered he actually said, “You’re crazy, dude, I’m waaaaaay cuter than Brady Quinn.”

Game over: During the post-game love-fest on the field, Tebow gets a handshake and shoulder-pad bump from Matt Hasselbeck. They have the following exchange:

Check back next week for more updates on Tebow’s headgear, sideline conversations, and … well, that’s about it until he plays.

Tampa Bay Buccaneers, 26 points: When your team’s quarterback’s best play of the game was a hard count that drew the defense offside, it is safe to say that you had a good week in the BQBL.

Indianapolis Colts, 26 points: Colts fans, are you ready for the Curtis Painter era? Everyone who owns the Colts in the BQBL is. Painter showed just enough promise to really make the impending disappointment sting.

San Diego Chargers, 22 points: The Chargers shouldn’t beat the Chiefs by a field goal, Philip Rivers shouldn’t throw two picks, and Norv Turner shouldn’t make it to Week 5 without getting berated by his quarterback. Are you listening, Chargers?

Minnesota Vikings, 22 points: All things considered, Donovan McNabb had a solid game. He had no protection all day, and had the Vikings up 20-0 at halftime. If it wasn’t for the vote of confidence he received earlier in the week he wouldn’t have scored this high. Vikings BQBL owners, be wary of starting McNabb next week against the Chiefs; he has an “I still have it” game left in him.

Atlanta Falcons, 21 points: Is Matt Ryan an elite NFL quarterback? Or do you just think that because other people do?

St. Louis Rams, 18 points: If you own a team in the BQBL that is facing the Ravens, you start them. Again, ask Ben Roethlisberger.

Carolina Panthers, 16 points: Cam Newton is no longer the best quarterback in the history of the NFL to never win a game. Week 3 proved that only Mother Nature can stop Cam Newton from throwing for 400 yards, turning the ball over, and making you seriously consider becoming a bandwagon Panthers fan.