The Axeman Cometh: Del Rio Out as Jaguars Are Sold 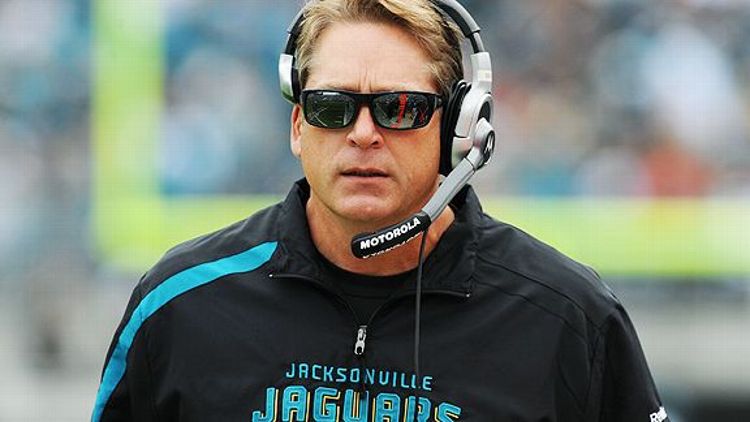 If you happen to be in the greater Jacksonville area and see a man wearing Oakley sunglasses at night, driving an El Camino with a 24-pack of Stroh’s riding shotgun, and singing Johnny Cash’s version of “I See a Darkness” at the top of his lungs, that’s probably Jack Del Rio because today he was fired by the Jaguars.

I might be giving him a little too much credit in the personality department, but it can’t be too far off. This is, after all, a man with a highly publicized team-motivating tactic that involved a stump, an ax, the Kenny Powers-esque mantra “Keep Choppin’ Wood.” And that ended with punter Chris Hanson nearly hacking off his leg. I, for one, am shocked they never got that into Friday Night Lights.

This season the Jags aren’t just boring — they are bad, dysfunctionally so. They are also boring, but that’s beside the point. On Sunday, the Jags lost, quarterback Blaine Gabbert was benched, and then Del Rio threw offensive coordinator Dirk Koetter under the bus for not using a timeout at the end of the game, even though calling timeouts is basically the bare-minimum requirement of a head coach on game day.

Jack Del Rio’s reign in north Florida was a lot like a CBS procedural, just mediocre enough not to get canceled and not spectacular enough to draw much attention. Aside from a 12-4 2005 season and an 11-5 run in 2007, Del Rio’s Jags hovered at around .500 (or worse) for most of his tenure.

I’m sure Del Rio has his admirers both within Jacksonville and the greater NFL coaching community. And with the news that the Jaguars had been sold by Wayne Weaver to auto-parts magnate Shahid Khan, you have to think maybe Del Rio knew his time with the team was limited. At Tuesday’s press conference, outgoing owner Weaver claimed Khan would keep the Jags in Jacksonville.

Here’s the thing: This is not the Tampa Bay Rays. In the end, it’s hard to imagine people ignoring the Jags for any other reason than Del Rio, Weaver, and GM Gene Smith put a bad, clearly unmotivated product on the field.

The Jags will be coached, in the interim, by defensive coordinator Mel Tucker. As currently constituted, I don’t know that the team can be much better than it is, but with Del Rio out of the picture and change on the horizon, it can try doing the one thing it has failed to do for a long, long time: attempt to entertain its fan base. That’s a start.

A Careful Analysis of the Trailer for A Warrior's Heart