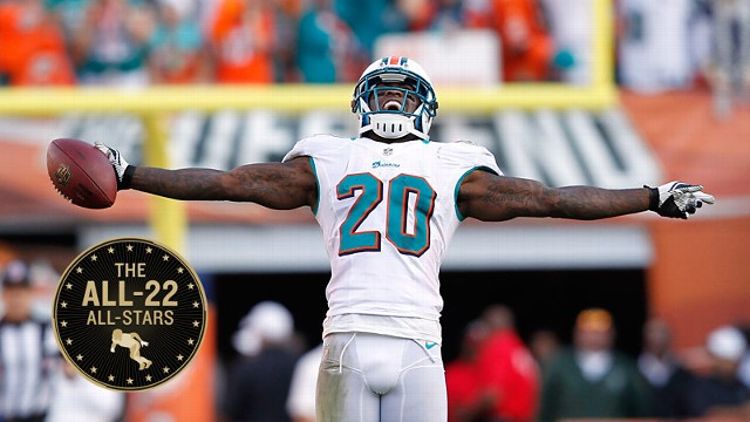 Reshad Jones wasn’t ready, but he didn’t have much choice. The rookie safety from Georgia had played sporadically throughout his first NFL season in 2010, notching a random tackle here or there, but in the second half of the Dolphins’ Week 10 game against Tennessee his role expanded far beyond part-time. When starter Chris Clemons went down, Miami secondary coach Todd Bowles tapped the fifth-round pick as Clemons’s replacement. “I wasn’t ready mentally, but I felt that physically, I could play the game at a high level,” Jones says.

It didn’t take long to find out. On back-to-back plays in the fourth quarter, Jones threw Vince Young down for a sack and intercepted him in the end zone, effectively ending the game. Each big play was his first as a pro.

No one was concerned about Jones’s physical attributes when he came out of Georgia. At 6-foot-1 and 215 pounds, with a 40-yard dash time in the 4.5 range, the “height-weight-speed” element of the evaluation was always there. Jones, who left college a year early in part because of what he says was a “second- to third-round” grade, never wanted to know why he slipped into the fifth. “My agent couldn’t even tell me,” Jones says. “That’s how it goes sometimes as a player. Like I said, I wasn’t going to get down on myself or hang my head. I knew I could play football.” At the time, Jones’s shortcomings dealt mostly with consistency and turning those physical gifts into practical football skills. He would often miss tackles in favor of going for the big hit, and his instincts as a pass defender hadn’t caught up with his other natural talents.

Years as a pro: Four

Game in 25 words or fewer: A big safety with exceptional athletic ability who has improved his coverage and instincts and is able to be a punishing force on ball carriers.

For his first season and a half in Miami, that natural ability was still enough for Jones to get by. He spent most of 2011 as a starter. But Jones says this past season was the first time he felt totally comfortable in the professional game — and it showed. He finished the season with four interceptions, another nine passes defensed, and 95 tackles. “[Last season] is when the game slowed down for me,” Jones says. “That was my second year starting, and I could go out and recognize formations, things like that. Being able to anticipate things, and instead of playing on natural ability, I was able to react, play faster, and make plays.”

Last year was the first for Jones under Miami’s new coaching staff, but it was enough for him to earn a contract extension this offseason. Instead of entering the final year of his deal in 2013, Jones was given a four-year, $29.3 million deal with $15 million in guarantees. It’s a figure that puts Jones just below Eric Weddle and Dashon Goldson, both of whom were voted All-Pro a year ago. Jones had better get used to that company.

By the end of Jones’s redshirt junior year at Georgia, he and head coach Mark Richt were finally on the same page when it came to Jones’s NFL plans. Jones was ready to leave after his third year in Athens — and his only year as a starter — but he says Richt convinced him to come back for at least one more season.

It was sound advice. Even with an extra year as a starter, Jones fell all the way to the final pick of the fifth round, for which Miami traded up to get him. Along with concerns about his coverage skills and instincts, there were also rumblings that Jones’s effort waned at times. In the end, the Dolphins got a two-year SEC starter a full two rounds later than many expected him to go.

Jones says that his fifth-round status mattered until the moment he arrived at his first practice. “First round, second round, third round, it doesn’t matter at that point,” he says. That was evident in the staff’s willingness to throw Jones into the mix as early as it did, and by his second year, the fifth-round pick was a full-time starter. Jones’s learning curve was in his understanding of both Miami’s playbook and of what opposing offenses were looking to accomplish. “It was hard for me to pick up everything thrown at me,” Jones says. “It’s a business and a job up here. It’s not like [college], where you’re going to be on the team for four years and see the same guys for two or three years. It humbled me.”

When Lou Anarumo arrived as part of Joe Philbin’s coaching staff last summer, he came up with a familiar evaluation of Jones. “Like a lot of young players, he had to learn how to be more consistent,” Anarumo says. What was clear, though, is that Jones had rare athleticism, even by NFL standards. “I thought he was athletic on tape, but once you get to work with him, you see that he can do a number of different things,” Anarumo says. “He can play a deep zone. He can play a slot receiver. I didn’t know he would have all that stuff. It was a pleasant surprise.”

This is a play that shows off a bit of that versatility, and it’s the first one Jones mentions when asked about his season. Before the snap, Jones is lined up down in the box, but as Aaron Hernandez runs a wheel route out of the backfield, Jones is tasked with staying with him step-for-step up the sideline. “I think [Tom Brady] hadn’t thrown an interception in one hundred and something passes, some crazy number,” Jones says. It was actually 189 — a streak that included five whole games. What we can’t see here is that Jones takes the interception and goes all the way up the left sideline for a touchdown — one that was called back for a penalty on the return, but that makes the play no less impressive. Another argument for Jones’s versatility came in the same game, when he sacked Brady on third down deep in Dolphins territory.

Players talk about the game slowing down as they enter their second and third seasons, but finding instances of it is more difficult. One area where Jones seems to excel is in flying up toward the line of scrimmage to make tackles on short pass plays. It doesn’t show up in his raw totals, but it’s the sort of play Jones made over and over last season — like here, as he causes C.J. Spiller to fumble in the middle of the field — and one he credits to a better working knowledge of opposing offenses. “That’s about preparation, knowing what types of routes are coming out of what types of formations,” Jones says.

Anarumo has seen Jones’s understanding of opposing offenses evolve since joining the team.

“It all goes back to him feeling good not only about himself and what he’s supposed to do, but now he can concern himself with what the offense is going to do and how they’re trying to attack the defense,” Anarumo says. “Now he can be reactive, and can do it quickly.”

Coverage is where Jones has improved most, but his tendency to look for the highlight-worthy hit hasn’t faded — and that’s not necessarily a fault. Jones still missed a few too many tackles last season, but he also made plays like this. The chance for safeties to lay out receivers coming over the middle is (rightfully) all but gone, but the opportunity to bring physicality against the run is still there, and it’s one Jones takes advantage of. “The coaches in this organization want physical safeties,” Jones says. “I’m one of the leaders of this defense, and I want to be known as one of those guys who’s a wrecking force.”

When Miami began its OTAs this spring, Jones was absent. He wanted his contract situation solved before the season began. “There was a little worry,” Jones says. “Like I told our general manager, it was something that was on my mind. Like for every guy, it would be coming into their contract season. There are so many things that can happen.” That worry is now gone. Jones knows where his future is.

The new contract comes with new expectations. Big-time money demands big-time play. The Dolphins expect Jones to be one of the best safeties in the league. This kind of expectation hasn’t been limited to Jones this offseason. With Clemons healthy and the addition of Brent Grimes, the Miami secondary figures to be much improved from a season ago, and with all their offseason spending, the Dolphins could surprise in a weakened AFC East. “We look good on paper, and we look good working with each other, but this is a tough league,” Jones says. “The margin of error is small.”

At this point, the former fifth-round pick is used to having to earn it. “It makes you feel even better that it wasn’t given to you,” Jones says. “I had to go into this league and prove myself. It was hard. That makes you cherish it.”