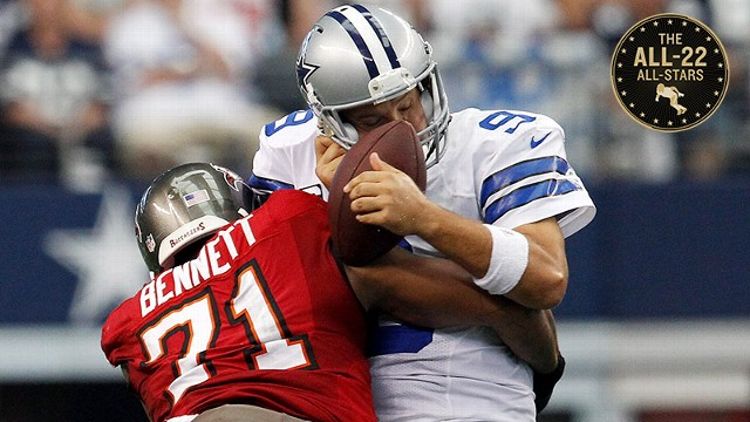 When Michael Bennett arrived as a newcomer to Seahawks practice this offseason, he was doing so for the second time. Four summers ago, Bennett was an undrafted free agent from Texas A&M, and that first training camp was spent clawing through two practices a day for a roster spot. “When you first come in, and you’re undrafted, every day is a game for you,” Bennett says. This year, Bennett returned to Seattle, and this time as a bigger deal.

Following the best season of his career with Tampa Bay in 2012, Bennett received a one-year, $4.8 million deal from the Seahawks this offseason. It was a surprising move in more ways than one. After a nine-sack season in which he started all 16 games, Bennett (and others) figured he’d be in line for a considerable multiyear contract. But the market for defensive ends — and most other positions — never materialized this summer, and Bennett, who played last season with a torn rotator cuff and will again in 2013, was left to enter this season again forced to prove he was deserving of a long-term contract.

Game in 25 words or fewer: A versatile defensive lineman capable of playing both end or tackle in nickel situations; one of the league’s best run-defending ends

Some considered Bennett and Cliff Avril the top two defensive ends available in free agency this offseason, and when both signed with Seattle, some were confounded. The Seahawks’ interest in Bennett, even with Avril in the fold, speaks to the diversity of roles he’s played all the way back to college. In Tampa Bay, Bennett played defensive tackle and defensive end — a task that will continue with the Seahawks. And in an era when many of his peers are content to tear after the quarterback on every play, Bennett remains one of the best run-defending ends in football. He’s proven to be a relentlessly disruptive force — the quintessential “Who was that?” player.

Bennett says he had more than one multiyear offer following last season, but the money wasn’t worth passing up $5 million and another chance to audition, this time as part of an elite defense. It’s a risk, but for a player who was never guaranteed a roster spot, it’s wasn’t all that daunting. “I’m willing to take that chance to prove that I can do it again,” Bennett says.

The Seahawks never wanted to lose Bennett in the first place. When Seattle let him go five weeks into his first season, Bennett says, it did so hoping he’d still be around after clearing waivers. More than one team put a claim in for the pass-rusher, who’d had a strong showing in the preseason, and the Bucs, owners of the worst record among the interested teams, were awarded Bennett on October 12.

Bennett played sparingly in his first two seasons in Tampa, starting just two games in 2010. His opportunity came, in part, because of the 2011 lockout. As Raheem Morris told the Tampa Bay Times before that season, it was during his extended downtime that he began to notice Bennett’s play on film. That spring, Tampa had taken defensive ends in the first and second rounds of the draft, but when the season began, it was Bennett, and not second-round pick Da’Quan Bowers, that was awarded the starting role opposite first-rounder Adrian Clayborn. After a strong 2011 campaign, Bennett was once again named the starter last season (Bowers tore his Achilles the previous spring).

Bennett’s fourth season was by far his best as a pro. With Clayborn missing most of the season with a torn ACL, Bennett led the Bucs in sacks while once again proving a smart and effective run defender. It still wasn’t enough. When the season ended, Tampa Bay let Bennett walk in favor of the younger Bowers. “They never took a chance to try to develop me,” Bennett says. “I was a player they were just trying to replace. Every year I had the best statistics on the defensive line, no matter how much they were paying the other guys.

“That’s just how it goes sometimes. When you go undrafted, they think there’s a reason you were undrafted.”

Like several other players this offseason, Bennett was shocked at the lack of interest in his services. “I thought once Cliff Avril went, everything would fall into place,” Bennett says. “He was ranked no. 1, and I was no. 2. When I saw his deal, I was like, ‘Oh, shit, it’s going downhill from here.’ Because you expect he’d go into the 10-plus millions in a year.” Avril was signed by the Seahawks to a two-year contract worth just $6.5 million per year. Some speculated that a torn rotator cuff hurt Bennett’s value, but he and Seahawks general manager John Schneider have refuted that report. “I played the whole season like that!” Bennett says. “And there was no drop-off in my play.”

Why Bennett landed in Seattle doesn’t matter much now. What’s important — for both him and the Seahawks — is that he spends 2013 showing what’s made him one of the more unique defensive linemen in the league.

Let’s begin with a play Bennett considers his favorite of last season. (“My brother [tight end Martellus Bennett] played [for the Cowboys], and they didn’t keep my brother, so I had a little thing — they were messing with my family.”) At 275 pounds, Bennett is big for a defensive end, which is one reason he plays primarily on the left side. It also means that when it comes to strength, he has an advantage over smaller, speed-rush types. Jason Witten is not a small man, but he looks it here as Bennett jolts him backward before dropping Tony Romo.

His pass rush skills aren’t limited to strength, either. Bennett’s best game as a rusher came against the Eagles last season, when he tallied two sacks, a couple more hits, and several hurries. Here, we see a two-part move. He takes a step inside before moving back out, and although it happens so quickly that it’s difficult to notice, Bennett’s subtle rip past the right tackle is what finally allows him to get to the quarterback. Only a talented, refined pass-rusher is capable of a play like this — the sort that Bennett was not earlier in his career.

Pass-rushers, though, are not rare (unless you’re talking about Tampa Bay’s current roster). Where Bennett is best, in relation to his peers, is in the run game. It’s no accident. “I think a lot of guys are scared to get their nose dirty,” Bennett says. “I’m not afraid of contact. I don’t like being a situational player. I like being in every play because that’s how you make an impact on the game, whether you’re blocking a pass, getting a TFL, setting the edge. That’s how you become a great player. I think over time, we took being a good player and made it about chasing the quarterback every play. You’ll watch a lot of guys, and some of their stuff doesn’t look good on film. You’ll see the running back right there, and he’ll run by him because he’s trying to get a sack. They put such a big emphasis on getting sacks and not being an all-around, complete player.”

According to standard metrics — like yards per carry allowed — Tampa Bay had the best run defense in the league last year. By some advanced measures, it was one of the best run defenses ever. Adjusted Line Yards, a Football Outsiders statistic that attempts (as much as possible) to remove the running back from run-game performance, rated the Bucs the fourth-best rushing defense since FO started tracking the stat in 1995.

Watch tape of the Buccaneers stop the run last season, and you’ll see a unified objective. And Bennett is right in the middle of it all. In the play above, from Week 1 against Carolina, Bennett gets penetration so quickly that he diverts the path of the pulling guard. This allows Lavonte David — last year’s second-round pick, who had an excellent rookie season — to fly up and take on that guard three yards deep in the backfield, actually knocking him back into Dengelo Williams. By now, the play is two seconds old, and Williams is stuck in the backfield with no momentum and no help. The result is a four-yard loss.

In a room full of TVs with a half-dozen games going at once, Bennett was a player who demanded attention, finishing plays around the ball no matter where it ended. This is a play from Week 8 against Minnesota. From Bennett’s first step, he knows he’s in trouble. Seeing right tackle Phil Loadholt loop to the outside, Bennett instantly, and desperately, begins fighting back that way, trying to swim his right hand over Kyle Rudolph as soon as the tight end makes contact. It doesn’t happen right away, but Bennett’s feet never stop. Eventually, Rudolph is picked off in traffic, and Bennett is free to make the tackle for a loss.

When Bennett signed with the Seahawks, Schneider confirmed that his role would be mainly as an interior rusher from defensive tackle. That role may change, considering the injuries to Avril and Chris Clemons that may leave Seattle thin at defensive end to start the season, but if the plan is to use Bennett inside, the Seahawks know it’s a place where they can find an advantage. Having a good outside rusher who can also hold up against the run and line up over guards will consistently create one-on-one mismatches, and it also opens a considerable set of possibilities for different lineups and line schemes. This is another play from the Bucs’ game against the Eagles, and here, Bennett is lined up with Gerald McCoy as a defensive tackle. Tampa runs a twist inside, with Bennett looping all the way around the guard. Typically, this play would take much longer to materialize. With Bennett, it quickly turns into a sack.

Bennett still believes that how he came to Seattle the first time played some part in why he’s returned. “[Going undrafted] follows you,” Bennett says. “You look at free agency this year, and no matter what their statistics, where they were drafted got them more publicity than a guy like me, who was coming off one of the better seasons of any defensive end in the league.” Rather than view it as a slight, though, he sees it as just one more opportunity to show how far he’s come since that first preseason in Seattle. “I’m like ‘Man, this is where I started,’” Bennett says. “This is where I got my chance. And now, I’ve got another chance.”