The All-22 All-Star Team: The Vikings’ John Sullivan 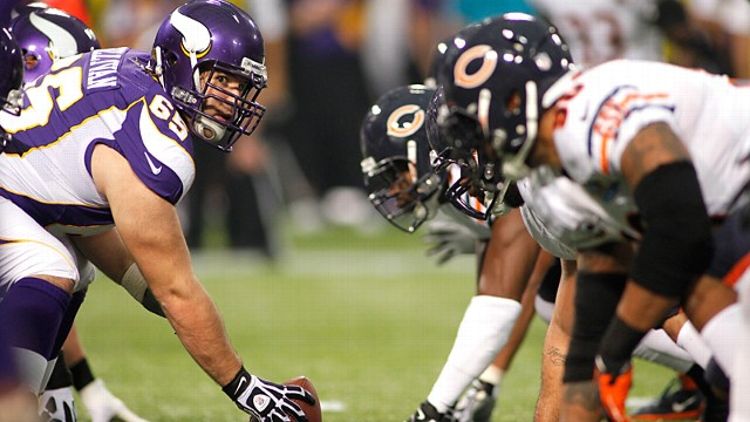 The NFL is a nearly perfect television product. But the way football is presented limits our ability to understand the game. On a 100-yard field populated by 22 men, a press-box camera fixated on the ball leaves us without a proper vantage point of the game’s stats-free players. The result is that for some of the NFL’s elite, their performance and reputation — both among fans and among their peers — remains uncelebrated or misunderstood. The All-22 All-Star Team is an attempt to provide some insight on the sport’s 22 most underappreciated players. Some will be All-Pros who haven’t fully gotten their due; some will be names few casual fans have ever heard. All will, for one reason or another, have been overlooked.

The series begins with a player at one of the league’s most discounted positions — Vikings center John Sullivan.

A hulking stack of boulders. That’s one description you might hear. Even when people don’t know the names of the NFL’s men up front, they know their look. They are football’s towering, block-out-the-sun maulers, unmistakable and impossible to miss. It’s not easy to be nondescript among offensive linemen, but somehow John Sullivan manages to pull it off. A 6-foot-4, often-bearded man who spends most of his year in the Twin Cities, the Vikings center hasn’t had many meals interrupted in his five years playing pro football. “Most of the time, people don’t see me and think ‘NFL football player,’” Sullivan says. “I’m not built like your traditional barrel-chested offensive lineman.” On the streets in Minneapolis, Sullivan seems, well, ordinary. Inside the Metrodome, he’s anything but.

The 27-year-old Notre Dame graduate is the second-longest tenured member of the Vikings offense, and like his MVP running back, Adrian Peterson, he has proven to be perhaps the NFL’s preeminent player at his position. For the most part — whether it’s his lack of that barrel chest or the plainest Irish name imaginable — that fact has gone mostly unnoticed. What’s remarkable about Sullivan’s success is just how unremarkable it appears — a product of acumen and subtle physical tools that, while easy to miss, have made him one of the best football players in the world.

As with any other occupation, success in the NFL involves learning what constitutes being a professional. For many rookies, that means gleaning habits from established veterans at their position. When Sullivan arrived in Minnesota as a sixth-round pick from Notre Dame, he was the backup to Matt Birk, the Vikings center who’d been to the Pro Bowl in each of his past two seasons. Next to Birk was Steve Hutchinson, then in his third season with Minnesota and already one of the best guards in league history. “I got to learn from Matt and see how he went about things,” Sullivan says. “That goes from on the practice field, to some extent, and on game day as well, but it extends beyond that. It’s just how they handle themselves around the building, how they treat other people within the organization, the approach that both Matt and Steve both took to the game. I give the same advice to younger plays nowadays: Find an older guy, find a veteran player who’s had the type of career that you envision yourself having, and try to emulate them.”

Coach’s take: “He’s really smart, I’m talking exceptionally smart. By the time we get to Sundays, he knows what all 11 guys are doing on every play. I don’t think there are many guys you can say that about, except the quarterback. I think that’s what truly sets him apart.” —Jeff Davidson, Vikings offensive line coach

Nomination for the All-22 team: Ray McDonald, defensive tackle, 49ers; “He’s one of the best players you play against on the defensive line — anywhere in the league, not just the NFC.”

Game in 25 words or fewer: A quick, cerebral center who relies on precise footwork, leverage, and hand positioning to be effective at both the first and second levels.

By Sullivan’s second season, Birk had departed Minnesota for Baltimore, and at 24, Sullivan became Minnesota’s starting center. It was a trying first two seasons. In 2010, his frustration reached its peak. Torn calves on both sides limited his mobility, and Sullivan struggled for a 6-10 Vikings team.

His break would come the following year — thanks to a confluence of circumstances. The Vikings welcomed a new offensive coaching staff that offseason, and Sullivan instantly took to the scheme championed by new line coach Jeff Davidson. By Minnesota’s first padded practice, he knew things were about to change for him.

In Darrell Bevell’s old offense, Sullivan says, the blocking scheme was concerned with every potential choice individual defenders could make. As a center, he’d place a hand on a backside defensive tackle, check for a slanting 3-technique, and try to work his way up to a linebacker — all on a single play. Imagine a hitter trying to hit three different pitches, at different points in the strike zone, at the same time. With Davidson and new offensive coordinator Bill Musgrave, the approach was defined by a single mantra — attack. Every offense has certain keys in a given game plan, but Sullivan says Minnesota’s new system didn’t “sacrifice being aggressive in order to have all our bases covered.”

“If a defense guesses right, if they slant and a guy’s not covered, hats off to them,” Sullivan says. “But we’re going to kick your ass every other time.”

The scheme change was coupled with a physical comfort Sullivan had never felt during his NFL career. He was healthy for the first time, and at 26, felt stronger and more physically mature than he had in years past. “It was a good fit from the start,” Sullivan says. “That’s when things really started to click.”

No matter whom you ask, whether it’s coaches or teammates, the first answer anyone gives about what makes John Sullivan exceptional is the same — his mind. Sullivan went to Notre Dame after graduating from Greenwich High School in Connecticut; Musgrave still remembers recruiting him while he was the University of Virginia’s offensive coordinator. “He’s very sharp,” Musgrave says. “Nothing on the football field surprises John.”

That intelligence manifests in Sullivan’s preparation. Musgrave says that as Minnesota game plans on Monday and Tuesday, they do so at a graduate level, thanks in large part to his center. “He’s able to see the entire defense,” Davidson says. “He knows what to expect based on linebacker location, safety location, different alignments out of the nose guards. All the stuff that he can accumulate over the week, it all means something to him.”

Listening to Sullivan give examples is like listening to someone explain individual parts of a computer — we’re used to the basic function but are totally unfamiliar with what actually makes it run. “If a two-eye has his hand down and there’s a safety on his side rolling back to the middle of the field, do I think I’m getting pressure away from him?” Sullivan asks to no one in particular. “Yeah, I’m almost 100 percent certain I am.” Individual plays are won on Tuesday, not Sunday. “I generally have the answers to the test before I go out there,” he says.

“I hate saying this for a guy that’s currently playing for me,” Davidson says, “but he’s one of the best I’ve ever been around, in that I truly believe that I could walk out of the room and he could run the meetings.”

Sullivan’s mental aptitude is his most significant advantage, but most Mensa members can’t block Justin Smith. Sullivan has never been an overwhelming physical force, but he brings tools that make up for his lack of conventional athleticism. In high school, Sullivan was the heavyweight state wrestling champion three times, and as a senior, he placed seventh in the national meet. Both Musgrave and Davidson noted Sullivan’s wrestling background when describing his success. “Balance, hand strength, leverage, being underneath people, inside hands — all those things make a big difference,” Sullivan says.

“Hand strength” comes up in each conversation about Sullivan — a nebulous term that would seem to be a prerequisite for anyone engaging in the close combat of the line of scrimmage. What it means, Davidson says, is that when Sullivan latches on (which he’s able to do based on the angles afforded by his pre-snap reads), he isn’t letting go. By staying in constant contact, he’s able to make an opponent’s momentum his undoing. “He’s able to finish plays, not necessarily in an overpowering way or an explosive manner, but he’s always leaning on you,” Davidson says. “Anytime a defender goes to make a play, he can finish him in that direction.”

The Vikings’ offense featured the best player — and one of the best stories — in football a year ago, but the Minnesota running game is actually home to the league’s top player at more than one position. And as much as he doesn’t want to admit it, Sullivan acknowledges that one feeds the other. “Everyone on the offense has a job to do; it’s a system,” Sullivan says. “In theory, you should be able to take any piece out and put another piece in, and the machine should still function. Should having Adrian in there change things? No. But obviously, it does.”

For one, there’s a tendency, conscious or not, for offensive linemen to hold blocks just a tiny bit longer.

In the fourth quarter of Minnesota’s Week 10 win over the Lions, the Vikings had the ball on their own 39-yard line. The play was an outside run to the right, and Sullivan’s responsibility was the middle linebacker. With no action other than the movement to the play side, cutting off a linebacker aligned essentially head-up is a difficult task. Not only did Sulivan get to him, he managed to work all the way to the linebacker’s play-side shoulder, walling him off from Peterson and allowing for a 61-yard touchdown run. “You know if you put in that extra effort, it’s going to be rewarded tenfold,” Sullivan says. “It’s not saying we don’t do the same when Toby [Gerhart] has the ball, but Adrian is a special player, and it’s inspirational to play with him, to the point that it makes you play that much harder.”

It isn’t in the quality of play from each man but in how that play will be recognized. Offensive linemen are almost universally unheralded, but Sullivan remains the overlooked of the overlooked. After two years as arguably the league’s most effective center, he has yet to be selected to a Pro Bowl. He was voted All-Pro by the Pro Football Writers Association in 2012 but snubbed by the AP. Nowhere is the NFL’s dispersal of accolades more broken than for interior offensive linemen, where name recognition trumps all else. (An example: Jeff Saturday, who was relieved of his duties as the Packers’ center last season, was invited to the Pro Bowl.) For the past two seasons, Sullivan has been its chief victim.

Sullivan sounds resigned when discussing it. “I’d love to go to the Pro Bowl,” he says, “but the Pro Bowl system is what it is. When I retire, I’d like to be a guy that my teammates all say, ‘We could count on him.’” It’s a platitude, but it’s true. A center is responsible for everyone around him.

Musgrave is equally resistant to discussing Pro Bowls, or where his center ranks. He does his best to speak without saying anything. In doing so, he says everything.

“I can’t imagine anyone else anchoring our offensive line but John,” Musgrave says. “We’re not in the market for a center at this stage, and hopefully we won’t be for a long time.”