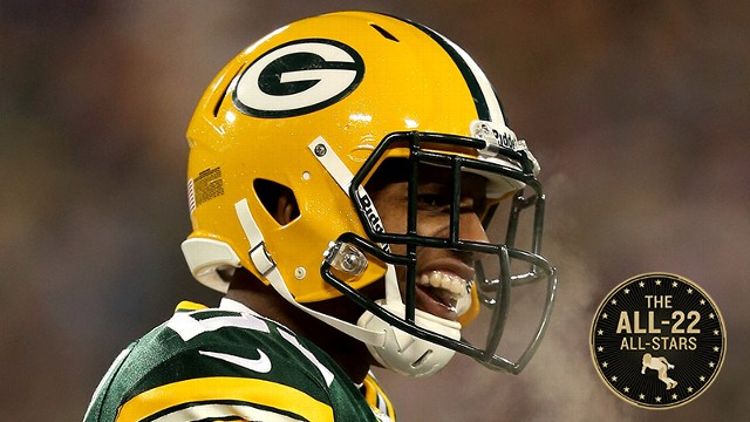 The concept isn’t new. It was first implemented in 1992, when Dom Capers arrived in Pittsburgh as a first-time defensive coordinator for Bill Cowher’s new Steelers staff. As any new coach would, Capers spent his early days surveying the talent in place. The latest in Pittsburgh’s lineage of defensive stars was Rod Woodson, then a 26-year-old cornerback fresh off his third straight trip to the Pro Bowl. In evaluating Woodson, it struck Capers that maybe there was a way in which his best defensive back could have even more impact on the game. Lined up on a receiver outside the numbers, there was only so much Woodson could do to influence a given game. But moving him inside, to the nickelback in passing situations, could really change the makeup of the game.

“My feeling when I looked at Rod outside was that he was matched up one-on-one, and he’d do his job, but I thought he could be a lot bigger factor in the game putting him inside,” Capers says. “He’s closer to the ball, he could get his hands on more balls, and you could blitz him. He’s going to make a lot of plays.” In his second year in Capers’s defense, Woodson was named Defensive Player of the Year.

Seventeen years later, Capers had déjà vu. The only difference was the Woodson. When Capers came to Green Bay in 2009, Charles Woodson was the team’s best defensive player. For Charles, it took less than two years for him to become the Packers’ nickel corner. That season, he was the league’s Defensive Player of the Year and the team finished 11-5.

Coach’s take: “He came in and showed everybody that this wasn’t too big for him. He had a poise and a confidence that he could play high-level football. He had the respect of the older players because he didn’t make mistakes early.” —Joe Whitt, Packers cornerbacks coach

“He seemed to pick things up pretty fast. He’s bright. He has good football instincts. Some of these guys have ball skills, but they don’t have the instincts. Guys with instincts are normally in the right place; they have opportunities to plays.” —Dom Capers, Packers defensive coordinator

Game in 25 words or fewer: A slot cornerback who relies on a combination of patience, intelligence, and instincts to be a factor on nearly every passing down.

Casey Hayward is no Woodson, at least not yet. But in his rookie season, he emerged as the latest dominant slot corner in a Capers-led defense. After spending the early part of the season shifting between playing outside and inside, Hayward took over Woodson’s role in the Green Bay defense after the latter went down against St. Louis in Week 7. In Woodson’s absence, Hayward put together a season that required no “for a rookie” qualifiers. His six interceptions were fifth in the league, but they reveal very little about the overall impact Hayward had for a depleted Packers defense. At a position where first-year players rarely succeed, Hayward was among the elite. Now, entering his second season, he’s looking to redefine the importance of a team’s “third” cornerback.

Hayward wasn’t always a natural cornerback. At Perry High School, just south of Macon, Georgia, Hayward played quarterback. “I didn’t even play a single snap [at cornerback] until my senior year, and then I probably played six games at defensive back,” Hayward says, sitting in the Packers locker room, a towel draped over his head. “It wasn’t my full-time job. I subbed in and out, depending on the team.” He pauses for a moment, chewing on his last thought. “But I still ended up being a first-team all-state defensive back.”

It’s typical at the high school level for an excellent offensive player (Hayward was Region 4-AAA’s offensive player of the year in Georgia) who moonlights on defense to receive accolades over lesser-known defense-only stars. With Hayward, that wasn’t quite the case. He had four interceptions that senior season, three returned for touchdowns.

Hayward laughs when asked if he considered playing QB in college. “I could throw, though,” he says, a halfhearted self-defense. Coming out of Perry, there weren’t many offers from big-time schools, something Hayward has chalked up to his lack of exposure on defense. He eventually chose Vanderbilt, where he saw significant time in his freshman season. By his junior year, he led the SEC in passes defended. At the end of his senior season, Hayward was an All-American in the eyes of many voters. It was all enough for Green Bay to trade up with New England and take him with the 62nd overall pick.

A coach’s reluctance to play young cornerbacks is about one mistake. For other positions — say, pass rusher — occasional brilliance can eradicate the occasional misstep. For a defensive back, those missteps instantly turn into points. “These games are 65 plays, but they usually come down to two or three plays,” Capers says. “You don’t want to feel like you’re experimenting. You want to feel confident in a guy if you’re going to put him out there that he’s not going to be the guy that gives up those two or three plays that decide the game.”

Like the Packers do with all their rookies, Hayward was thrust into the fire on day one. In training camp, everyone competes for the same set of spots. Eventually, younger players get exposed. Capers and his staff quickly saw that Hayward never flinched. “Mistakes become touchdowns,” Packers cornerbacks coach Joe Whitt says. “That’s what was impressive with this kid. He didn’t make mistakes.”

Initially, Hayward worked on the outside. But during training camp, Capers asked that he learn the nickel role as well. “At first I was just going to work outside,” Hayward says. “He didn’t want to throw a lot of pressure on me right away. [The slot] is a unique position. You have to know a lot.” Along with the pedigree the position has in Capers’s defense, a major difference between playing inside and outside for the Packers is complexity. “Inside, there’s probably a little more on your plate in terms of learning — run fits, blitzing a little more,” Capers says. Hayward outlines the same two tasks, almost verbatim, and both he and Whitt mention that Green Bay’s defense can’t even get aligned without the nickel doing so first. It is literally the fulcrum of the defense.

By Week 8, a rookie was that fulcrum — and he just happened to be replacing a Hall of Famer. All Hayward did was put up some of the best numbers for any cornerback in the league. According to Football Outsiders, Hayward was fourth in the league in passes defensed, first in success percentage, and first in total defeats among cornerbacks. According to Pro Football Focus, quarterbacks had a 31.1 rating when throwing in Hayward’s coverage area — the best figure for any cornerback in football.

Hayward’s teammates and coaches point to two specific qualities that make him special: intelligence and patience. “He’s someone that knows the game,” Packers wide receiver Jordy Nelson says. “He understands concepts, route running, if one guy runs vertical, [he knows] what the other guy might be doing.” That concept can be seen above, in the fourth quarter of the Packers’ game against Indianapolis in Week 5. Lined up on Reggie Wayne in the slot, Hayward sees the outside receiver moving in just after the snap. He anticipates Wayne running a wheel route to the outside, and he has it the whole way. It all makes for what might’ve been the most impressive play of Hayward’s season.

“I think the biggest thing with him is his patience,” Packers slot receiver Randall Cobb says, echoing Nelson. “It’s hard to get releases off the ball on him.” That’s perfectly displayed in this Week 12 play against Victor Cruz and the Giants. On third down, Cruz comes off the ball only to have Hayward waiting (and waiting … ) for him. Hayward lets Cruz come to him, and the result is a third-down incompletion and another punt.

Hayward has a knack for big plays on third down. His best game came against the Lions in Week 11; he had five passes defensed and an interception. Three came on third down, and with the interception, it made for four possession-ending plays in one game. The one above came on the Lions’ first possession, just one play after Hayward batted down a pass intended for Brandon Pettigrew.

There was a time in the NFL, as early as a decade ago, when the conventional thinking for slot corners was that if they improved enough, they’d make their way outside. Playing outside the numbers came with prestige. Some derisively called the nickel the “third” corner.

Capers has defied that thinking for some time, but now NFL offenses are identifying the nickel corner as a key part of any defense. “This varies from defense to defense, but the amount of your sub package that you play nowadays — because we’re seeing more three wide receivers on the field — your inside player is going to play as many, if not more plays,” Capers says. “You could be in some form of your sub defense two-thirds [of the time].” The number Hayward throws out is 75 percent; Whitt says 80. No matter the math, the point is that the nickel cornerback is as much a “starter” as any other spot in the defensive backfield.

Whitt makes sure to mention that Hayward isn’t just a nickel cornerback. Hayward’s play last season was enough to ensure him a spot on the Packers’ defense in any situation. “If there’s three corners out there, will he ever play outside? I don’t think so. He’s too valuable inside,” Whitt says. “But if there are only two corners out there, he still has the skill set to be one of those two.” When he returns from a hamstring injury that has bothered him throughout training camp, Hayward will likely spend some time starting on the outside. But no matter how much he excels there, he has earned a rare distinction in Capers’s defense, one held by a long line of Woodsons: He’s an inside man.