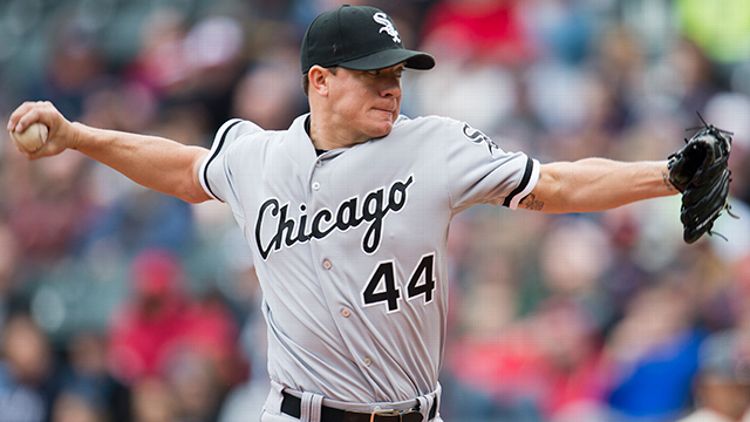 The Red Sox, Tigers, and White Sox pulled off a three-team trade Tuesday night, one that strengthens a diminished Boston rotation, gives Detroit some Biogenesis insurance, and upgrades a thin Chicago farm system.

Given all the angles involved here, let’s break ’em down one at a time:

What started as a seemingly minor neck injury for Clay Buchholz has become a case of shoulder inflammation serious enough to knock the right-hander out for nearly two months, with a return not expected for at least a couple more weeks, and no set estimate for his return other than sometime before season’s end (supposedly). This was a huge loss given how well Buchholz was pitching until hitting the DL: a 1.71 ERA and 2.46 FIP, with a strikeout rate around 25 percent that matches a career high and an average of seven innings per start. Even without throwing a pitch since June 8, Buchholz still leads all Boston pitchers in Wins Above Replacement.

Peavy shouldn’t be expected to produce at that level. Though he owns a sparkling 4½-to-1 strikeout-to-walk rate this year, he has struggled at times with command, leaving balls elevated and giving up a career-high 1.6 homers per nine innings. Some of that might be a function of a relatively small 80-inning sample size and simple random variance. But with the Green Monster beckoning opposing hitters, Peavy will need to hope that his career-high 47.1 percent fly ball rate doesn’t work against him at Fenway. None of that touches the biggest concern with Peavy — his health. He has hit the disabled list at least once in five of the past six seasons, including a month and a half on the shelf this year. He struggled a bit in his two starts back, too, striking out 10 batters against two walks in 13 innings against able opponents in Atlanta and Detroit, but also yielding four home runs.

The good news is that Peavy doesn’t have to be Buchholz’s equal. Felix Doubront has emerged as one of the best young left-handers in the game and that rarest of breeds: a quiet Red Sox breakout. John Lackey has scuffled a bit in his past two starts, but his peripherals this year remain strong, as does his overall body of work. Granted, Jon Lester has disappointed after a torrid start and Ryan Dempster is a back-end starter at this point. But those four incumbents, combined with a healthy Peavy, provide the Sox with enough rotation support to complement a loaded lineup and improve Boston’s chances to win the AL East — even more so if Buchholz can return to health and top form between now and Labor Day.

That Peavy also offers another year of team control (at $14.5 million) only sweetens the deal, setting him up to be part of next year’s rotation or valuable trade bait this offseason, given the depth of Boston’s future rotation assuming everyone’s healthy and their multiple near-ready prospects are good to go next year. Finally, Boston can now shift Brandon Workman to relief, a welcome move that could provide much-needed depth for a group that lost three key arms — Joel Hanrahan, Andrew Bailey, and Andrew Miller — to season-ending injuries.

Detroit’s acquisition of Iglesias marks the first case of a team facing a key PED suspension taking action to curb that suspension’s effects.

Officially, teams aren’t supposed to know what’s going on in the ongoing Biogenesis case. But thanks to MLB’s own repeated leaks, we know that Jhonny Peralta is one of the players being investigated, and that a suspension could drop any day now. Assuming Peralta didn’t or couldn’t appeal, that would erase one of the team’s most valuable players — he is hitting .308/.363/.460 and leads all American League shortstops in Wins Above Replacement — for what would likely be the rest of the year.

Though a glance at Iglesias’s numbers would suggest that he could fill the offensive void left behind if Peralta gets popped, a closer look tells us that’s unlikely to happen. Iglesias was an absolutely terrible hitter in the minor leagues, batting .257/.307/.314 in 294 games, walking just 73 times, and smacking just six homers in 1,209 plate appearances. Granted, he’s hitting a robust .330/.376/.409 this year in the big leagues. But for that Iglesias can thank a sky-high .376 batting average on balls in play, fueled in part by an elevated infield-hit rate. Iglesias had actually been BABIPing well over .400 for much of the season, only to get hit hard with the regression hammer during the past few weeks: In his final 21 games with the Red Sox, he hit just .176 with two walks and no extra-base hits.

Tigers GM Dave Dombrowski knows all this, of course — anyone with an Internet connection knows all this. The bet here is that Detroit saw a potential Gold Glove winner in Iglesias; recognized how incredibly tough it is to find a capable everyday major league shortstop; noted that suspension or not, Peralta would be a free agent at the end of next year while Iglesias offered team control through 2018; and pulled the trigger.

Though Iglesias has value, the Red Sox made out well in this trade …

… especially considering what they actually gave up, versus what they might’ve given up under different circumstances. For instance, you could argue that Matt Garza and Peavy are similar commodities, mid-rotation starters on contending teams with some injury concerns, only with Peavy offering an extra year of control. Despite all that, the Rangers paid a significantly higher price than did the Red Sox, at least given industry consensus on the young talent exchanged in the two deals.

Iglesias was considered a questionable prospect coming into this year given his offensive shortcomings. As for the younger prospects involved, Montas has reached triple digits with his fastball, but both he and Wendelken are widely considered to be future big league relievers at best. And while Rondon, too, is just in Class A right now, scouts believe he might max out as a utilityman, rather than a starting middle infielder in the majors.

So the White Sox will have to hope that the near major league–ready Garcia can build on the .374/.410/.537 line he’s put up this year at Triple-A, that said line isn’t a small-sample fluke driven almost entirely by an unsustainable .467 BABIP, and that he’ll develop a better eye than the one he’s shown when he’s striking out more than four times for every one walk. Because when it comes to what Boston sent to the South Side, there doesn’t appear to be a lot there.

The last remaining question is what the Sox intend to do with Iglesias’s vacated lineup spot.

Red Sox GM Ben Cherington said the team is likely done dealing, meaning the rumors of landing Phillies third baseman Michael Young don’t figure to come to fruition. So what to do at third base for the rest of the season? Boston called Brock Holt up on Wednesday, but we could still see last year’s starter, Will Middlebrooks, brought back up to test his high-power, iffy-eye skill set again in the big leagues.

But really, you have to wonder how the long the Red Sox can resist the temptation to call up Xander Bogaerts. The organization’s top prospect, Bogaerts hit .311/.407/.502 in 56 games at Double-A this year before earning a call-up to Triple-A Pawtucket. He’s excelled there, too, batting .273/.381/.473. Though only 20 years old, Bogaerts has shown an advanced approach at every level, with good pop and capable defense. He’s been projected by pretty much every prospect expert as a future star, and there’s certainly a need now, with Boston in the midst of a fierce pennant race. There are potential drawbacks to a promotion, ranging from the relatively inexperienced Bogaerts getting overmatched by major league–caliber breaking pitches (a legitimate concern) to Bogaerts being a shortstop and thus theoretically blocked by Stephen Drew (a minor concern — sliding Drew to third wouldn’t seem to be a problem) to starting Bogaerts’s service-time clock (a very minor concern, given the team’s immense riches allowed for a $159 million Opening Day payroll, the acquisition of a $14.5 million-a-year starter without a second thought, and certainly enough money to lock up Bogaerts for as long as they want once he stops being cheap).

Though every prospect is different, the Sox could feel emboldened by the success the Orioles had calling up their own 20-year-old phenom infielder last August. Manny Machado’s development since then, to say nothing of what Mike Trout and Bryce Harper have done at similar ages, is reassuring. On pure talent, Bogaerts is the obvious choice. And given the stiff competition Tampa Bay figures to offer for the rest of this year, taking half-measures would seem a weak way to do business.

We don’t have a crystal ball. But it’d be tough to imagine Boston doing something else. Bogaerts is the right choice, and he’s the one the Red Sox should make.