The ACC’s No Good, Very Bad Week, and Why It Doesn’t Matter 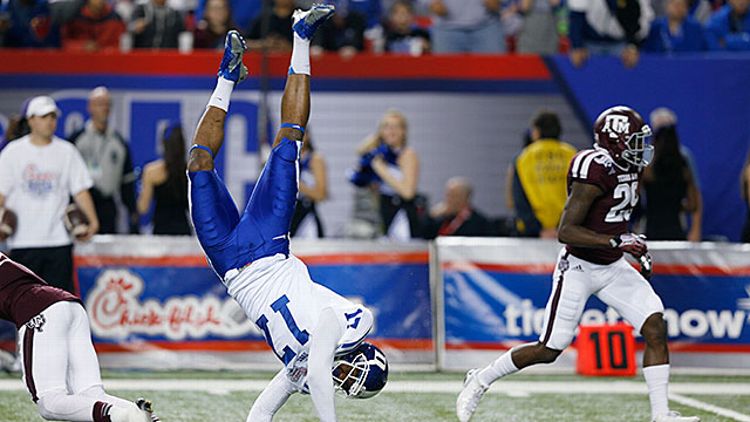 On the morning of December 31, 2013, Florida State was an 8.5-point favorite in the BCS Championship and Clemson stood as a three-point underdog against Ohio State in the Orange Bowl. As the calendar year flipped, neither of the spreads moved. And why should they? There were certainly ways each spread could’ve endured an “Aaron Rodgers returns for Week 17!”–style seismic shift, but if there was any movement it would have to be down to guilt by association. No conference in the annals of bowl history had a worse day than the ACC did on December 31, 2013. Not only did it put up an 0-4 record, but the teams involved all managed to lose in dispiriting, “pass out by 9 p.m” ways:

• Despite having a typically stout defense (ranked fourth in the nation), Virginia Tech’s offense once again appeared more like a convoluted pyramid scheme to rob Logan Thomas of the NFL millions he once appeared destined to make. The Hokies kept things close against 17th-ranked UCLA in the Sun Bowl before somehow getting outscored 28-2 in the fourth quarter, on their way to a 42-12 loss.

• Rich Rodriguez established Arizona as a Pac-12 dark horse in 2014 by destroying Boston College in the AdvoCare V100 Bowl 42-19. And it wasn’t even that close — the Eagles scored 13 unanswered points to end the game, including a pity touchdown for Andre Williams, who reaffirmed his “what is he doing here?” Heisman finalist nomination by compiling a Trent Richardson–esque 75 yards on 26 carries.

• And then there’s Duke. Perhaps it’s uncouth to use a gambling metaphor in regard to a game involving Johnny Manziel, but the Blue Devils somehow got soaked even while they were playing with house money. I guess the fact that Duke managed to build a tremendous lead against Texas A&M was all the validation they needed after appearing way out of their depth in the ACC Championship. And there’s no shame in being a willing accomplice to Johnny Football’s last hurrah. The bigger shame isn’t that they let Texas A&M drop 52 on them, it’s that Anthony Boone & Co. somehow stopped scoring on the Aggie defense.

If there was ever a time for the ACC’s notoriously laconic fan bases to fret about The Future, it should be now. Sure, Florida State might be Alabama with an easier conference schedule for the foreseeable future, but beyond that? Clemson loses Tajh Boyd and Sammy Watkins, and oh, they still lost their two marquee matchups. North Carolina and Miami have potential, but still seem afflicted with sanction shell shock. Georgia Tech has run its course as a contender and Virginia Tech no longer looms large. Maybe Duke got lucky a little too often, Louisville isn’t bringing back Teddy Bridgewater, and they might not have Charlie Strong, either. In this line of reasoning, Shane Ryan is correct: Nothing that Florida State or Clemson do will change the conference’s inferiority complex.

Not that this makes the ACC’s outlook any less grim going into 2014, but leave December 31, 2013, out of it: If you’re going to use bowl season as a means of proving anything about where the ACC stands next year, you might as well gauge your upcoming fantasy draft on what happens at the Pro Bowl. What Bill Barnwell said about the NFL is more true in the college game: Momentum is a sham, and trying to apply it to bowl season is even more pointless.

These games happen nearly a month after the regular season ends, and most speculators will try to gauge the effect of winning or losing now on a season that won’t start for another nine months, often with entirely different rosters and coaches. The things that make college football’s regular season the most thrilling in all of sports — the rivalries, the week-in, week-out stakes — are completely absent; they’re more like your last semester of finals in high school after you’ve already been accepted into college. Sure, the teams get an additional month of practice, but also a an additional month to use your hotel balcony as an outhouse. In the days leading up to the actual game, the players are treated to buffets and tote bags full of swaggy baubles, and may be asked to perform skits or dance routines; in other words, how can anyone expect Boston College, Virginia Tech, or anyone to bring their A-effort when a bowl is more or less a football game tagged onto a week’s worth of bar mitzvahs?

So why not treat it like most people treat their New Year’s Eve a day later — basically a 24-hour freebie that somehow exists isolated in time, a day that says nothing about the past or future, on which you can indulge in your worst character defects and rise in the morning knowing you’ve got nowhere to go but up. In other words, sort of like The Purge, except with more Goldschläger and more actual purging.