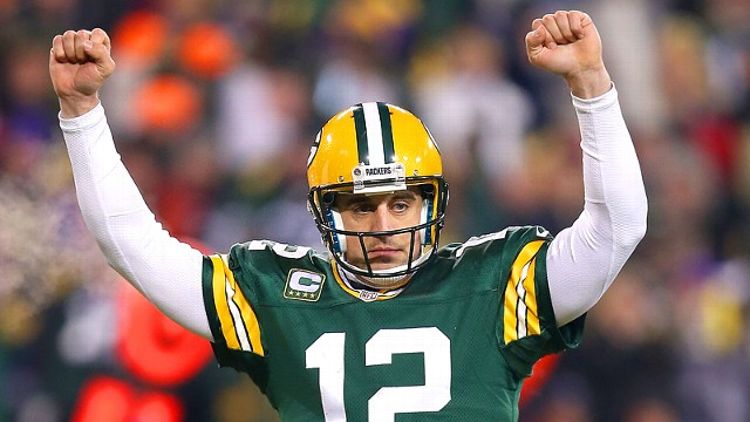 This Saturday night, I plan on sitting in front of my television set for three-plus hours and praying that the Packers’ pass protection is better than the 49ers’ pass rush. Of all the variables that might possibly affect the outcome of the Packers-49ers playoff game, this by far seems the most important. And I’m sure that the pregame coverage, as well as the play-by-play announcers, will spend a lot of time analyzing it. But I also expect to hear about another story line that’s become standard for Packers games. It stars Aaron Rodgers, and it co-stars The Chip On Aaron Rodgers’s Shoulder.

If you watch the Packers every week like I do, you’ve come to regard The Chip On Aaron Rodgers’s Shoulder as an overly familiar chestnut of wisdom utilized by analysts to supposedly reveal deep truths about the reigning NFL MVP’s psyche. It is now officially the no. 1 talking point among football pundits for deconstructing Aaron Rodgers’s play and persona. What “he looks like a kid out there!” was to Brett Favre, “he sure takes things to heart!” is to Rodgers. If Favre was “the gunslinger,” Rodgers is the grudge-slinger.

The Chip On Aaron Rodgers’s Shoulder had its coming-out party on 60 Minutes in November, which documented how Rodgers “built his career on the doubts of others” after he failed to initially secure a scholarship from a Division I (or II or III) school, and then slipped to no. 24 in the 2005 draft in spite of a record-setting career at Cal. Reporter Scott Pelley dutifully covered all of the bases in the telling of The Chip On Aaron Rodgers’s Shoulder’s origin story: the lack of big-time college offers, the patronizing coach from Purdue who wished Rodgers “good luck with your attempt at a college football career,” the televised draft-day humiliation, the years spent riding the bench behind Favre, the cursing youngsters who screamed for Brett once Rodgers finally got the job, the critics who doubted him earlier this season.

Pelley also sowed the seeds for future consternation from The Chip On Aaron Rodgers’s Shoulder by allowing teammates Greg Jennings and Clay Matthews to razz Rodgers about his thin skin on national television. “Once he sees this interview he’s gonna be sensitive to the fact that we’re saying he’s sensitive,” Jennings said with a not-sorry smirk. Sure enough, Rodgers complained publicly about how the piece was edited; a 60 Minutes producer later called him out for being (you guessed it) sensitive.

It wasn’t always like this. When Rodgers weathered the post-Brett non-retirement retirement storm in Green Bay back in 2008, it was his quiet confidence and quick-witted intelligence on the field that distinguished him. He seemed like a quarterback in the Tom Brady mold — cool, relaxed, always in control. Rodgers is those things, but he doesn’t have the glamour-boy aloofness off the field that Brady has. Instead, he has come to be defined by his seemingly endless supply of resentments. It’s even there in those inescapable “Discount Double Check” commercials — in the first ad in the series, Rodgers is flummoxed because nobody recognizes him as an NFL quarterback. In another ad, his touchdown celebration is usurped by teammate B.J. Raji. In the latest run of commercials, Rodgers practically pleads with a roomful of grade-school kids that he’s the MVP of the league. (All they care about is insurance.)

Compare that to how dashing Brady always looks in his commercials. Or the harmlessly goofy passive-aggression displayed by Peyton Manning in his ads. Or the charming country-boy act of Brett Favre when he’s hawking blue jeans. Those guys are as locked into their “characters” as Rodgers is into his, for better or worse.

The good news for Packers fans is that The Chip On Aaron Rodgers’s Shoulder — if it truly exists outside of the convenient media-driven narrative — appears to be very good for the Pack, and there is plenty to keep it perched in the weeks ahead. The 49ers game is a chance to beat the team that drafted Alex Smith ahead of him back in ’05. (Rodgers called this shot on draft day, by the way.) If the Packers beat the 49ers and play the Seahawks in the NFC Championship — assuming the Falcons lie down like the world expects them to — it will be Rodgers’s chance to avenge one of the biggest frauds in the history of the NFL. In the Super Bowl, on the likely chance the Packers would play the Broncos or the Patriots, Rodgers would be motivated to slay one of the two elder field generals presently standing in the way of total NFL quarterback domination.

Or … the Packers could lose on Saturday, which would inevitably prompt some knucklehead to question Rodgers’s ability to perform in the clutch, and we’ll have tons of spite-fueled brilliance to look forward to next season.

Taking a longer view, I wonder how The Chip On Aaron Rodgers’s Shoulder will evolve once Rodgers assumes the “face of the league” status he’s being groomed for once Brady and Manning finally retire. I won’t say Rodgers came off as unlikable on 60 Minutes, but he’s pricklier than the public allows NFL superstars to be. As the narrative around Rodgers hardens, he might become the undisputed great player that people outside of Wisconsin have trouble loving. Of course, I live inside Wisconsin, so this hardly matters to me. Here’s what does worry me: When Rodgers finally runs out of ways to plausibly construct a bubble of doubt around him, what then?