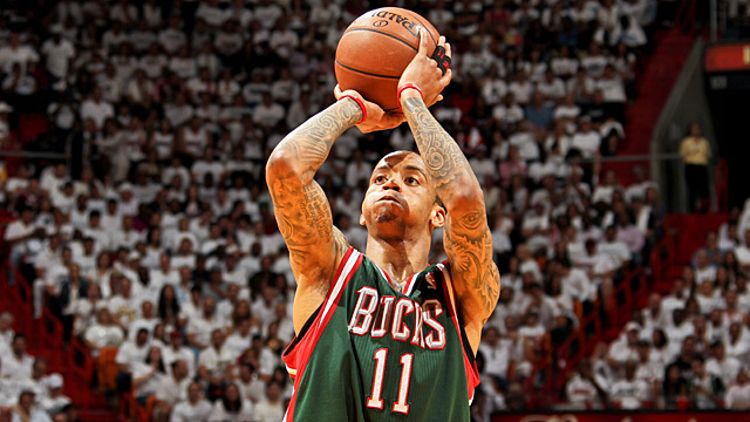 Every player possesses individual strengths and weaknesses, and every player casts up a unique set of field goal attempts. Some players get lots of shots in areas where they excel, and others experience the opposite — they take lots of shots in places where they are below-average NBA shooters. Here’s a look at the players that had the least efficient shooting performances by zone in 2012-13. 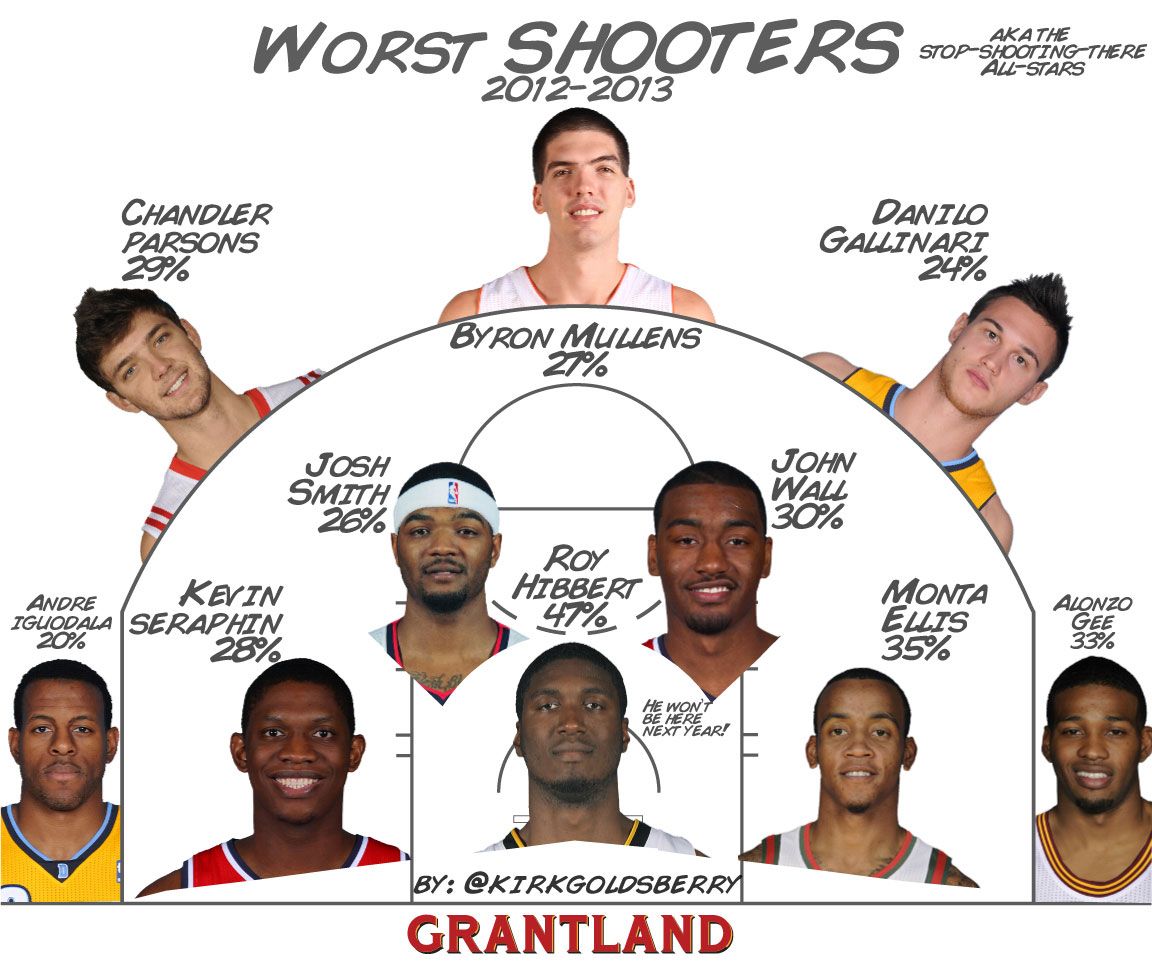 It makes me sad that Roy Hibbert is on this chart; he was not himself at the beginning of the year. He had a bum wrist, and it greatly affected his shooting. The proof is in his monthly splits — he was a very different player early in the season than he was late. Back in November and December, it was so bad that Pacers fans were concerned that their max-contract center was a bust. That seems crazy now; by the end of the season, Hibbert had regained his form and the Pacers nearly made the NBA Finals. Still, Hibbert’s first half was so bad that despite huge improvements toward the end of the season, he remained the least efficient shooter in the league close to the basket. I doubt he’ll ever be on this chart again.

The midrange jumper is said to be the “worst shot on the floor” — for some guys it’s even worse than that. Kevin Seraphin, Josh Smith, John Wall, and Monta Ellis are among the players who cast up a ton of midrange shots but probably shouldn’t. The good news for Wizards fans is that Seraphin is actually a very good midrange shooter from his left, and Wall has made great strides; he’s developing a sweet spot near the right elbow. Smith and Ellis, however, continue to infuriate fans around the league. Both guys have tremendous talent, but both remain atrocious, unimproved, and voluminous jump shooters.

It’s tough to say which guy is more frustrating. Ellis is a better shooter than Smith, but Smith is a dominant player close to the basket. Only 13 players in the NBA shot more than 500 midrange shots in 2012-13, but of these guys only Ellis shot below 37 percent. For context, the only other players under 40 percent were Carlos Boozer, DeMar DeRozan, and Russell Westbrook. I think it’s fair to say that Ellis is the least efficient volume shooter in the NBA. As a result, I view Ellis’s potential contract as a referendum on the state of analytics in the NBA.

I don’t know how much bricks cost in your neighborhood, but apparently Monta believes they’re worth more than $11 million per season. So far, it’s looking really bad for Monta’s valuation of masonry.

Andre Iguodala is a great basketball player, but he should probably not be in the corners too often. Iggy made 11 of 56 shots from the left corner last season in Denver. Given the personnel on his new team in Golden State, I doubt he’ll shoot that many corner 3s going forward. He’s an acceptable shooter from above the break. 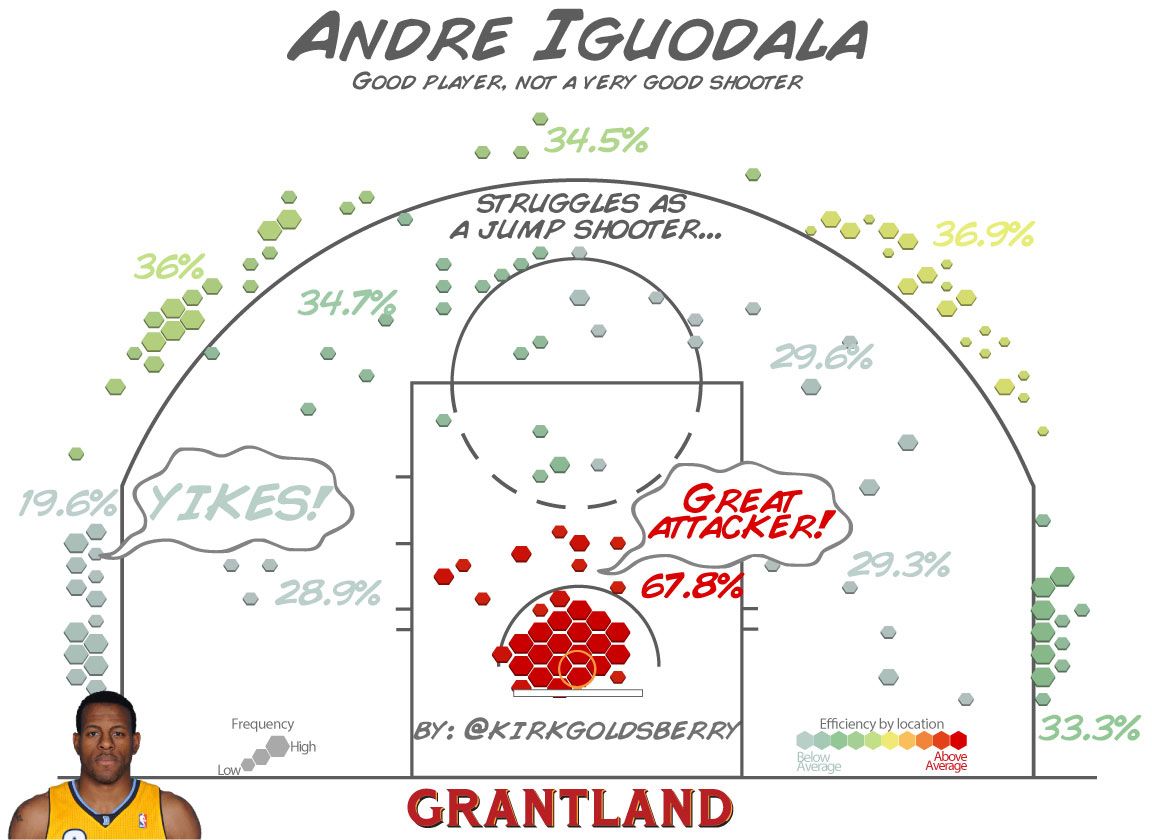 Speaking of above the break, Chandler Parsons went 35-for-121 (29 percent) along the right wing. That’s not very good. This was by far Parsons’s most frequent shooting location beyond the arc, but it was also his least efficient. He performed much better at the top of the arc, where he shot 44 percent, and in the corners (just under 50 percent). The Rockets should consider adjusting where they get him looks; as a 3-point shooter his opportunities and his talents are not currently aligned. 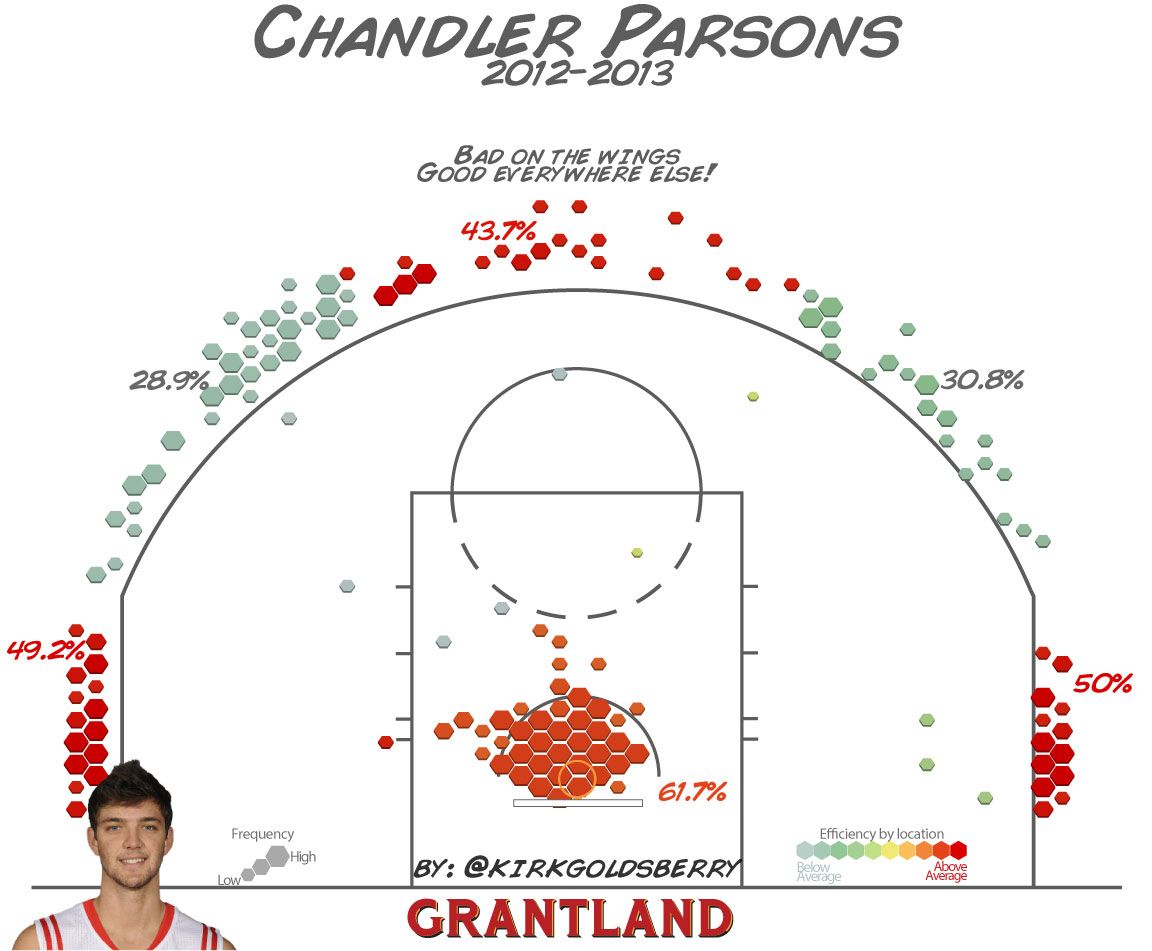 Parsons’s teammate on the Vidal Sassoon All-Stars, Danilo Gallinari, has a similar problem. Gallinari has emerged as a very good shooter, but his most frequent 3-point shooting location is also his least efficient. In his case, it’s along the left wing, where he made only 26 of his 108 attempts in 2012-13. He’s very good everywhere else, but unfortunately for Nuggets fans he got most of his chances where’s he’s at his worst. 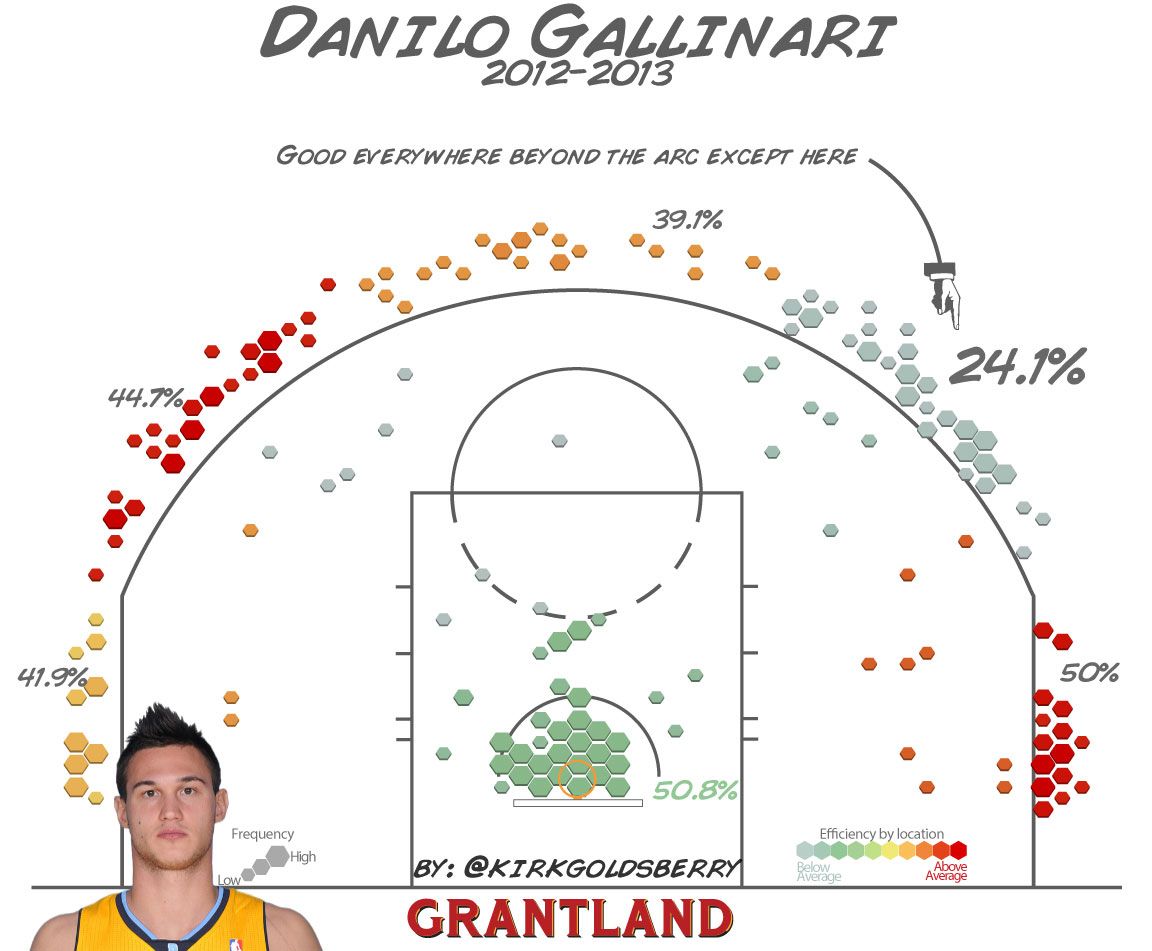