That Escalated Quickly: Your Guide to Toronto and Buffalo's Crazy NHL Preseason Brawl 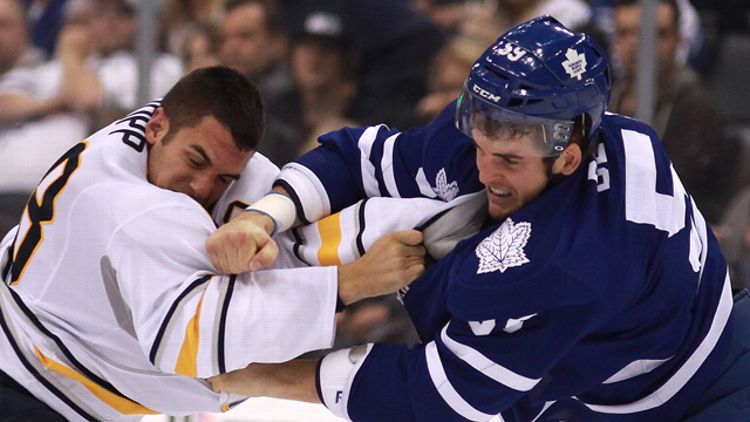 Last night, television sets across the continent were tuned in to a depraved world of unimaginable violence, horrifying bloodshed, and an almost total absence of morality on the part of everyone involved.

Or, if you wanted something a little less intense, you switched away from the Toronto-Buffalo preseason game and watched Breaking Bad instead.

Yes, the Maple Leafs and Sabres got a little bit rowdy on Sunday. The game was the second half of a home-and-home that hadn’t actually featured all that much bad blood. Sure, there had been a few scraps, because this is the preseason and it’s practically mandatory that every game feature several meaningless fights between guys who are about to be cut. But the overall mood had been almost chipper, even including some comic relief in the form of a novelty shootout attempt by Paul Ranger during Saturday night’s game.

That all changed quickly midway through the third period on Sunday. Sabres forward Corey Tropp scored a goal, then fought Leafs tough guy Jamie Devane on the ensuing faceoff. Tropp was a willing participant with some fighting experience but was badly outmatched here against a much bigger opponent, and it showed.

That set the stage for one of the wildest — and most bizarre — line brawls in recent memory.

Let’s run through some of the highlights.

Scott could be described as a traditional NHL enforcer, which is a nice way of saying that punching guys in the face is pretty much his only hockey-related skill. He’s also massive — at 6-foot-8 and 270 pounds, he’s the biggest player in the league. Let’s just say that when the Sabres sent him out for the shift immediately after Tropp’s loss, it wasn’t to establish a forecheck.

But Scott has a problem. The code says that enforcers are only supposed to fight other enforcers, and the Leafs didn’t make any available. Instead, coach Randy Carlyle had sent out a line of skill players. It’s possible he thought he was taking the high road and defusing a potentially ugly situation, but given that the Leafs usually dress two enforcers of their own and led the league in fights by a wide margin last year, it’s more accurate to say he just didn’t have anyone else available.

So Scott finds himself lined up next to Phil Kessel, a star player who doesn’t fight and has never intimidated anyone unless you count posing for photos like this. Surely Scott wouldn’t go after adorable, harmless little Kessel, would he?

The camera catches Scott and Kessel having a pre-faceoff conversation, during which Kessel claims that Scott said he was going to “jump” him. As soon as the puck drops, Scott sheds his gloves and goes after Kessel, who responds pretty much the way I would if a guy who outweighed me by 100 pounds was trying to put his fist through my face. [Double-checks tape.] Wait, no, it turns out he didn’t curl up in a little ball and soil himself. My mistake.

Instead, Kessel opts for the next best option and hacks away at Scott’s ankles while retreating. That earns him a match penalty, but also buys him just enough time for the cavalry to arrive. Kind of.

Remember, none of the Leafs on the ice have much experience with fighting. But they’re all smart enough to realize that if they let Scott have his way with their best player, Carlyle will be waiting to cut them as soon as they get back to the bench. (Not cut them from the roster. Cut them with a knife.)

So they charge at him as a group, and it briefly looks like Scott is about to get a chance to answer that age-old Internet question, “How many 5-year-olds could you take in a fight?” But wait! Reinforcements are on the way, because …

David Clarkson jumps off the bench

Upon seeing a goon targeting his team’s best player, Leafs forward (and reasonably accomplished fighter) David Clarkson makes the decision to leave the bench and intervene.

This isn’t an easy call, because leaving the bench to fight is one of the few infractions in the NHL that has a heavy suspension attached to it. It’s an automatic 10 games (as Paul Bissonnette found out last week), and there’s little hope of winning an appeal. That’s an enormous price to pay for a player like Clarkson, the Leafs’ prize free-agent signing and a key part of their playoff hopes.

But still, Kessel is in trouble. Clarkson makes up his mind. He leaps over the boards. He makes a beeline for Scott. And then …

College Football, Week 4: Ring the Bells That Can Still Ring