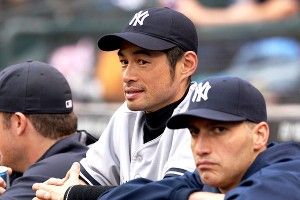 After 11 years in Seattle, Ichiro Suzuki’s Mariners career came to an end Monday, when he was traded to the Yankees for minor leaguers D.J. Mitchell and Danny Farquhar, plus cash. Here are 10 things you need to know about one of baseball’s most iconic players, and the deal that brought him to New York.

1. This is not the Old Ichiro. More like old Ichiro.

Since the start of the 2011 season, Ichiro is hitting just .268/.302/.342. As ace ESPN play-by-play man Boog Sciambi notes, that’s 236th out of 255 players with a minimum of 500 plate appearances during that span. If we isolate this season, Ichiro’s .642 OPS heading into Monday night’s game ranked second-worst among all outfielders with 250-plus plate appearances (only Coco Crisp has been worse). This isn’t the guy who banged out .300, even .350 seasons with ease. Not even close.

2. For the Yankees’ purposes, this doesn’t matter all that much.

All New York needed was an upgrade over what they had. With Brett Gardner out for the season, and Nick Swisher now nursing an injury of his own, the outfield depth chart was getting ugly, with Dewayne Wise and Jayson Nix poised to get more playing time than they should. Even once Swisher came back, Raul Ibanez was an inadequate option as the lefty-swinging half of a left-field platoon. As I wrote in Monday’s Week 16 edition of The 30:

Their Oakland nightmare notwithstanding, the Yankees are probably going to coast to their third AL East title in four years even if they run out Clay Bellinger every day in left field. But here’s the thing: Over the past month, the guy playing left field against right-handers could only wish to be as productive as Clay Bellinger. On May 21, Raul Ibanez was hitting .273/.336/.582, providing a huge power boost to an already potent lineup. Since then: .271/.271/.349, with the usual abysmal defense you’d expect from someone who was already a human GIF machine years ago, and is now past his 40th birthday. With Brett Gardner likely out for the year, Nick Swisher battling a quad/hip flexor injury, and the Ibanez-as-killer-cheap-signing meme dead now that Raul’s just a tick above replacement level for the season, the Yankees are rumored to be kicking the tires on multiple outfield options. Given that the Yankees have aspirations beyond another division title, you can’t blame them.

All the Yankees needed was a poor man’s Brett Gardner — someone who’d help defensively, run the bases well, and produce enough hits against righties to justify the at-bats. Ichiro can do that, especially with Andruw Jones taking the at-bats against lefties. Acquiring someone like Justin Upton, Shane Victorino, or Denard Span might’ve been better, but it also would’ve cost the Yankees more, and that’s assuming Arizona or Philly would’ve gone through with a trade. Ichiro cost next to nothing: a 25-year-old righty with lukewarm minor league numbers in Mitchell, and another 25-year-old minor league pitcher who’d been designated for assignment twice this season.

As the smart cookies at The Fielding Bible tell us, Ichiro’s 12 Defensive Runs Saved this season trailed only Josh Reddick’s 13 among all major league outfielders.

4. The Yankees even got cash back in the deal.

They’ll pay just $2.25 million of the nearly $6 million Ichiro was owed for the rest of this season. If you’re a Yankees fan jonesing for a bit of schadenfreude, please enjoy the Twitter feed of @KenTremendous, a die-hard Red Sox fan and Grantland contributor (and Parks and Rec showrunner) who’s more than a little bitter that Brian Cashman convinced the Mariners to send money to the poor, downtrodden Yankees.

5. The Mariners made out well, too.

The trade itself doesn’t figure to produce much value. But the Mariners were in a tough spot with Ichiro politically. His contract was due to expire at season’s end, the team’s owners seemed committed to re-signing Ichiro when his best days were long behind him, and younger players needed playing time on a rebuilding team. That political hot potato now becomes moot, and Casper Wells and Carlos Peguero should both see regular playing time with Ichiro gone. It was indeed in everyone’s best interests for Ichiro to get traded, including the man himself, who’d requested a trade a couple weeks ago.

6. That Ichiro got dealt to New York right as the Yankees got to Seattle for a three-game series made for a great scene.

First at-bat, Ichiro strides to the plate. Standing ovation from half-full Safeco Field. Ichiro doffs his cap, bows to the fans. He promptly smacks a line-drive single to center, then steals second, all while being serenaded with chants of I-CHI-RO! It was all a little surreal, but still pretty cool.

• The first walk-off homer of his career came three years ago, against Mariano Rivera and the Yankees. Fast-forward to the 1:45 mark, then stay tuned for his goofy pre-dog-pile celebration.

• Or enjoy Ichiro high-fiving the Ichimeter lady in the bleachers.

• Or better yet, enjoy the famous Ichiro laser beam clip, which is basically the reason YouTube was invented.

Read Shannon Drayer’s recounting of the Ichiro era, and her experiences covering one of the quirkiest players the game has seen in years.

Once in San Diego I walked into a coffee shop to get a latte and there he was, just two people in front of me. This was years before he got into some of the wilder fashions we have more recently been accustomed to seeing him wear. Back in those days you might see him in jeans and a T-shirt and sometimes with a backpack, looking more like a college kid than an international superstar.

In this latte line I was faced with a dilemma. I should say hello, right? It would be rude not to. The problem was, if I said, “Hi Ichiro!” his anonymity would be blown. Everyone in the place would know who he was.

I smiled at him and muttered something as he passed by. Later in the clubhouse I approached him and told him of the problem. I told him I didn’t know how to address him in public as not to draw attention to him.

Then read this tribute post by Lookout Landing’s Jeff Sullivan.

There’s never been a thing like Ichiro, there’ll never be another, and we were the lucky ones blessed. In so many ways, we haven’t been blessed at all, but in this way and few others, we’ve been fortunate. Recognize how fortunate.

10. Ichiro is a human quote machine.

• Asked once how he handled the inevitable rough patches, Ichiro replied: “When I’m in a slump, I ask myself for advice.”

• During one round of contract negotiations, Ichiro was asked who advised him on his decision. His reply: “Ikky, my dog. He said, ‘Ruff, ruff, ruff.’ That means, ‘Stay, stay, stay.'”

• Finally, when asked his thoughts leading up to a possible trade, he said: “When I imagined taking off a Mariners uniform, I was overcome with sadness.”

It’s a different uniform, but you’re still here, Ichiro. And I’m still rooting for you.