Ten Great Moments From the NHL’s Least-Loved Playoff Round 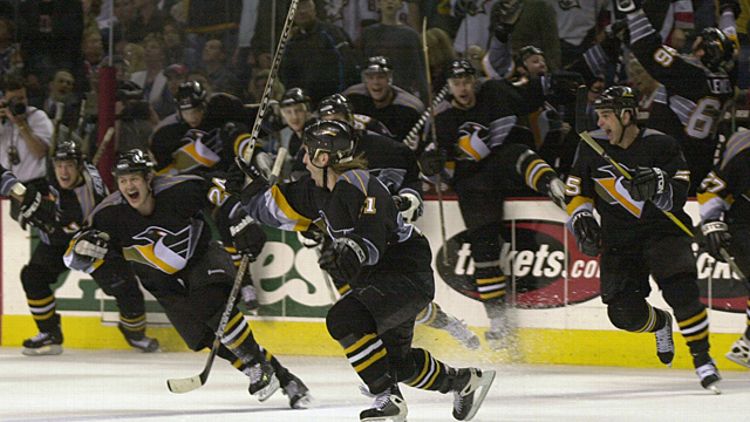 Hockey fans have an uneasy relationship with the second round of the NHL playoffs. Don’t get us wrong. We like it. It’s fun. No complaints. It’s just that … well, if we have to be honest, it’s probably the postseason’s least interesting round.

We can all agree that the first round is pretty much the greatest thing ever. With eight series going on at the same time, there’s always a game on. The action is unbelievably intense, every other game goes into overtime, and the matchups feature a nice mix of powerhouse favorites and plucky underdogs.

By the time the third round rolls around, every game is crucial and every remaining team is a legitimate Cup contender. And most years, the finals are packed with enough tension and drama to make up for the fact that the league schedules each game nine days apart to make sure there’s never any momentum.

But Round 2 is just kind of … there. There are still a lot of games, but after Round 1 it feels like it’s not enough. There are always a few underdog teams who have almost worn out their welcome. And injuries are starting to tilt a few of the series in unfortunate ways (as opposed to the later rounds, when everyone is hurt so it doesn’t matter).

It wasn’t always like this. Prior to 1994, the second round was actually the divisional final, which meant guaranteed intensity and gave us clutch goal scorers like Doug Gilmour, Peter Stastny, and Steve Smith. But since the league ditched its divisional playoff format, Round 2 has become the NHL playoffs’ unloved middle child.

It doesn’t have to be that way. We can learn to love the second round. To help, here’s a look back through 10 great second-round moments since the NHL moved to a conference-based system:

I’ve covered this one before, so I’ll just reiterate that this double-overtime Game 7 winner is one of the greatest goals I’ve ever seen:

At first glance, this looks like a case of Blues goalie Jon Casey giving up a terrible goal. It’s a slap shot from the blue line, after all, and Casey barely waves at it. But then you watch the replay and realize that, in addition to Casey being partially screened, Yzerman puts the puck in the absolute exact spot it needs to go. And he hammers it. In that last replay, everything is moving in super-slow motion while the puck somehow still seems to be going at regular speed.

Let’s be honest, it wouldn’t be hard to fill this post entirely with a list of big goals and be done with it. But we need to work in at least a little bit of variety. So how about a goal celebration? No, wait, that’s not quite accurate, let’s try again: How about a mock goal celebration that doubles as a not-so-subtle “screw you” to one of the game’s greatest players?

The Leafs and Penguins met in 1999 in what could be described as a classic second-round matchup, in the sense that it featured two quasi-underdog teams with no history or especially interesting backstory. The series itself wasn’t all that memorable until the very last moment, when noted sniper Garry Valk ended it in overtime with his patented “wait for a defenseman to kick his own goalie in the crotch and then shoot the puck into the empty net” move.

This was back in the day when Jaromir Jagr was celebrating goals with his glove-off military salute. The move showed evidence of some actual personality, so it goes without saying that the hockey world hated it. That apparently included Leafs defenseman Danny Markov (no. 55), who took a break from the post-series celebration to fire off a few salutes of his own in the Penguin star’s direction, eventually ignoring his celebrating teammates altogether to make sure Jagr saw him.

Side note: The 1999 Maple Leafs went on an unexpected run all the way to the conference finals, but 100 percent of Toronto fans agree that this was the highlight of the season. Not Valk’s goal — the Markov salute.

The Penguins and Flyers had been having a decent-enough series when Game 4 unexpectedly turned into an endurance contest for the ages. The goaltending duel between (of all people) Ron Tugnutt and Brian Boucher would drag on for more than 150 minutes and lead to the third-longest game in NHL history (and the longest since the 1930s).

And then, finally, we got this somewhat anticlimactic winner from Keith Primeau.

I think the most remarkable thing about this clip is the announcer’s level of enthusiasm. We’re eight periods into this one, and he still manages to give the goal an over-the-top reaction. That’s impressive stamina. Considering that even a simple quadruple-OT game has been known to drive broadcasters insane, we have to give him credit. And the “Thank goodness it’s over” is a nice touch.

Playoff overtime has a habit of ending in the way you’d least expect, and it’s hard to come up with a more unexpected ending than arguably the greatest goalie of all time being beaten on a defensive defenseman’s unscreened wrist shot. So of course that’s how Game 7 of the 2001 series between the Sabres and Penguins finished.

I love just about everything about this clip, from Mike Lange’s call to Dominik Hasek executing a classic “OT-losing goalie sprinting off the ice” move, but I think we can all agree that the Penguins’ celebration is the highlight here. Kasparaitis decides to go with the long-distance belly slide, which is followed by a teammate jumping on his back, which is followed by yet another teammate jumping on the first teammate’s back. I was kind of hoping they’d keep going until it was just a perfectly balanced 20-player stack sliding into the end boards, but no such luck.

The Leafs and Senators met in the playoffs four times in five years from 2000 to 2004, but this was the only second-round series matchup. And while this one did go the full seven games, the most memorable moment came with the score tied in the dying minutes of Game 5.

This may seem like a missed call, but you have to remember a few things. Daniel Alfredsson had a reputation as a squeaky-clean player (this was before the Niedermayer thing). Darcy Tucker, um, did not. And these were the final minutes of regulation in a tied playoff game, so there wasn’t going to be a penalty called unless somebody died. Which, based on Tucker’s reaction, might actually have been what happened.

The goal stood up as the winner, giving the Senators a 3-2 lead in the series and a chance to close things out at home. Because this is the Leafs and Senators in the playoffs, you can probably guess how that all turned out.

Just a few years after the Flyers and Penguins had played the first quintuple-overtime game in more than six decades, the Stars and Ducks duplicated the feat in Game 1 of their series. However, Petr Sykora’s game winner would end up coming a full 12 minutes earlier than Primeau’s. Bunch of quitters.

There’s nothing quite like the silence that immediately follows a home team losing a marathon overtime game. It’s all the shock and disappointment that comes with your garden-variety OT loss, combined with the realization that you have to be at work in seven minutes.

The Flames entered their series with the Presidents’ Trophy–winning Red Wings as heavy underdogs. But they’d pull off the upset thanks to back-to-back 1-0 victories in Games 5 and 6, the latter of which came in overtime.

This was the second straight round and third time in three years that Martin Gelinas had scored a series-winning goal in OT. As every bitter Flames fan remembers, his clutch goal mojo would run out later that year.

8. 2007 — Chris Drury Ruins Everything for the Rangers

The 2007 Sabres were probably the best team in franchise history, recording 113 points and capturing the Presidents’ Trophy. But they were on the verge of falling behind in their series against the sixth-seeded Rangers, trailing Game 5 at home by a 1-0 score with just 15 seconds left. That’s when Chris Drury cemented his reputation as one this generation’s great clutch players.

The goal tied the game, set up the Sabres’ eventual overtime winner, and helped convince the Rangers to give Drury a $35 million contract in the offseason, which they’d end up having to buy out. So all in all, pretty much a total disaster for New York.

As the clip above shows, the Sabres eventually won in overtime. Note how Maxim Afinogenov scores the winner and executes a brief belly slide before immediately popping back up to his feet, presumably after remembering what happened to Darius Kasparaitis.

Also, I love Rick Jeanneret. I just wanted to mention that.

9. 2008 — Seriously, Enough With the Multiple Overtimes

You have to give credit where it’s due: What Round 2 typically lacks in rivalries or excitement or big moments, it more than makes up for in really long games. This time it’s the Stars and Sharks, and they’re nice enough to get this one over with in a relatively brisk four OT periods:

Amazingly, this would be the eighth-longest game in NHL history but only the third-longest the Stars had played in the past few years. (In addition to the Ducks game above, they also went to quadruple overtime against the Canucks in 2007.)

This goal by Brenden Morrow would end not just the game but the series. It was also probably the last legitimate highlight that Dallas Stars fans have had to cheer about. The franchise hasn’t made the playoffs since, no doubt because everyone got sick of them playing marathon overtime games.

You know a Game 7 hasn’t gone well when you can say “I cannot believe we blew that 3-0 lead,” and other fans will ask you to be more specific. Ladies and gentlemen, the 2010 Boston Bruins!

The Bruins’ collapse against the Flyers saw them become only the third team in NHL history to lose a series after winning the first three games. On top of that, they jumped out to a 3-0 lead in Game 7 at home before blowing that, too.

Seriously … blowing a three-goal lead in a Game 7? Who does that? Oh, right. OK, forget I brought it up.

Still, as if all that weren’t painful enough for Bruins fans, the hockey gods had to twist the knife just a little bit more by having the game winner come while Boston was serving a too-many-men penalty. You have to admit that was an inspired touch.