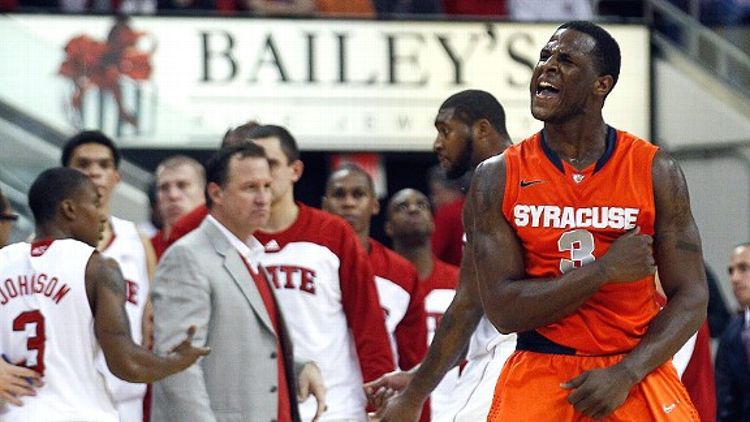 Sports analysts love talking about “distractions.” These intersections between athletics and real life — arrests and contracts, marriages and divorces, births and deaths — offer ready-made narratives that are easy to spout and difficult to deny. In the postgame rundowns, winners are more heroic and losers more forgivable. Write it down now: As Kobe’s mileage continues to catch up with him this season, someone will blame his natural decline on Vanessa’s strip-mining of his fortune.

In college sports, there may never have been a more wrenching distraction than the Jerry Sandusky scandal unfolding in State College, Penn. But Syracuse, the top-ranked basketball program in the country, is also reeling from sexual abuse allegations.

The Orange have gone undefeated since former Syracuse assistant coach Bernie Fine was placed on administrative leave in November. We’re surely supposed to find something meaningful in this. Maybe they are mentally tough. Maybe they are concentrating extra hard on basketball to block out everything else. Maybe they are pulling together. But probably, Syracuse is just a really good basketball team.

After Ohio State and Kentucky fell, the Orange ascended to the top of the NCAA basketball pecking order. It’s a reward — one with all the meaningfulness of a “World’s Greatest Redheaded Stripper” mug — for not shitting the bed. Besides Florida and Stanford, their opposition has mostly been as threatening as the Eastern Monrovia Finishing School for Poets. All of these glorious wins heading into Saturday came at home in the Carrier Dome, with the exception of two games in front of a pro-Syracuse crowd in Madison Square Garden. The Orange have not taken an arduous, thorny path to the pinnacle; they’ve floated up on an air gondola.

Saturday night’s matchup between Syracuse and NC State was billed as one of those classic “trap” games: an arriviste team against an underdog with protruding ribs, in their noisy den. The Wolfpack haven’t been invited to the NCAA tournament since 2006 — so having a nonconference powerhouse treading on their turf was a significant event in Raleigh. And of course, there was the lingering “distraction” of the Fine allegations.

Unsurprisingly, the Wolfpack were gamers. As the crowd bellowed in glee, they raced out to a 12-4 lead. C.J. Williams, a senior who averaged fewer than five points a game his first three years, continued his metamorphosis into a scoring dervish. He feasted on the spongy midsection of Syracuse’s celebrated 2-3 zone, darting into the high post for looks at the basket that were less obstructed by lanky, long-limbed defenders.

When a team dismantles the Syracuse zone for easy dunks or open jumpers, one wonders why such successes aren’t easily duplicated. It looks simple enough: Pop the ball into the foul line area, then pass into the post before the defender pinches down or to the opposite wing for an open 3-point attempt. The problem is that Syracuse’s version is not the passive, lazy creature that every basketball player learns how to carve up in middle school. Syracuse has big guards, mobile forwards, and hulking interior defenders who can alternatively spring traps on the baseline, in the post, and on the wings. Training a dog is different when it weighs 700 pounds and has rabies.

NC State made seven of its first 10 field goal attempts by running its offense with precision, but scoring at a 70 percent clip against Syracuse is not a sustainable business plan. Eventually, the Wolfpack began chucking up contested shots, bobbling passes in the post, and turning the ball over. As their offense imploded, Syracuse’s exploded. Over a six-minute period the Orange went on a 23-0 run. At halftime, they led by 14.

Of the 23 consecutive Syracuse points, only five were netted by their starters. This is not unusual for a team that leads the nation in bench scoring. While the Orange have the swarming depth of a colony of agitated fire ants, this feat is mostly accomplished through coach Jim Boeheim’s screwball substitution patterns. Freshman Rakeem Christmas is a starter by technicality — reprising the role Fab Melo inhabited last season — and has played under five minutes in four of the past seven games. Reserves Dion Waiters and C.J. Fair spend as much time on the court as anyone other than leading scorer Kris Joseph. And experienced guards Scoop Jardine and Brandon Triche often spend long, crucial intervals perched on the pine like gargoyles. Such divisions of labor are testaments to how malleable the Syracuse lineup has already become.

Credit Waiters for much of the team’s positional chaos, as well as its early success. Following a debut campaign that was a wet sack of surliness, erratic shooting, and lazy defense, the sophomore has emerged as the team’s best guard and most dynamic player. Joseph is a polished scorer with an arsenal of perimeter shooting, weaving drives, and deft bank shots, but he often amasses his buckets quietly. Waiters plays with urgency. He mashes down sledgehammer dunks in transition and drains 3-pointers. With broad shoulders, rigid posture, and a knack for muscling off defenders while airborne, he resembles a Canal Street version of LeBron James. Comparing the team’s seventh man to the best player on the planet invites ridicule, but whenever Syracuse has mounted a comeback or turned a nail-biter into a laugher, Waiters has been on the floor.

In the second half, the Wolfpack charged back into contention. With Syracuse enchanted by its newfound perimeter-shooting abilities, NC State gobbled up long rebounds and turned them into easy transition buckets. A weakness of the no. 1 team in the county was revealed. Without a true post presence, the Orange can be convinced to hurl up 3-pointers, which makes it possible to counterattack their zone before its sticky webbing is set up. About five minutes into the period, NC State evened the game up on yet another Williams jumper.

But eventually, Syracuse’s overwhelming talent prevailed. Jardine, who seems dedicated to preserving his reputation as one of college basketball’s most erratic players, scored 14 of his 16 points in the second half. Waiters finished with a career-high 22. Joseph dumped in 21. And, despite the Wolfpack’s spirited efforts, the final score wasn’t even close.

With Syracuse avoiding a pitfall against NC State, it’s tempting to look at its breezy upcoming schedule. The Orange don’t play a ranked opponent until January 7, when Marquette visits the Carrier Dome. Maybe they will make it there unscathed. Maybe they won’t. But if they lose, it won’t be because they’re too distracted to play friggin’ basketball.