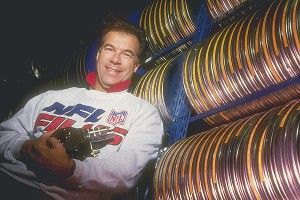 I never met Steve Sabol, but I wish I could have worked for him. His father, Ed, founded NFL Films, but Steve defined what it became: the finest cinematic reflection of a sport in absolute totality, consciously designed to amplify an intellectual viewing experience through emotional means. If that sounds unnecessarily complicated and verbose — fine. It’s still the truth. With the possible exception of Pete Rozelle, no other men influenced the way casual audiences think about football as deeply as Ed and Steve Sabol. And while it was the father who built the foundation, it was the son who erected the superstructure.

Football is the most popular game in America. Logically, that should not be the case. There are so many things working against it: the complexity of the rules. The obscurity of the players’ faces. The violence. The reality that — for most of the afternoon — nothing much happens (within any 60-minute game, there are only 11 minutes of action). And yet the Sabols turned all those problems into strengths. In the same way you don’t need to read the subtitles in order to enjoy Persona, you don’t have to understand the technicalities of football to enjoy NFL Films. Sabol tapped into the most visceral aspects of television — intensity shot in slow motion, uncomfortable close-ups, and wordless music. I’m sure Sabol was sometimes tempted to use rock or hip-hop in his documentaries, but he generally adhered to classical scores (he understood how things would — or would not — improve with age). He cared more about the delivery of language than the specifics of its content. This poem? Steve Sabol wrote this poem. Now, it’s not the best poem ever written. It might not be the 100th-best poem about autumn. But Sabol knew how those words would sound when John Facenda recited them, and he understood the kind of person who would hear them, and he could instantly visualize which images should fall behind them. NFL Films is a rare example of cinematographers placing style over substance and actually making the product infinitely more substantial. Sabol did this effortlessly, for 50 years. It was his natural state of filmmaking. It’s how the 1970s should always look.

Steve Sabol died from brain cancer today. He seemed young for 69. His father remains alive. I feel terrible for him.