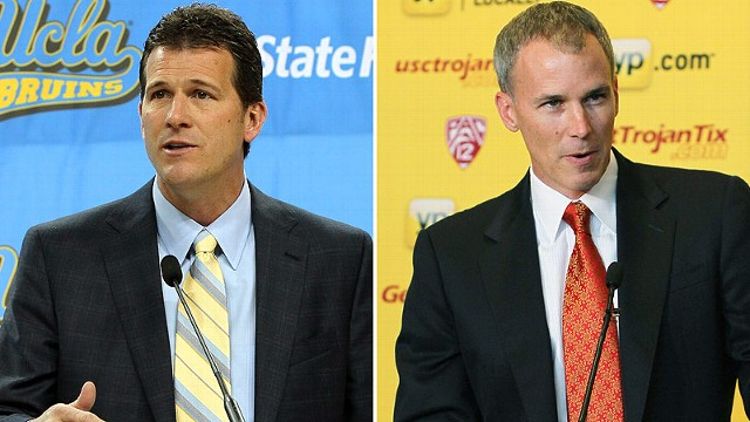 Outfitted in a scarlet tie, and in front of a gold backdrop, Pat Haden stepped to a podium yesterday to usher in a new era of USC basketball. In the past decade, Los Angeles’s lesser collegiate program has been decidedly inferior. Since the 2005-06 season, when Tim Floyd became USC’s head coach, the Trojans have won exactly three NCAA tournament games. The program’s recruiting prize from the Floyd era, O.J. Mayo, spent one year in Los Angeles, where the revelation of improper benefits forced the Trojans to vacate every win collected during his stay. In the four seasons Kevin O’Neill spent as coach after Floyd’s departure, the Trojans made the tournament once.

That sputtering is what inspired many of Haden’s opening remarks during his brief statement yesterday. “USC basketball should be relevant,” the school’s athletic director said. “USC basketball should be relevant. But let’s be honest, it has not been relevant for a while.” What better way to achieve relevancy than hitching your wagon to March’s most relevant story? The Florida Gulf Coast Eagles were the GIF’d and fawned-over darlings of the NCAA tournament’s first two rounds, and in doing so, Andy Enfield became the maestro of fun. It was a word used more than once by Haden in the first news release about Enfield’s hire. Dunk City (which USC has since stopped using, per FGCU’s request) was moving in down the street from Lob City.

Except for those in the habit of learning about the fourth coach down NBA benches, no one knew who Andy Enfield was three weeks ago. Florida Gulf Coast was a 15-seed that finished second in the Atlantic Sun and lost to a Lipscomb team with a 7-11 conference record — twice. One hot point guard and one annual Hoya disappointment later, Enfield is receiving the keys to Troy.

The risk in hiring a coach with two games on his college basketball résumé is obvious. Enfield and his up-tempo Eagles may very well have been the flashiest of flashes in the pan. But it was actually that feeling — that a team throwing alley-oops in crunch time could flame out at any point — that’s brought Enfield here. If 15-seed Norfolk State had won another game last year, there’s little chance its coach would’ve been in line for a move to the Pac-12. What made Enfield desirable to USC wasn’t the end result, it was how he got there.

Basketball isn’t relevant at USC, and it isn’t for a couple dozen reasons. Football will always be king at Southern Cal, and even the Coliseum requires a run of success before its seats are filled. Los Angeles doesn’t require a winter retreat to the warmth of a basketball arena. And even if it did, less than two miles down Figueroa Street sits an NBA arena home to two teams, one of the league’s most storied franchises and another that is one of its most exciting teams.

The competition for attention is constant, and to combat it, Haden seems to have taken a tip from the other little basketball brother in town. In two years, the Clippers have gone from NBA punch line to sold-out attraction. Winning has a lot to do with it, but so does entertainment. One route around history is to put on a show. For those recruits on the fringe, those passed over by the Dukes and the Kentuckys, the appeal of USC will be a wide-open, chuck-it-up, throw-it-down environment. Enfield may have no inroads in the California AAU world, but to start, his recruiting pitch is two games’ worth of film. Do you want to live in Manhattan, Kansas, or do you want to do this in Los Angeles? Yesterday, Haden said that his goal was to “reset the basketball culture, starting today.” He reset it, all right — by lighting it on fire.

“You’re talking about the premier basketball program in the country. To have an opportunity like this, they don’t come around every day.” One of those Steve Alford sentences about UCLA is true.

Ten days after Alford signed a 10-year deal with New Mexico, a deal that would, like fellow UCLA candidates Shaka Smart and Brad Stevens, make the Lobos coach a long-term fixture in mid-major college basketball, UCLA announced he would be its 13th head basketball coach.

Unlike Enfield’s path to Los Angeles, Alford’s has included the entirety of the college basketball ladder. He started at Division III Manchester College in Indiana before moving to the school then known as Southwest Missouri State, where he took the Bears to the Sweet 16 in 1999. The former Indiana star rode that success back to the Big Ten, where he was the head coach at Iowa for eight seasons. The basketball results in those eight years were mixed. The high-water mark came in 2006, when the Hawkeyes earned a 3-seed in the 2006 NCAA tournament, but that success was short-lived after a first-round loss to 14th-seeded Northwestern State.

For some people associated with the university it wouldn’t have mattered how many basketball games Alford won. In 2003, he openly defended Iowa star Pierre Pierce after the player was accused of sexual assault. “He’s done a tremendous job of handling things and he’s working awfully hard,” Alford said on 670 AM in Chicago. “Pierre is a great kid. He’s from a great home and this is a very unfortunate situation for him and the victim.” Alford’s actions brought dozens of protestors to Carver-Hawkeye Arena. Pierce would eventually plead guilty to a lesser charge — assault causing injury — and issue an apology for “inappropriate sexual conduct with a fellow student.”

Following a season in which Iowa made neither the NCAA tournament nor the NIT, Alford resigned and took the head job at New Mexico, where again the best season among his six ended with a 3-seed and a first-round exit. After Ben Howland’s firing, and rejections from both Smart and Stevens, Alford was offered the job at UCLA.

That Howland was fired at all is indicative of the standards in Westwood. In 10 years, Howland took the Bruins to three Final Fours, but a lack of recent success and a reportedly fractured relationship with everyone from players to boosters to local AAU coaches spelled the end. UCLA is not, like Alford said, “the premier basketball program in the country,” but it still sees itself that way.

In the school’s first statement, athletic director Dan Guerrero said part of Alford’s appeal was the “up-tempo” style he’d bring to the school. New Mexico finished 239th in possessions per 40 minutes last season. What Guerrero meant, apparently, is that Alford would bring some entertainment to Pauley Pavilion #8212; the type of entertainment that Howland’s rigid system never provided. What Howland’s system did provide were three trips to the Final Four.

Alford’s appealing contrast to Howland won’t be in the way UCLA plays; it will be in how it goes about attaining players. Alford reportedly has solid connections in the California high school world that Howland alienated. His two top scorers at New Mexico — Kendall Williams and Tony Snell — are from Alford’s new home state.

These are all solid, logical reasons behind Alford’s hire. He has the same amount of Sweet 16 appearances as Andy Enfield, but he knows how to build a team, and he understands (and is game for) the system he’ll need to navigate to keep the best California talent in state. That said, the choice can’t help but feel a bit boring. UCLA faces many of the same challenges USC does in filling its building. The newly renovated Pauley Pavilion drew fewer than 10,000 fans per game to its 13,000 seats this season. It’s hard to blame UCLA fans. A 6 p.m. drive to Westwood is a nightmare.

Jokes aside, part of the criticism about UCLA’s interest in Shaka Smart was that no high-profile recruit would want to play 20 minutes a game as part of a manic, rotating full-court press. But while Smart’s style might push recruits away, there’s nothing about Alford’s that will pull them in. By making the safe choice, Guerrero and UCLA have chosen to wrap itself in the light blue and gold, to hope that Wooden and Walton will be enough when combined with a slick-haired coach who’s not nauseated by the politics. For 18-year-olds in Southern California, that may no longer be enough — not with Dunk Town® across town. UCLA’s name outdoes USC’s, but its thinking does not. Today, the brands matter less than ever, and while Pat Haden’s gamble may fail, simply making it is worth celebrating.