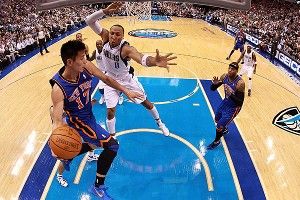 For the remainder of the NBA season, The Triangle will be breaking down the biggest games of the week. Up first: Knicks-Mavs, a game in which Tyson Chandler returned to Dallas and faced the team he won a championship ring with last season. In Dallas’s 96-85 victory, Dirk Nowitzki resumed his single-footed heroics and Carmelo Anthony gave more fuel to his growing army of critics.

Since the Knicks had amassed their full arsenal of weapons — Carmelo Anthony, Amar’e Stoudemire, Baron Davis, and Iman Shumpert returned from injury, and J.R. Smith came back from joyriding junkets down the Yangtze River — they’d gone 2-3, with losses to Boston, Miami, and New Jersey going into Tuesday’s game. The two wins were in games that presented challenges as daunting as spotting someone in Los Angeles wearing a fedora: One was a trouncing of a depleted Atlanta team, the other a rout of the Cavs. (Even then, the Knicks trailed at the half by 12.)

But things weren’t all gravy in Dallas, either. The Mavericks were cruising along on a six-game winning streak before unwittingly becoming a stage prop for Jeremy Lin’s legend-building theatrics on February 19 — specifically, 28 points, 14 assists, and five steals — and had dropped six of their last eight (including the New York game). In two weeks, the team’s narrative arc drooped from “seasoned champion rounding into shape” to “big vat of spoiled milk.” Tuesday night’s game was also a homecoming for loudmouthed strongman Tyson Chandler. He was honored with a championship ring before the game, which added a smidgen of emotional resonance for people who get weepy during commercials featuring the Budweiser Clydesdales.

Midway through the second quarter, Anthony and Shawn Marion began a long (but not overly hostile) conversation. It was unclear if the pair were talking trash, critiquing local BBQ joints, or discussing how Lamar Odom’s flirtations with the D-League might be spun into sex-swing hotness by the perverse minds at the E! network. While chattering, Anthony casually threw an inbounds pass directly into the clutches of Dallas’s Ian Mahinmi. It was the nadir in another miserable night for Anthony, who went 2-for-12 from the field and seemed content to fling up perimeter jumpers and catch up on gossip. At the end of the game, he made things worse by being caught grinning and chuckling on camera, exactly the type of post-defeat nonchalance that arouses ire from blustering advocates of steely, tough-guy basketball.

Dirk Nowitzki did Dirk Nowitzki things — swishing back-foot jumpers, going perfect from the free-throw stripe — which are by now as predictable as the appearance of luxuriant furs in Kanye’s critically panned Paris fashion shows. But slithery, sly scorers are a joy to watch, and his Dallas teammate Rodrigue Beaubois is cut from the same mink-like cloth as Leandro Barbosa, Speedy Claxton, and T.J. Ford. The 24-year-old Frenchman missed most of last season with a broken foot and only started during Jason Kidd’s recent injury, but was a handful of glycerin against the Knicks. In the first half, Beaubois helped stake the Mavs an early lead by dumping in a pair of 3s and 12 of his 18 total points. He probably won’t develop into a star, but he’s the kind of affordable talent that contenders need in this cap-obsessed era. J.J Barea, Gallic edition.

Knicks’ faithful should just be happy that Amar’e Stoudemire (26 points, seven rebounds) moved as if he’s finally shed the rusted suit of 14th-century armor he’s worn all season. He is, however, more vulnerable to crossbow attacks.

Plus/minus is a metric freighted with variables, but it’s impossible to ignore Josh “Big Jorts” Harrellson’s +13 in only 13 minutes for New York. It would be easier to discount the disparity as coincidental if he weren’t so brutishly active: In that brief window, the lumbering jack-of-one-or-maybe-two-trades had seven boards, two steals, an assist, and three personal fouls. Harrellson, Stoudemire, Shumpert, Davis, and Steve Novak were on the floor during the Knicks’ fourth-quarter rally, and their mix of offensive compartmentalization and defensive intensity was strikingly effective.

Everyone frets about the chemistry between Lin and Anthony, but the player most directly affected by the latter’s return from groin injury continues to be Landry Fields. In the last three games, he has scored a combined nine points on 4-of-15 shooting. Fields contributes in other ways — last night he had 10 rebounds and four assists — but the question of how to make him coexist with Anthony on offense still befuddles humankind’s most egg-headed scholars. Another one: How do Indian restaurants stay in business when there are never any customers in them? It’s eerie.

Lin has quick hands and works diligently on defense, but has spent the past two weeks getting sliced into ribbons by quality point guards. Dallas coach Rick Carlisle recognized his propensity for getting caught up on picks (remember when Deron Williams ran him ragged on sweeping curls and drilled eight 3-pointers?) and made Lin struggle through thickets of bigger bodies at the top of the key. Veteran Jason Kidd lacks blurring foot speed, but calmly knocked down 3-pointers when Lin went underneath picks instead of scrambling over them. His 15 points were a season high. It doesn’t get easier, as Lin faces Tony Parker tonight.

New York coach Mike D’Antoni putting Anthony back in the game. The Knicks staged their fourth-quarter surge with Novak at the small forward slot and — hold up. Let’s be serious. Anthony is a perennial All-Star, inked to a max contract and the same dude the Knicks traded half their roster for a year ago. He has to play the closing minutes, even if he was behaving like a stooge all evening. The downside to putting him back in the game (losing) is far less dangerous than if you leave him on the pine (betrayal, subterfuge, sabotage, disillusionment, uncontrollable sobbing, Occupy MSG, La La’s Big Payback, etc.).

The Knicks may now have superior overall talent, but the Mavericks are surely more cohesive (as one would expect from a team that won a title last season, duh). Late in games, Dallas insists on force-feeding the ball to Nowitzki in more or less the same spot on every possession. If the double-team comes, he passes; if the double-team doesn’t come, he shoots. That simplicity eludes the Knicks. On New York, playing time seems predicated as much by real-time meritocracy than any rough-hewn script detailing when different characters are supposed to appear onstage. And while the Knicks ad lib, Anthony needs to be more leading man than comic relief.