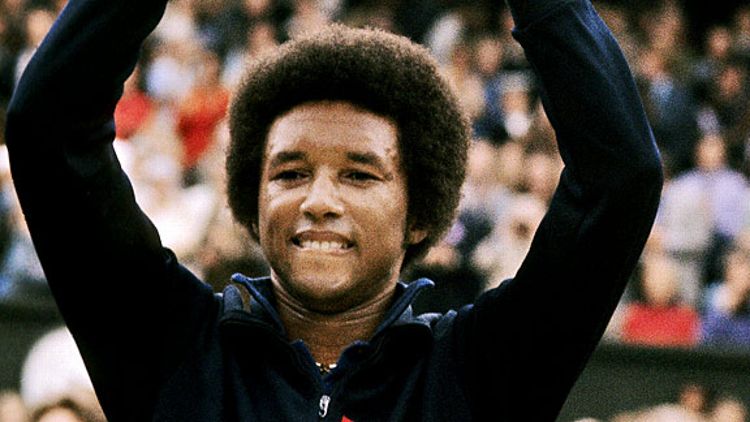 The first time I held Days of Grace — tennis great Arthur Ashe’s autobiography — in my hands, I was 13 years old. At the end of a very successful summer, my tennis coach gave me the book, almost as a trophy signaling my Mitzvah into adulthood. He looked at me and said:

”I think you’re finally ready for this.”

Expecting it to be an exciting chronological account of Ashe’s tennis career, I thought I was ready, too. After Chapter 1, however, tennis had hardly been mentioned. The text focused on Ashe’s very personal take on being “outed” for having AIDS by USA Today. Then came Chapter 2, titled “Middle Passage.” Fearing what this might be about, I put Days of Grace on my bookshelf. I wasn’t ready yet.

Three years later, as it became exceedingly clear that my days of serious tennis were behind me, the book resurfaced. Remembering the radical direction Ashe seemed to be headed in the book, I took it off of my shelf and finished it in one sitting. It was like nothing I had ever read from a sportsman.

Many athletes have been referred to as being bigger than their sport. Michael Jordan was larger than basketball because kids in every corner of the Earth wanted to be “Like Mike” and had the no. 23 Bulls jersey to prove it, even if it was one of their few pieces of clothing. Muhammad Ali transcended boxing because his mouth and his beliefs made him as much of a cultural icon as his powerful fists and quick feet. Ashe was a brilliant athlete, but he was so much more. For him, tennis seemed more like a means to an end, and that final end was the completion of Days of Grace. Ashe wanted to be great, but he was far more concerned with his true greatness coming off the court than between the chalk.

Ashe, on his playing style:

Perhaps I was even more pleased by the way I had played than by my results in terms of wins and losses, or even in terms of prize money. I had done nothing, through scandal or bad behavior, to bring the game into disrepute.

I liked being reckless, as long as I was reckless only on the tennis court, and as long as I won. Fans deserve to see a player with flair, someone for whom tennis is an art as well as a craft.

These are the words of a man more interested in cementing his legacy as a person than as a player. He recognized that tennis was something he excelled in, but he seemed determined to use the power and fame he earned on the court to serve others as much as himself. Ashe wanted people to see and respect this physical gift he had, but more than that he wanted his display of this gift to be what truly impacted those who saw him play.

His philosophy on being an athlete becomes most evident as he describes the trials of his stint as captain of the U.S. Davis Cup team. Although he greatly admired Jimmy Connors and John McEnroe, Ashe could never get over the way their emotions got the best of them on the court. At one point, Ashe threatened to default a match if another outburst took place. It seemed like an attempt to teach his players (who were also his peers) lessons in a way that rarely occurs outside of high-school athletics. He wanted to win, but he wanted to win with grace. If he couldn’t win respectfully, where was the joy in winning? This was his philosophy in tennis as well as in life.

Despite its variety of topics, Days of Grace should always be thought of as a sports book, with the caveat that it reads a lot more like The Autobiography of Malcolm X than The Breaks of The Game. This is true in the sense that both men, Malcolm and Arthur, were writing what they knew would probably be their final work. With Malcolm, he almost prophetically knew that he would be killed, and with Arthur, there was no telling how many months or years he could continue to live with AIDS. Both men, seemingly racing to get all of their thoughts out on paper, succeeded, but neither lived to see their words get published.

Although Ashe seemed more concerned with positively impacting society, especially in his final years, his most heartbreaking words in Days of Grace, which concern his emotions after learning that he was HIV positive, remind us of his unparalleled love and respect for the game of
tennis:

I wondered if I would ever see Wimbledon again.

He didn’t write, “play Wimbledon again” and he most certainly did not write, “win Wimbledon again.” He just wanted one last moment with the place that, like him, strived to represent grace, honor, and tradition.

With his life and with the thoughts and prose in Days of Grace, Ashe represents what the modern-day athlete can be, but rarely ever is: appropriately and responsibly controversial. Arthur lost some fans, not because he called a referee “faggot,” but because he expressed his beliefs on race relations. Arthur broke the law, not because he shot someone in a club, but because he protested during an anti-apartheid rally. And after retiring, even after attempting to just relax and take it easy, he said he couldn’t handle it, stating:

As much as I enjoyed this leisurely life, however, I found myself continually looking for a chance to do something more purposeful and consequential.

This is the man we lost almost 19 years ago, at age 49. It’s a shame, because though Ashe might have known Days of Grace was the end, imagine the impact he would have were it simply the beginning.

Previously in this Series:
Among the Thugs
Ghosts of Manila
Sports Book Hall of Fame: The Inaugural Class