So You Want to Buy World Cup Tickets … 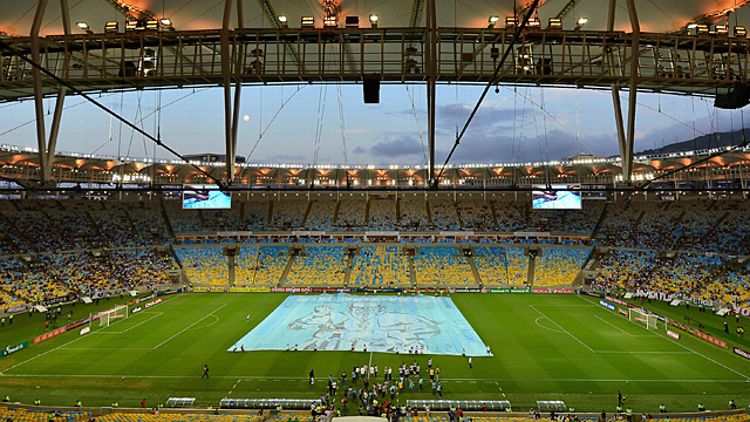 So you want to go the 2014 World Cup? Well, you’re in luck. Because you can! And by “can,” I mean you can apply to do so! Not now, but soon. Probably. It is complicated. To fully understand the system FIFA has put in place to distribute the 3.3 million tickets available, they have released both a 30-page brochure and a 90-minute video that you can read and watch (with the enticing headline Relive the FIFA World Cup ticketing announcement), or, alternatively, you can allow us to do that for you. So many pie charts. So much double speak. Let’s just say that 80 minutes into the FIFA video one of the journalists in attendance asked apologetically, “Um, do I understand this at all?” (He did. Kind of.)

The entire system is being run as a three-stage lottery, with the bulk of tickets being made available for purchase starting August 20. From that time through mid-October, anyone from around the world will be able to apply for tickets based on price, venue, and the country they support. Tickets will be assigned randomly from the pool that applied in early November based on availability. This is a process that will likely be familiar to World Cup fans who have also tried to attend Burning Man in the past couple of years, a Venn diagram that I believe only includes my friend Monty. No matter.

Tickets start at $90 for international supporters, though to have a better chance of actually being allocated a ticket, one will likely have to enter the lottery at the Tier 1 level, with ticket prices starting at $175 per seat. FIFA will not reveal the percentages of tickets that they are allocating to each tier, or to which tier hospitality tickets (tickets sold with expensive transportation and lodging packages) are being assigned (except that they will include all Skybox seats), but this chart makes things pretty clear:

Tier 1 is the blue tier. So … yeah. For the knockout stages, prices are even higher. If you want to go to Brazil to see the World Cup, expect to spend money.

Deciding how you want to apply is also an issue, as there are a number of options at play. For example, you may want to follow a single team through the tournament. Great! Except that you don’t know how deep into the tournament they will advance. Meaning that you can apply for tickets to follow a team (though don’t expect to get tickets if that team is Brazil) up through the knockout round. This, of course, is a gamble. As an American fan, do you go for the quarterfinals? How good are you feeling? The semis? Really? If you get tickets, and you have paid for a round that your side doesn’t advance to, you will still be paying for tickets to the match that your team would have made even if they don’t make it. Naturally, that match will feature the team that just beat your team. Pleasant!

Note that if you want to avoid this whole rigamarole, you can always purchase hospitality package tickets, which can be acquired by bartering the giant sapphires you use as paperweights or the gold sheets on which you sleep. The super-rich sleep on gold sheets, yes? Hospitality tickets are more expensive than the already very expensive proposition of going to the World Cup, but they are a sure thing, whereas this lottery system is rife with uncertainty. Also note that if you have some friends interested in attending and you are attempting to purchase tickets on their behalf, make sure that your name is the primary one on any application; once the tickets are assigned, you will be unable to change or resell the primary ticket without exchanging or reselling the entire batch of assigned tickets (seriously).

Let’s say you get tickets! You did it! You’re good to go! Just look up your seat … um … no. You actually don’t have a seat yet. FIFA has yet to ensure that all of the seats are in the stadium, mostly because six of the venues are still being built. Lest they suffer a Cowboys Stadium Super Bowl scenario (a scenario that repeated itself at this year’s Confederations Cup), they are only guaranteeing that you will have a ticket when you win the lottery. You won’t actually have a seat until all the stadia are inspected (literally seat by seat) in 2014.

After that happens, you’ll just print out your ticket, which will be scanned at the stadium … no? No. You will actually need to go to a FIFA World Cup Ticket Center in Brazil (which will be located in the airports and downtowns of the 12 host cities) between April 15, 2014, and the match date. Then, the primary purchaser of your batch of tickets can show their passport and pick up the tickets in person. FIFA marketing director Thierry Weil said he hopes that people will be able to get a drink in these centers, which, on the one hand, a caipirinha sounds nice, but on the other hand, this suggests that picking up tickets won’t be a quick in-and-out procedure.

Well, now that you have tickets, things get … immeasurably harder. Because Brazil built or renovated 12 World Cup venues instead of the required eight or expected nine, and refused to invest in the transportation infrastructure of the country to support the event, traveling between venues likely will be the hardest aspect of attending the World Cup. Intra-country flights are expected to be both the only way to get from far-afield venues and, again, very, very expensive.

But would things be so expensive if you were Brazilian? The overwhelming media narrative surrounding FIFA’s announcement of ticket prices has been related to the discounts afforded Brazilian citizens attempting to purchase tickets. Whereas tickets for non-Brazilians start at $90 a seat, Brazilian residents will be able to apply for tickets for as little as $15 a seat. Which seems like a huge boon for the Brazilian people until you look at the stadium chart again:

That pink section? That represents tickets for Brazilians. The total number available to Brazilians to purchase at these lower rates is 400,000, or around 6,250 a match. 400,000 is both a lot of tickets (around 11 percent of the total pool) and statistically almost no tickets. When you are talking about a soccer-mad country of 200 million, 6,250 a match is not that many. While these tickets will not be the only path for Brazilians to see the World Cup — 100,000 additional seats are also reserved for government officials (oh boy) and stadium construction workers — they are the only realistic way for most Brazilians to attend the matches. Brazilians will of course be able to apply for the more expensive international tickets, though those tickets would represent a serious financial burden for average Brazilians, who earn under $10,000 a year.

Does FIFA get credit for doing its best here? In a way, yes; it is dealing with a massively limited resource in terms of tickets compared to the potential demand, and it has a pricing tier that is artificially low so that its event is not impenetrable for a local audience.

That said, the massive public expenditure on stadia for the event, which has yet to be matched by transportation and infrastructure investment, means the actual cost to the average Brazilian for hosting this event is massively high.

While it was not FIFA’s direct responsibility to ensure that the nation’s priorities were in line when charting a path for World Cup–related investments, the anger that the country feels toward soccer’s governing body is understandable. Even a much-maligned South African effort resulted in new train lines and airports as a legacy from their World Cup. The average Brazilian will likely neither see the impact of the influx of money into the country nor have access to the matches.

This is an unfortunate legacy for this event, one that should be troublesome for anyone considering heading down to Brazil to take in some soccer. On the purely practical level, there is uncertainty; will anyone be able to get around? Will the nation be ground to a halt during the event because of protests? Morally, the questions are also tricky. FIFA president Sepp Blatter has, as is befitting a man with the name of a lesser Star Wars villain, suggested that it is in Brazil’s best interest to make sure that this year’s massive Confederations Cup protests don’t happen again. His statement mostly ignores that the protests weren’t happening in a vacuum, they were happening because the government chose circuses over bread (and schools and hospitals), much to the dismay of its people. What is it to travel to a country, when the money spent on that travel goes toward a corrupt sports organization?

All of that said, I am still planning to go. It’s the World Cup in Brazil. The appeal is overwhelming. Specifically, I’ll reveal that my plan is to apply for the venue-specific tickets in São Paulo as well as trying to pick up one more match farther north after the draw happens (hopefully supporting the U.S. if they aren’t otherwise assigned to São Paulo). Other options that sound appealing include following a gutsy young Belgian side around (the team among the true 2014 contenders with the smallest traveling fan base and therefore the easiest-to-acquire tickets), basing oneself out of Rio to see a match at the legendary Maracana, or trying to get tickets at a couple of the coastal northern venues and busing between them to enjoy a balmy Brazilian winter by the beach (you can see where each match is played by clicking here and rolling over the matches; don’t try to look on the FIFA schedule page, as the image with each match location is illegibly small. They can certainly be blamed for that).