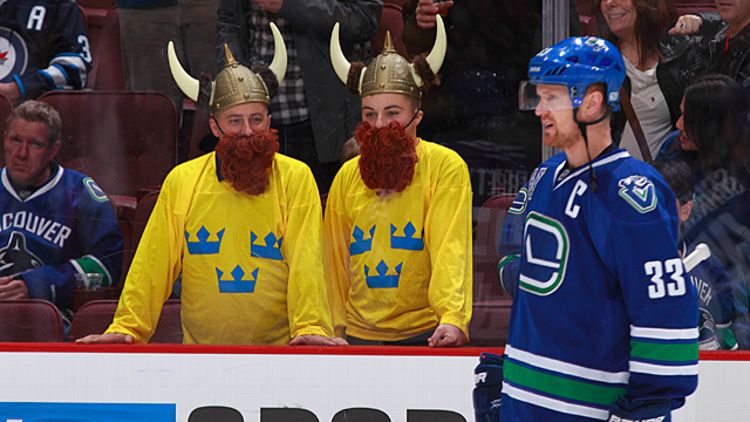 Football season is over, which means NFL fans are now facing the depressing prospect of going months without their favorite sport. But there’s good news — another professional sports league is perfectly suited to fill that void, and its season just started! I’ve prepared this handy NHL FAQ for football fans in withdrawal, who are wondering what else the sports world might have to offer.

Q: I’m an NFL fan, but the season is over now. Is there anything else I can watch to pass the time for the next few months?

A: You’re in luck! There’s another league that’s still playing right now, and it includes many of the elements of professional football that you know and love!

Q: Sounds interesting. Can you tell me more?

A: Well, it’s called the National Hockey League, and it …

A: Wait! [Dives on to windshield.]

A: The fact is, NHL hockey is just about the perfect substitute for NFL action. Whatever it is you love about professional football, you can find something similar in hockey.

Q: OK, so you want me to watch hockey. But I’d have to get all caught up — it’s already February, so the season’s half over.

A: Not this year!

A: That’s right. We had a lockout! You football guys know what a lockout is, right?

Q: Yeah, it’s a work stoppage in which the owners lock the players out until the two sides can reach an agreement.

Q: Which is a process that can sometimes take several months.

Q: In a worst-case scenario, even wiping out a few weeks of offseason workouts and some of the preseason schedule.

A: Well, in some leagues, sure. But we prefer to have our lockouts wipe out massive chunks of the regular season. Sometimes even a whole year. Look, it’s kind of a Jeremy Jacobs thing.

A: Think Jerry Jones without the humility.

A: But the point is, the season just started. So if you jump in now, you haven’t really missed much.

Q: And you say the NHL can offer everything that NFL fans have grown accustomed to?

Q: OK, let’s go down the list. For example, one of the biggest stories in the NFL in recent years has been concussions.

Q: So what is the NHL doing about concussions?

A: Awareness of concussions is increasing rapidly. The league has commissioned several studies, the commissioner has expressed deep concern, and fans and media talk about the issue constantly.

Q: Right, but what are you actually doing?

Q: Hm. OK, that actually does sound a lot like the NFL.

Q: OK, but football fans also just went through that weird story with Ray Lewis and deer antlers. Do hockey fans ever have to put up with these sorts of PED stories?

A: Hockey does not have a PED problem.

Q: Really? That seems sort of odd, given how physically demanding the season is and …

A: HOCKEY DOES NOT HAVE A PED PROBLEM!

Q: Do they even test for them?

A: Of course they do. There’s a comprehensive testing program in place. And in the entire history of that program, only one player has ever failed.

A: HOCKEY DOES NOT HAVE A PED PROBLEM! [Slams hands over ears, curls up in fetal position, rocks back and forth on floor.]

Q: Fine, fine … Do you guys have power failures?

A: Do we ever! In fact, the NFL ripped off the whole “have a power failure disrupt your championship” directly from the NHL. Oh, and hockey people also occasionally shut the lights out on purpose when a group of teenagers start punching each other.

A: It seemed like a good idea at the time.

Q: So it sounds like the people in charge of hockey have a history of making bad decisions.

A: Pretty much all the time, yes.

Q: Wait, you don’t have replacement refs, do you?

A: Uh, nothing … nope, no replacement refs here. It’s the same guys, every game. Every … single … game.

Q: Wait, do you have any coaches who are brothers? I couldn’t get enough of that story!

A: We don’t think so, though we’re still waiting on the DNA tests to come back on Randy Carlyle and Bruce Boudreau. But plenty of the players are brothers.

A: Pretty much of all of them, actually. There’s like eight families left that are still producing hockey players.

Q: Cool, so you still have the “brother vs. brother” storyline?

A: Well, not really. It’s some sort of hockey rule that every set of brothers has to play on the same team for some reason. The Staals, the Sedins, the Stastnys, the Bures, the Schenns — everyone gets to play together at some point. It’s kind of like Little League.

Q: Is there some sort of reason you don’t let brothers play hockey against each other?

A: Just trust us.

Q: OK, but what about Tim Tebow? Do you have anyone similar to him?

Q: He’s a guy who prays all the time and cries occasionally, and he spent the last year standing around helplessly watching his team find embarrassing ways to humiliate itself.

Q: The media fawns all over him but most people hate him.

A: Yeah, definitely a Leafs fan.

Q: I guess I just need to pick a team.

A: Well, let’s see if we can find you a good match. Tell us, what was your favorite football story of the last few weeks?

Q: Honestly, I think it was probably that whole Dan Marino thing. Does hockey have any examples of someone who should know better throwing away millions of dollars to have their regrettable lapses in judgment kept hidden away in the southwest?

A: Congratulations, you’re the newest fan of the Phoenix Coyotes!