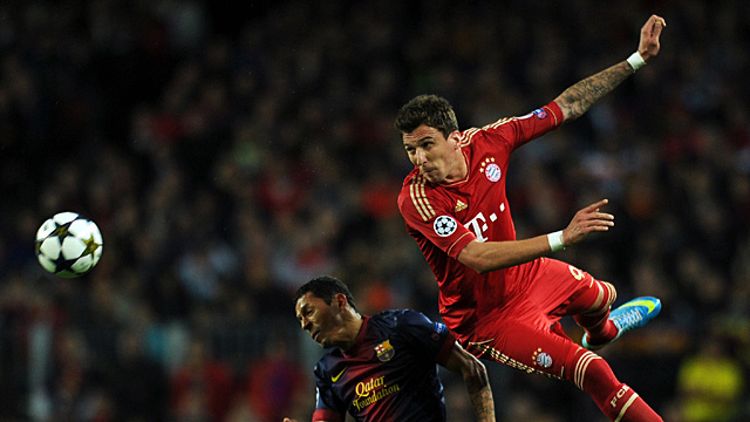 Borussia Dortmund midfielder (and soon to be Bayern Munich player) Mario Gotze was subbed off after less than 20 minutes of their second-leg match at the Bernabeu with a suspected hamstring tear. His removal had a rather negative effect. Kevin Grosskreutz, who by the standards of German midfielders is an elderly 24, came on for Gotze. Marco Reus, who started the match in a roving left winger role, shifted into a more central position, more advanced than where Gotze had been playing. Grosskreutz tucked in on the left.

While his positioning and tracking were acceptable, Grosskreutz’s touch and decision-making were not. Too frequently play broke down as balls were funneled in his direction. Grosskreutz is a very good player to have as your first choice off the bench in the Bundesliga; he is not up to the standards of starting in the midfield for a Champions League finalist.

Gotze is a unique talent, but he will have to be replaced with someone capable of creating alongside Reus. Problem is, Dortmund already lost that player. His name is Shinji Kagawa and he plays for Manchester United now.

The two biggest blunders of the round came from two of the most highly touted young center backs in the world. First, Mats Hummels of Borussia Dortmund in their first-leg match against Real Madrid:

Under almost no pressure, Hummels looks to play the ball back to his keeper, Roman Weidenfeller, but instead mis-hits what ends up being a perfectly weighted through ball to Gonzalo Higuain. Hummels has a history of combining brilliant tackling, world-class distribution, and brain-exploding miscues at critical moments.

Similarly, let’s look at Gerard Pique, well after his tie against Munich was decided. Franck Ribery crosses and …

Oh boy. That was clinical. Victor Valdes didn’t have a chance.

I think there’s a misconception that the goalkeeper has the most scrutinized job on the pitch. While the occasional astonishing howler will draw a fan base’s ire (hi, Robert Green!), so much of a goalkeeper’s work is about positioning, which makes sussing out responsibility a challenge. Center backs, though, their mistakes remain writ large. Both Pique and Hummels have skill sets that make them incredibly valuable (Hummels is likely to join Gotze on his way out of Dortmund this summer on an eight-figure transfer). But they both bring with them a history of critical errors that have cost their teams goals in extremely visible moments.

This all raises the question, would you rather have a less athletic center back who is less error prone manning the defense for your team, or an astonishing talent who frequently finds himself on the wrong side of the highlight reel? A perhaps reductive example from the EPL: Should a Chelsea fan prefer Gary Cahill or David Luiz? There’s something of a Rorschach test implicit in the question that speaks to a fan’s risk aversion. There is not necessarily a right answer (OK, Luiz is better, but work with me here), there is only a sense of what the role of a defender should be on a club.

OK, so let’s have some fun. Sure, Bayern just beat the presumptive tournament co-favorite 7-0 over two legs. And sure, they did it by imposing their will upon their Spanish counterparts. And they managed to have their three best tacklers, all one yellow card away from a critical suspension for the final, come through a road leg at the Nou Camp unbooked. And yes, the scoreline could have been even worse for Barcelona, especially in the first leg at Allianz Arena.

That said, did anyone else think that in the first leg the finishing could have been a little better for Bayern? Like, maybe Mario Gomez (despite the quality of his theme song) shouldn’t be the first-choice striker for the newly anointed best club in the world? And in the second leg, shouldn’t a team nursing a four-goal lead be better able to control the game from further up the pitch? Like a real no. 10 should have been where Thomas Muller was, and Arjen Robben, despite his brilliant goal, was an unnecessary piece for a team holding a lead?

What’s that? Gomez is actually going to be at best the third-choice striker for the side next season, if he’s on the team at all? And Robben will likely be gone with both a healthy Toni Kroos and newly acquired Gotze in the side, either of whom could provide a steadier presence at the 10, or even play as a false nine? And, again, they won 7-0 over Barcelona? Oh. Carry on then.

What is, for lack of a real word, un-nitpickable is any conversation surrounding the play of Bayern Munich’s double pivot of Javi Martinez and Bastian Schweinsteiger. While Martinez neutralized Andres Iniesta (seriously, was Iniesta even out there? He was 2-for-6 in take-ons at the Nou Camp), Schweinsteiger completely dominated the center of the pitch in both matches. He went 12-for-14 on tackles, including a stunning 6-for-6 in the second leg while a card away from suspension. He was also the top passer on his side in both matches.

Schweinsteiger’s fitness has been the most important step in Bayern’s evolution this year. While the additions of Dante, Mario Mandzukic, and Martinez have all made the Bavarians better, they all represent modest improvements over what had been the status quo; Gomez, Holger Badstuber, and Luiz Gustavo are all very good players. Schweinsteiger, though, was a shell of himself for the bulk of last season; while his intelligence in distribution continued to improve, his physicality and pace declined. This season has been both a physical return to form and a continued improvement in the more cerebral aspects of the game. For all of the downsides related to the implications of Gotze’s transfer, the opportunity to see him build a rapport with Schweinsteiger in Bayern’s midfield is a droolworthy proposition.

Mourinho Got It Wrong (in an Unexpected Place)

While Borussia Dortmund went into the Bernabeu with a three-goal advantage, they proved lucky to come out ahead on aggregate. Looking at the prematch team sheets, Jose Mourinho’s biggest gamble appeared to be deploying Luka Modric as the second half of his pivot alongside Xabi Alonso. Alonso, held so well by Gotze in the first leg, clearly needed offensive support alongside him, but Modric’s inclusion was a risk as it left Madrid vulnerable down the middle.

Modric played well, though, and he and Mesut Ozil combined nicely to create a much-needed offensive threat.

What wound up being Mourinho’s undoing was his selection of striker. Higuain had a nightmarish match, consistently spurning chances and finding himself needlessly offside. The error was made more apparent by Karim Benzema’s sharp play after being substituted on late; the Frenchman scored a goal and was crucial in the buildup to Madrid’s other goal as they got themselves back into the tie in the final 15 minutes. Both Higuain and Benzema have had up-and-down years, and selecting either was a risk; what really cost Mourinho was his failure to purchase a striker last summer.

In all of the crowning of Bayern, burying of Spain, and gnashing of teeth around Gotze, let us not forget that Robert Lewandowski scored four goals against Madrid in a match. Four!

So before the Wembley hype takes over, let us watch one man score four goals against Real Madrid in a Champions League semifinal:

Reus to Ilkay Gundogan to Reus, who touches it lightly to Gotze, who crosses perfectly to Lewandowski, who just gets a toe on it. Dortmund football.

Again a touch (this time a drag rather than a cushion), again a turn. This time, though, no finesse. Just an explosion into the top of the net.

The only mistake Lewandowski made in the first leg was not going for the Panenka. Come on, Rob. Show some style.