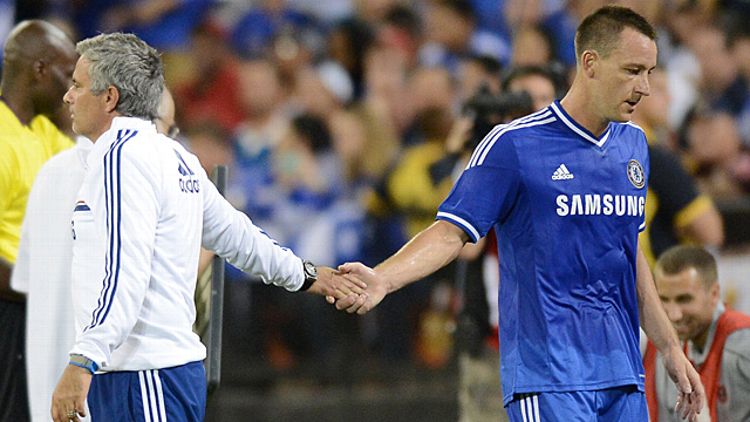 A new Premiership season approaches! The ex-best league in the world springs back into action on Saturday, and it’s shaping up to be a classic, destined to be closer to the nonstop thrill ride of the 2011-12 season than the processional inevitability of 2012-13. If the bookmakers are to be believed, the 2013-14 vintage will be one of the closest Premier League seasons ever, with Chelsea, Manchester City, and Manchester United — installed as (near enough) joint favorites. This is great news for both sports fans and degenerates alike, so with that in mind, here are a few bets to keep interest in the coming season burning all the way to May.

(All odds are the best prices quoted from the odds comparison site Oddschecker.)

It’s been a while since Arsenal won a trophy. In fact, it’s been so long that there are now clubs in the fourth division of English football who have won major silverware more recently than Arsenal. However, the omens for this season are good; the last time Arsenal won a major trophy, Chelsea were managed by a certain Jose Mourinho. Plus, there’s a definite sense of now or never about Arsenal this year — with the three favorites evenly matched and all breaking in new (or nearly new) coaches, there’s room for Arsenal to sneak up on the rails, or even take the lead from the start and cling to it until next summer. The Fixture Computer has dealt Arsene Wenger’s men a gentle opening to the league campaign; they don’t have to face any of the Big Three until November, and by that point Arsenal’s rivals will all have played each other twice, dropping many points in the process. If the Gunners can get off to a good start this season, they could put together an unassailable lead, and finally reset that damned clock. Plus, there’s another factor that might play into Arsenal’s hands …

Jose Mourinho to be the next EPL manager to leave his post: 66/1

As a Chelsea supporter, I wish this wasn’t the case, but the joyous reunion of Chelsea and Mourinho is doomed from the start. They are the 21st century equivalent of Elizabeth Taylor and Richard Burton, and this reunion may not even last as long as that couple’s ill-fated second marriage. The chief problem is that expectations at the club are ludicrously unrealistic; while the bookmakers forecast a close three-way battle, most Chelsea fans believe the league title is already won, and are now merely curious to see what other trophies Mourinho can bring them. When the reality fails to live up to the fantasy (as it surely will), there’s going to be a lot of broken wedding gifts at the training ground.

To make matters worse, there’s an ex-girlfriend lurking in the shadows. Chelsea fans may have been carrying a torch for Jose for years, but Chelsea’s owner, Roman Abramovich, has always thought of Guus Hiddink as the one that got away. The Dutchman recently quit his well-paid job as coach of Russian outfit Anzhi Makhachkala, and as long as Guus is footloose and fancy free, 66/1 on Mourinho being the first EPL coach to get the boot (much like Roberto Di Matteo last season) is tremendous value. Hell, it could happen tomorrow! But I feel it’s time to add a slightly more dependable tip to this list …

It seems certain that if Manchester United win the league, van Persie will be adding a somewhat redundant third shoe to his glittering collection. No one else at United is going to win it; the ongoing Rooneysaga will either end in a transfer to Chelsea or an extended sulk, and while Javier Hernandez and Danny Welbeck have many fine qualities, neither are likely to depose RvP as the principal getter of goals at Old Trafford. And if United don’t win the league? Well, the Golden Boot is usually a consolation prize; in the 21 Premier League seasons to date, the trophy has either been won outright or shared by a non-champion on 14 occasions (including RvP’s own 2011-12 campaign for Arsenal).

What’s more, it’s hard to see who the other challengers will be. Second favorite Sergio Aguero (9/1) could manage only 12 league goals last season, and was unable to outscore van Persie despite winning the league in 2011-12. The third favorite is the aforementioned Wayne Rooney, who might conceivably achieve the feat in a Chelsea shirt, but isn’t likely to threaten if he stays at Man United. Backing any of Chelsea’s strikers seems foolhardy, as nobody knows who the first choice will be; you’ll get 25/1 on either Romelu Lukaku or Fernando Torres, and while Lukaku is obviously much better value, there are no assurances that either player will start 20 games, never mind score 20 goals. Meanwhile, Luis Suarez (18/1) probably won’t be sticking around at Liverpool for long enough to trouble van Persie either. Finally, thoroughness requires me to mention Christian Benteke (18/1), Roberto Soldado (20/1), and — no, seriously — Daniel Sturridge (22/1). You can back Gareth Bale to win the Golden Boot at 25/1, which would be a pretty impressive feat since he’ll probably be playing for Real Madrid.

All things considered, this has to be the best bet on the boards this term. However, if you fancy a bit more value than the 7/2 on RVP, you can get 80/1 on RvW (that’s Norwich City’s delightfully named Ricky van Wolfswinkel), and if you want to back a different ex-winner of the prize, there’s 100/1 on the 34-year-old Nicolas Anelka, who has inexplicably turned up at West Brom, or 500/1 on the 40-year-old Kevin Phillips, making an even more improbable return to the Premiership with Crystal Palace. Speaking of which …

Here’s a probably meaningless statistic: In the 17 seasons since the Premier League switched over to the current 20-team format, only 22 out of a possible 51 teams have been immediately relegated after gaining promotion to the top flight, and seven of those sides came up as Champions. There seems to be a tendency for the Championship winners, flushed with success, to over-invest in expensive foreign imports in preparation for their assumed lengthy stay in the top flight. Meanwhile, the teams who fought harder to gain promotion seem to spend conservatively, which often proves the right course of action.

That certainly seems to be the case this season. Cardiff (promoted as Champions) have spent twice as much as Hull and Crystal Palace combined, but have secured the services of only five new players, compared to eight each for the other promoted sides. More worryingly, most of Cardiff’s spending has gone on untested foreign talent; $17 million on Sevilla’s Gary Medel, and nearly $12 million on Cornelius Andersen, a very young striker who has played just one full season in the comparatively sleepy world of the Danish Superliga. They’ve also picked up Steven Caulker from Tottenham, but otherwise Cardiff seem desperately short on Premier League experience, with Craig Bellamy the only other player in the squad that will be recognizable to those unfamiliar with the lower leagues. Both Hull (Abdoulaye Faye, Maynor Figueroa, Danny Graham), and Palace (Kevin Phillips, Danny Gabbidon, Marouane Chamakh) have more — and more recent — Premier League experience on their books, and seem better equipped for survival as a result.