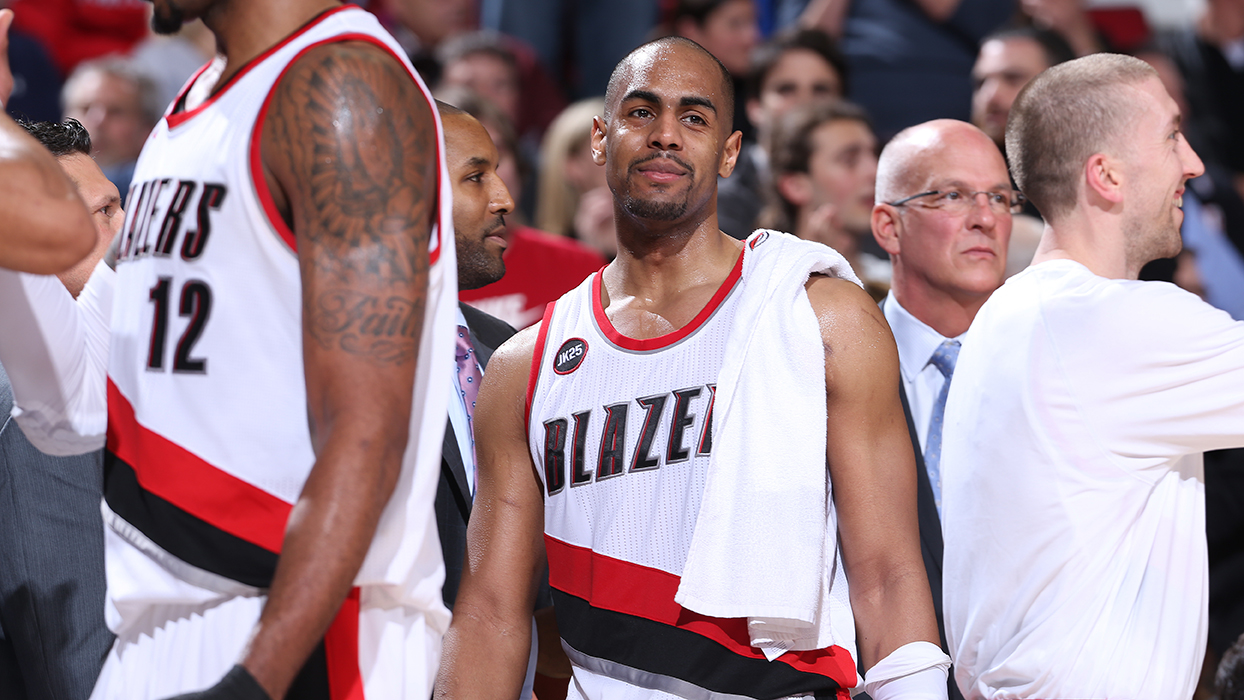 The morning before Wesley Matthews’s torn Achilles tendon turned the glowing Portland Trail Blazers into a Big Sean album cover, I asked Arron Afflalo — who was acquired just two weeks prior — how he felt joining a team that already knew what it was. Did he have any concerns at all about meshing his game with a starting five that was already one of the league’s most confident and productive units?

“I mean, obviously an in-season trade is always tough because you have to adjust on the fly, you don’t get the offseason or a preseason to prepare,” he said. “But in terms of chemistry, I was aware of this team’s pedigree as a starting unit. I just had the mind-set of trying my best to fit in, to make it easy.” Afflalo exhaled. “I’m not trying to have them restructure their offense around my strengths.”

One day later, Matthews’s season was over and Portland’s championship aspirations took a roundhouse kick to the temple. But stakes remain high for Afflalo, and the entire situation presents an intriguing dichotomy.

On one hand, before Matthews went down, the Trail Blazers believed Afflalo would boost a bench that needed offensive punch and two-way versatility. He was Terry Stotts’s brand-new Beretta. Now, a little more than a month before the playoffs start, Afflalo steps into an unexpectedly critical role; instead of complementing Portland’s core, he joins it. And the bench is back to square one.

“They’re not going to wait for him,” Clippers coach Doc Rivers said about Afflalo before facing Portland last week. “They’re going to keep playing, and he has to figure it out.”

On the other hand: This is an amazing opportunity. Afflalo has a $7.5 million player option for next season, and it’s likely he opts out. A month ago, he was gathering dust on the Denver Nuggets. 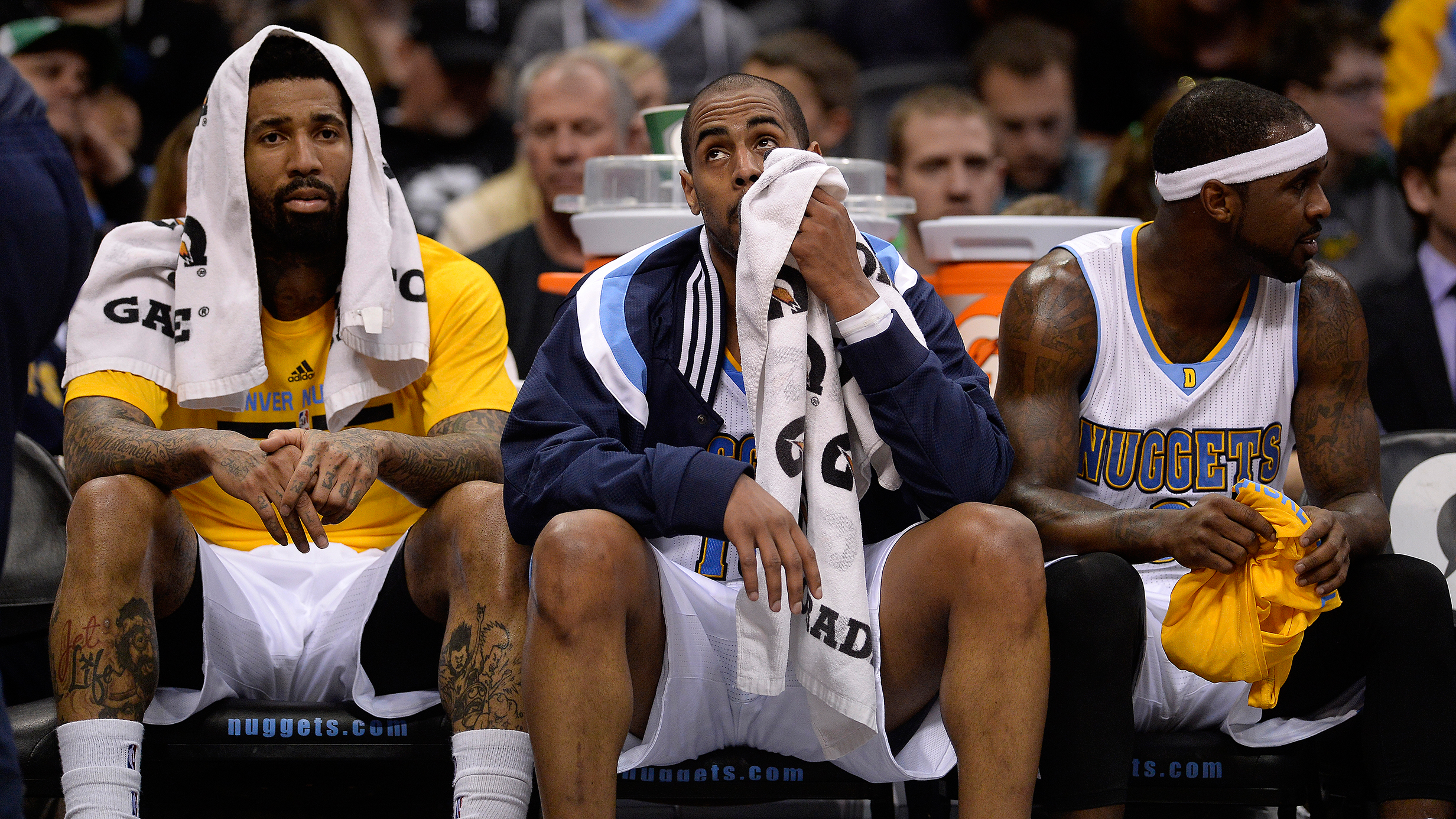 Quality shots are hard to come by when nobody’s on the same page. One year after averaging 18.2 points per game and making 42.7 percent of his 3s, Afflalo’s accuracy from beyond the arc dropped to 33.7 percent with Denver. The situation was bad; he wasn’t maximizing his potential in a possible contract year at the age of 29.

“[Shots] are different,” Afflalo said, comparing his experiences in Denver and Portland. “Most of basketball is played the same way, with high pick-and-rolls and post-ups. But obviously [Portland has] a flow to the game that they’ve been functioning very well with all season long. Catching and shooting is a big part of the game, especially if you got other good players out there who can create those shots for you.”

According to SportVU, 22.6 percent of Afflalo’s shot attempts with the Nuggets were open 3s. That number is 26.9 percent since the trade, and he’s made 10 of 24 attempts (41.7 percent) with Portland.

Unfortunately, aside from effective outside shooting and smarter shot distribution (Afflalo has all but abandoned midrange jumpers), it’s been a rocky transition. Since his debut, the Trail Blazers have been marginally better with Afflalo on the bench; in the 51 minutes he’s shared the floor with Damian Lillard, Nicolas Batum, LaMarcus Aldridge, and Robin Lopez, Portland has been outscored by 11.8 points per 100 possessions, scoring at a rate the Philadelphia 76ers would laugh at.

But we’re dealing with a seven-game sample size that reflects the integration of one player into a totally different environment. These things take time, and it’s hard to imagine a long-term scenario in which Afflalo falls on his face. He is now the fourth or fifth option on an unselfish team that’s going places — at the very least to the postseason. His role is clearly defined. There’s motivation to play hard every single night. If he does well and the Trail Blazers win a round or two, his value on the open market will explode. This is Afflalo’s eighth season. He’s smart enough to understand that team success is the most meaningful trump card his agent can slap on the table during summertime negotiations.

In a vacuum and on Portland’s roster, Afflalo isn’t as good as Matthews. But he should be able to replace a decent amount of the lost offensive production. According to Synergy, Afflalo is averaging 0.99 points per possession on post-up plays this season (placing him in the 83rd percentile). Portland doesn’t isolate very often, but it loved using Matthews on the block, and Afflalo is a Xerox copy down there. “I take pride in being pretty versatile as a player,” he said.

The other half of his game is far from a weakness. When I asked Lillard how Afflalo would make Portland a better club, he immediately focused on his new teammate’s ability to stop the opposition. “He’s a guard who can defend 1 through 3,” Lillard said. “He really takes the challenge on the defensive end.”

Afflalo isn’t Tony Allen, but he’s solid, and Portland’s top-five defense won’t crumble with him averaging more than 30 minutes a night. He occasionally gets tangled in screens, letting his man free for a pull-up jumper or spot-up shot. But more often than not, he’s a slippery eel, avoiding picks and blowing up the offense’s primary objective — as he does here to the Clippers and J.J. Redick.

The Western Conference playoffs are going to resemble the booby-trapped Peruvian temple in Raiders of the Lost Ark, and emerging in one piece will require favorable matchups, all-systems-go execution, and a few sprigs of luck. For much of this season, the Trail Blazers were as capable of winning the title as anybody.

They play beautiful team basketball, are well nuanced in the benefit of running a system that’s heavily influenced by analytics, and, most important, boast a top-10 offense and top-five defense. Throw in Aldridge’s decision to hold off on thumb surgery and Lillard’s tantalizing offensive development (he scores in the paint now!), and Portland sort of felt like a team of destiny.

Then a phantom blade struck Matthews’s heel, and the most infamously injury-prone franchise in NBA history sadly added another casualty to its cursed list. (Bill Walton, Sam Bowie, Greg Oden, and Brandon Roy, just to name a few.) But Afflalo’s timely addition gives the city a tiny speck of hope it otherwise wouldn’t have.

And in so many ways, the rest of his career will be altered by how he plays over the next few months. So, in other words, no pressure.