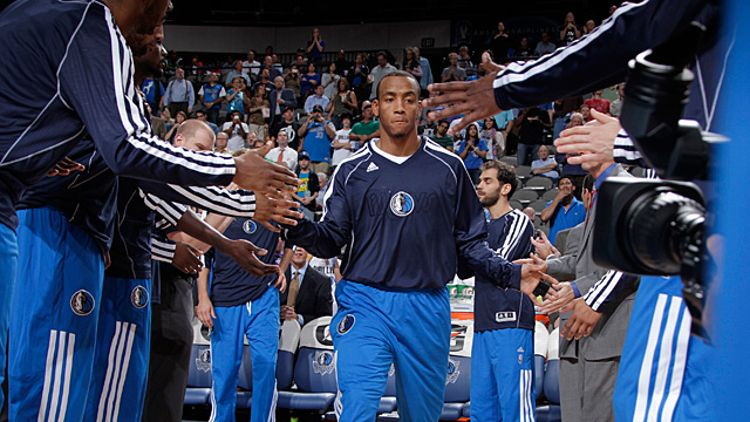 Yesterday we looked at ShotScore, a new method to identify the NBA’s best scorers. You can read the full piece here, but in a nutshell, the method compares the actual point yield of an individual NBA shooter against an estimated tally of what an average NBA shooter would accrue from that exact same set of shots. This is a useful way to evaluate shooting because unlike field goal percentage, it accounts for where on the floor the shooter is most active and factors that in to the analysis. Midrange shooters are compared against the NBA’s average midrange production, etc.

Players like Stephen Curry, LeBron James, Kevin Durant, Jose Calderon, and Kyle Korver immediately rose to the top; these players consistently outperform league averages from their most active shooting zones. But, it’s also instructive to identify the players who make shots at rates much lower than league averages, the guys that regularly underperform relative to their shooting cohort. Here is the bottom five:

These five players are all relatively active shooters, but fail to accrue points from the field at average NBA rates in their most active zones. In other words, each player struggles in his own unique way.

You could make a good roommates sitcom about a European perfectionist, forced to work alongside a purely American free spirit who “doesn’t play by the rules.” Or you could just watch the Mavs this season. It will be fascinating to see Ellis play on a team led by Dirk Nowitizki. But it might even be more interesting to watch his backcourt interactions with Jose Calderon.

Calderon and Ellis are two of the most noteworthy shooters in the league, but for very different reasons. Basically, Calderon is a great shooter, and Ellis is not. Calderon is particularly lethal in front of the basket. 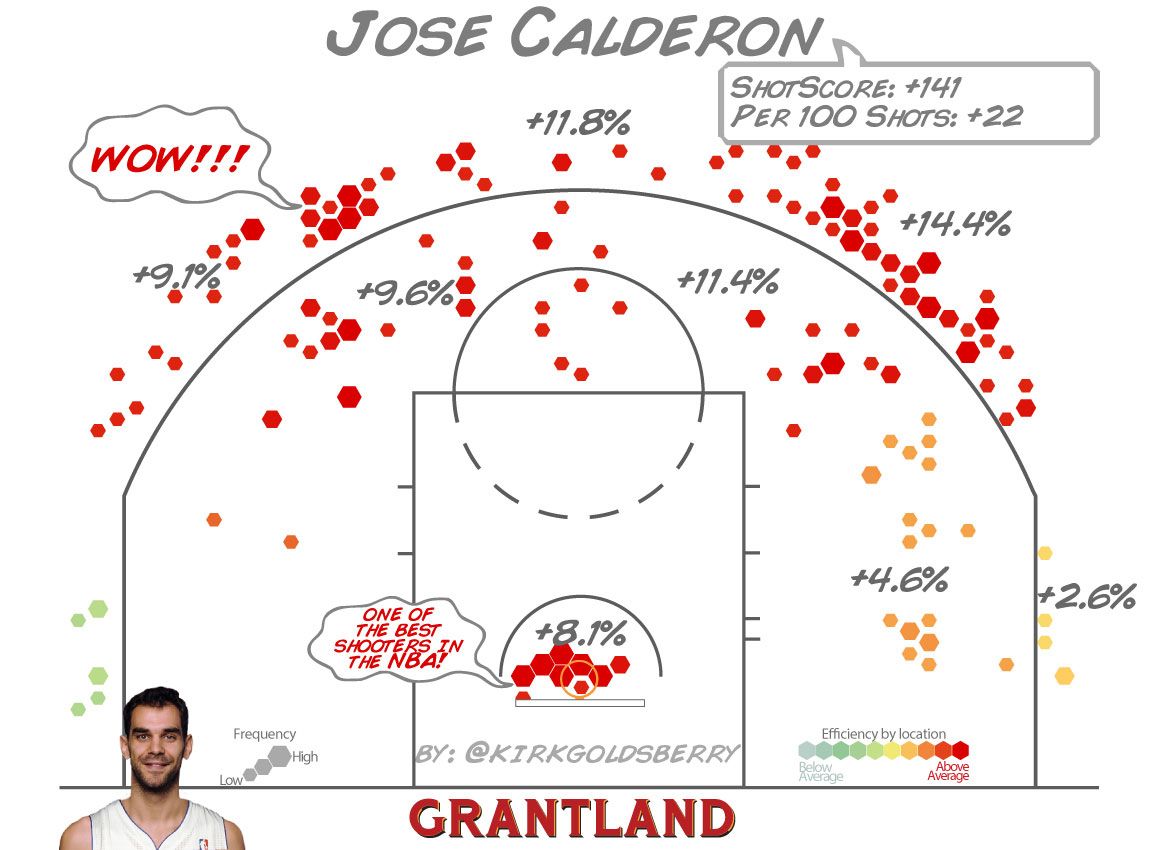 On the other hand, Ellis is a very creative player with a knack for getting a shot pretty much whenever he wants. This is an overlooked skill in most player evaluations. Ellis’s problems begin the moment his shots leave his fingertips. Simply put, he’s a below-average shooter with a volume problem. The combination of his high activity and his terrible efficiency has frustrated fans from Oakland to Oshkosh, and this year he brings his game to Dallas. 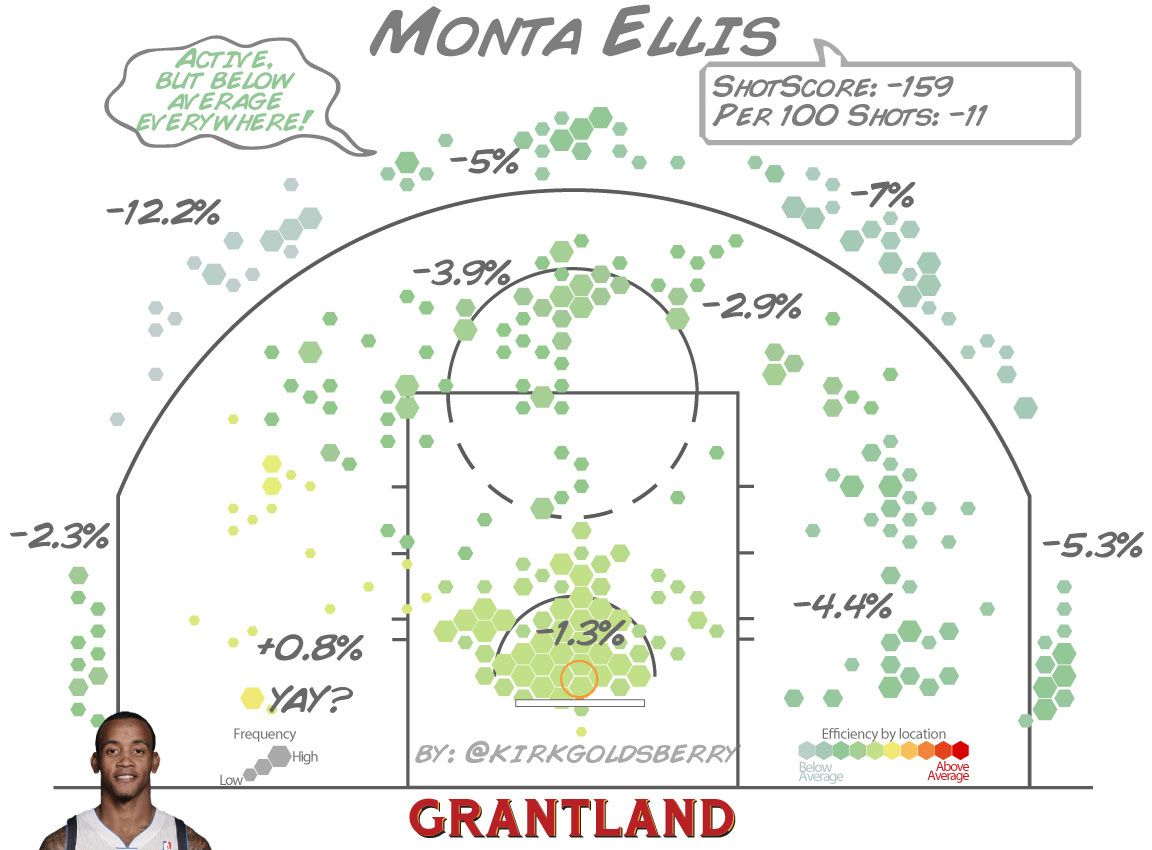 Ellis shoots below league averages from everywhere, except for one tiny baseline area where he’s hardly active. But that actually might be the key to his improvement. If Rick Carlisle can reduce Ellis’s activity and get him to more effectively pick his spots, Ellis has a tremendous chance of improving. He has never really played in a good system with decent offensive teammates. Playing alongside savvy veteran scorers like Nowitzki, Shawn Marion, and Vince Carter should help. If that team intelligence and Calderon’s shot discretion rub off on Ellis, there’s a very good chance we will witness a drastic upswing in his efficiency.

Either way, this odd couple in Dallas will make for must-watch League Pass TV this season. Signing him was a risk, but in the same way that Nowitzki and Calderon know about shooting effectiveness, that modern-day Texas tycoon, Mark Cuban, knows a thing or two about investment effectiveness. Let’s hope it doesn’t turn into a soap opera.

On Rondo, Russell, and Rubio

Even though we love to blast Rajon Rondo because “he can’t shoot,” there are a few point guards more deserving of that rep, prominent floor generals who actually fail to create points at above-average rates, from both the inside and the outside. Rondo, believe it or not, can actually makes shots at rates above league averages. In fact, in the last few seasons, he has made his elbow jumper at elite rates, partly because he’s left open and partly because he is an improving shooter.

Russell Westbrook is one of the most polarizing players in the league. Although most of us love him, the jury is still out on just how effective of a teammate he is. He’s obviously a great playmaker, but he has a tendency to shoot a little too frequently, which in some cases takes away more efficient options from his teammates (one in particular). As a scorer, Westbrook could improve his efficiency by learning from one of his biggest rivals.

Back in the 2002-03 season, a young Tony Parker attempted 243 3-point shots; a decade later, during the 2012-13 season, Parker only shot 68 3s. Parker and the Spurs recognized that not only were these shots not very effective (31.3 percent for his career), they also introduced a huge opportunity cost. Every time Parker shot a 3, it meant he wasn’t attacking or playmaking. The new and improved Tony Parker doesn’t take those 3s himself, he helps create them for guys like Danny Green, Kawhi Leonard, and Matt Bonner.

There’s no doubt that defenses secretly love when Westbrook shoots from long range; he’s not very efficient, and it means he is not shredding through defenders, attacking, and dishing to open teammates. The fact that Westbrook attempted 300 3s last season is troubling — this was up from 196 the year before, plus he only made 32 percent of them. It’s really hard to justify this level of activity. Westbrook is much better suited on the basket side of the 3-point line, pulling up from the elbow, driving to the hoop, drawing fouls, and distributing the ball. 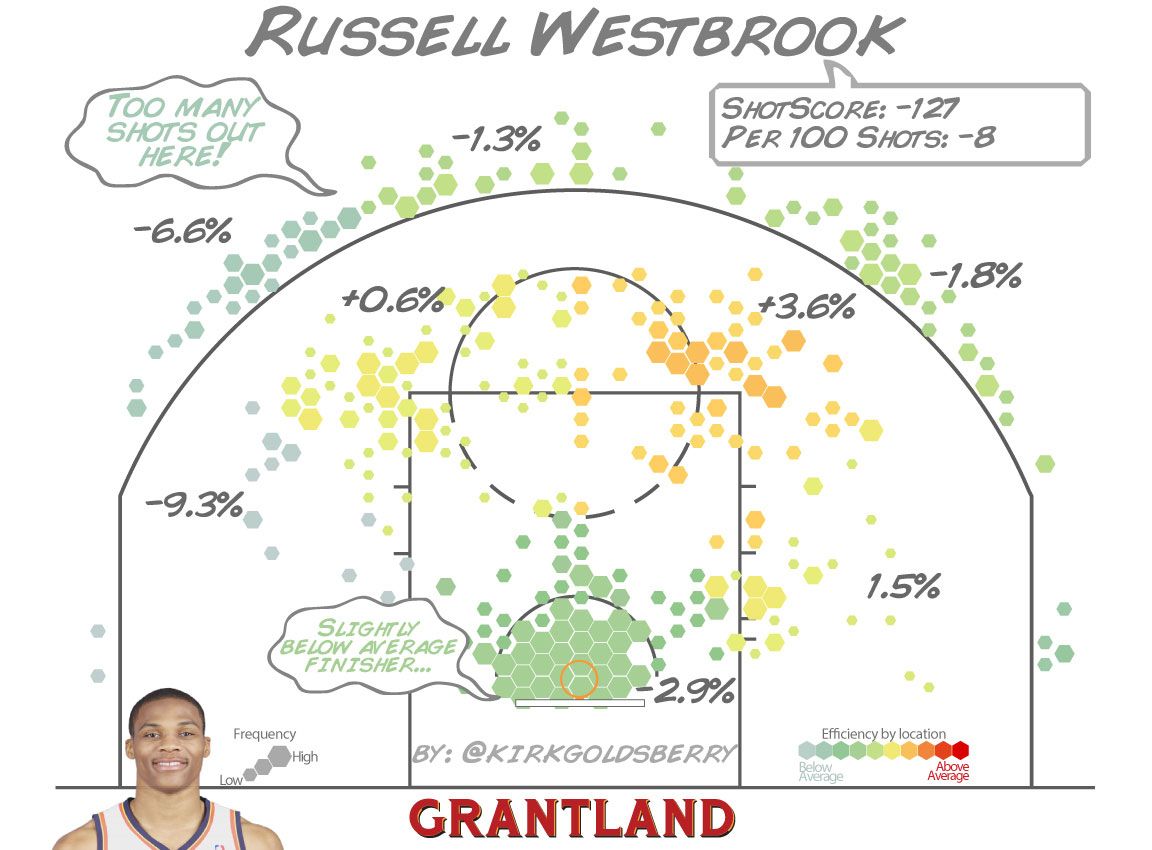 The good news is that in the same way that Peyton Manning and Tom Brady can be great without being great runners, it is possible to be a great NBA point guard without being a great shooter. In fact, Westbrook and Derrick Rose, two of the world’s best point guards, prove this on a regular basis. Still, Westbrook’s game, as great as it already is, could improve if he just stopped shooting all those 3s. Unfortunately, this season may not be the best time for him to stop. The loss of Kevin Martin has left the Thunder in dire need of replacement production from beyond the arc. We need to get Westbrook a Matt Bonner for Christmas.

Another point guard with limited perimeter passing options is Charlotte’s Ramon Sessions. He is a wannabe attack guard who has the speed and skill to maneuver through NBA defenses, but has trouble finishing at the basket. 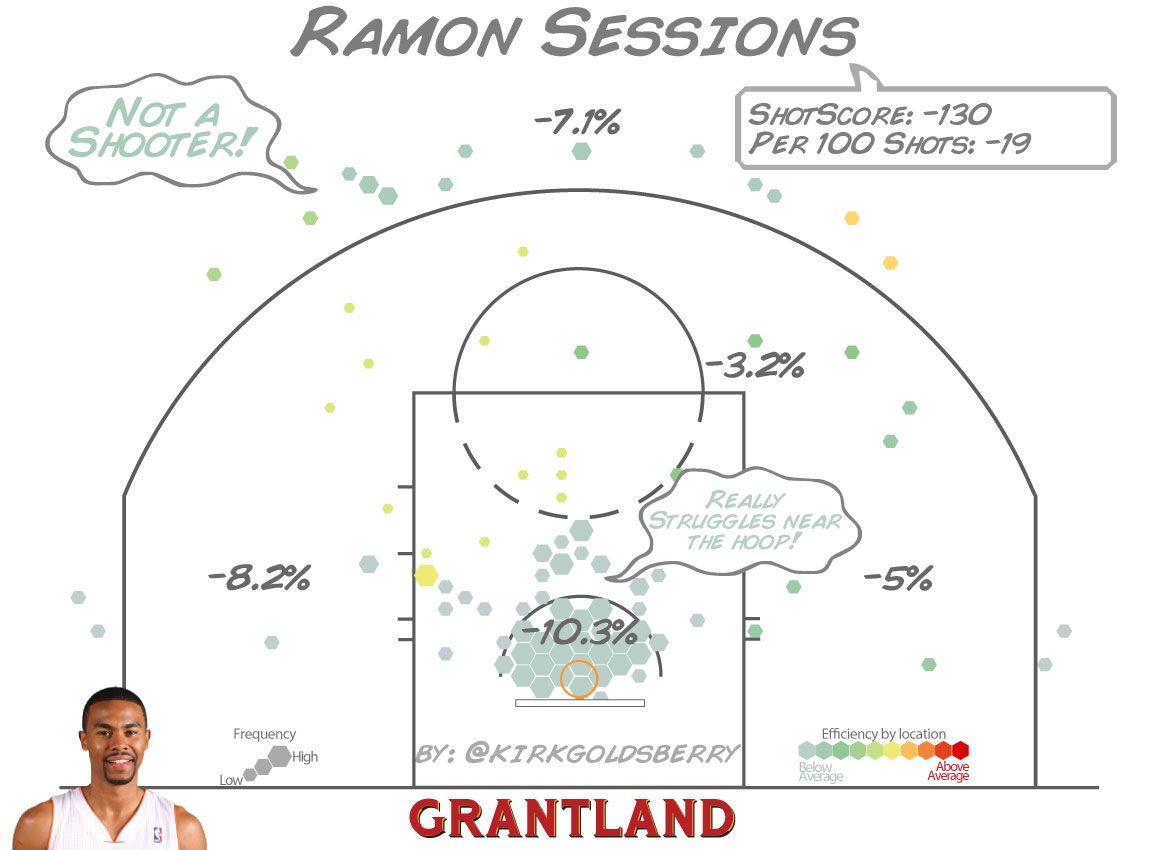 Although he gets a lot of opportunities at the rim, Sessions converts less than half of them. He also struggles as a jump shooter, but to his credit, if his relative inactivity out there is any kind of clue, he seems aware of this limitation.

In a way, Sessions is really similar to Ricky Rubio. Like Sessions, Rubio’s troubles are most extreme closest to the basket. He made a dismal 41 percent of his shots inside 7.5 feet last season, which was tied for worst in the NBA (with Austin Rivers and Randy Foye). 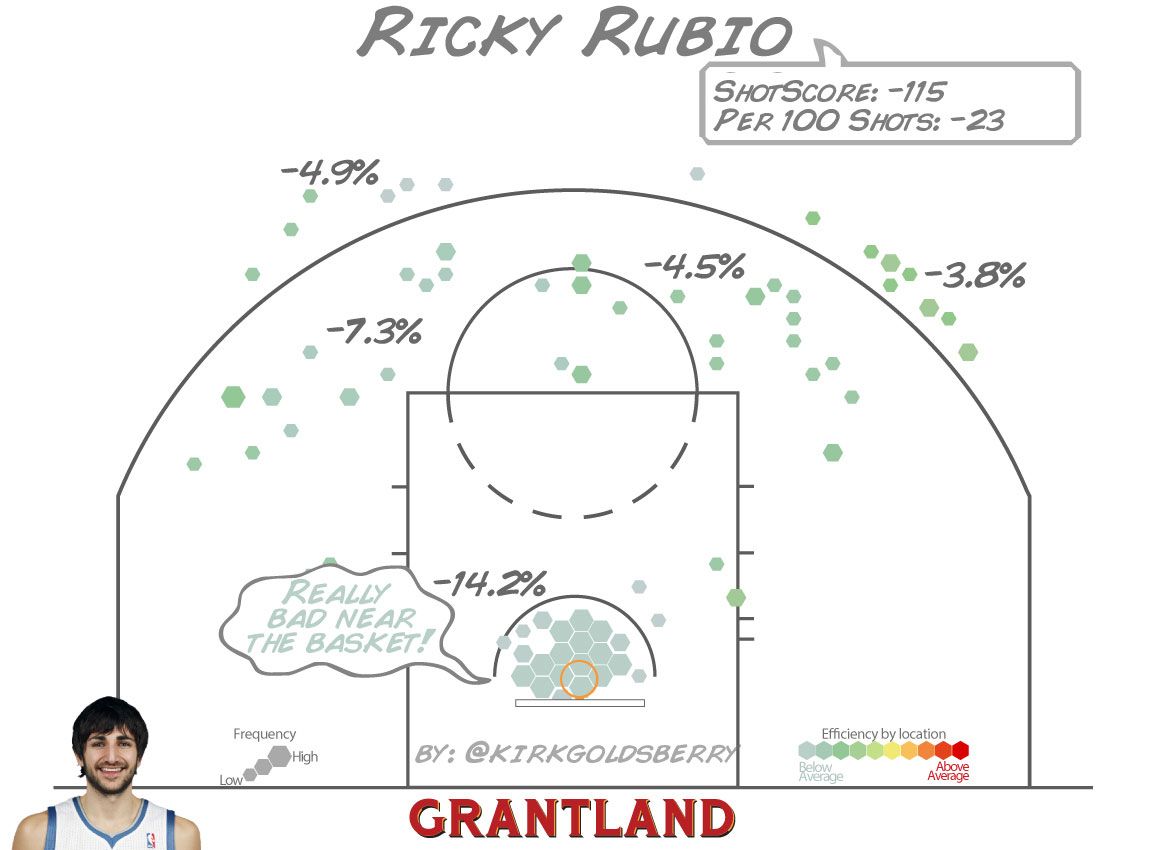 Saying that Rubio has trouble finishing at the rim is kind of like saying that Toonces the cat has trouble driving on mountain roads. But Rubio’s troubles extend outward from the hoop. As it turns out, not all Spanish point guards are freakishly good shooters. When it comes to shooting efficiency, Rubio is no Calderon. Rubio’s pretty lousy in those exact same elbow areas where Calderon thrives, and Rondo has greatly improved. So, to the people that continue to make those “Rondo can’t shoot” proclamations, I propose you take your sneers elsewhere, perhaps to Oklahoma, North Carolina, or Minnesota.

Speaking of troubles near the basket, the Pistons’ Greg Monroe presents another interesting example. Monroe was by far the NBA’s most active shooter near the basket last year. That’s good, except that he struggled to convert his shots down there. He has never met a close-range shot he doesn’t like. This is compounded by his immature midrange game. Although Monroe’s interior numbers weren’t terrible, his slightly below-average production combined with his extreme volume resulted in him arriving at the bottom of the ShotScore list. 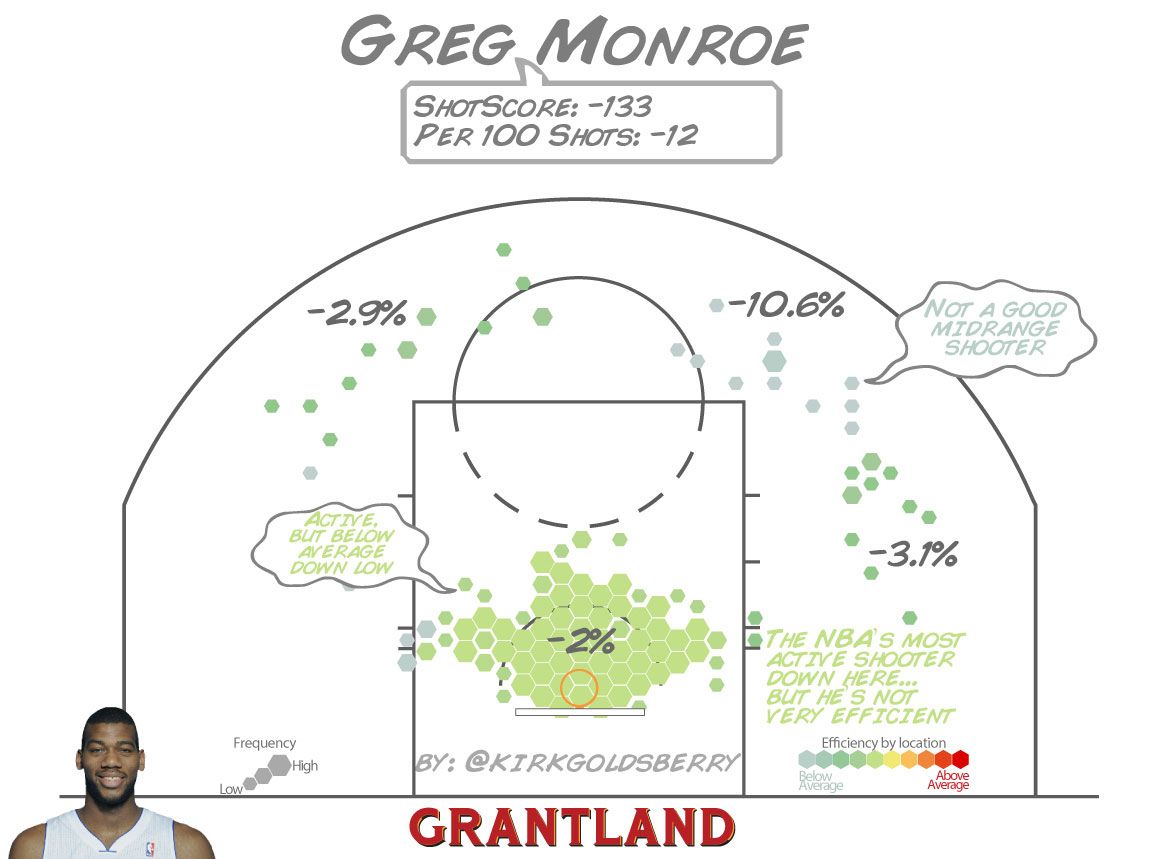 Despite his troubles last season, Monroe remains a very strong NBA prospect. With Monroe, Andre Drummond, and Josh Smith the Pistons seem well positioned to dominate the interior for years to come. There is little doubt that Monroe will improve both close to the basket and away from it as his game matures, but as it stands, he is notable for his inefficiency.

None of these players are bad basketball players; in fact most of them are really good even compared to their NBA peers. When it comes to shooting efficiency, however, each of these players has an important issue or two to address.