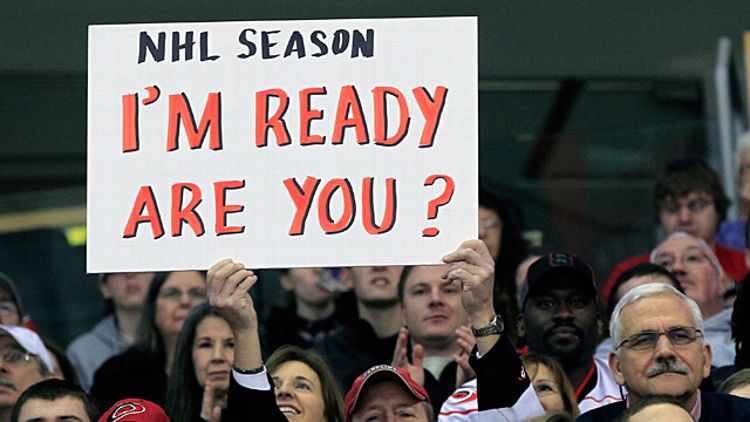 The NHL lockout is finally, mercifully over. And the agreement couldn’t have come soon enough for the league, given that losing another full season would have inevitably resulted in a sharply reduced fan base along with drastic drops in attendance, merchandise sales, and TV ratings.

Oh, not because of the decreased enthusiasm from fans worn out by the third lockout in a generation. The NHL’s problem would have actually been much simpler than that: If this lockout had dragged on even a few days longer, NHL fans were all going to murder each other. Whether it’s the guy on the next bar stool, your favorite blogger, the coworker one cubicle down, or just some random guy on Twitter, virtually everyone in the hockey world has been completely insufferable for months.

There were still a few holdouts, patiently dispensing their well-reasoned yet respectful points of view and appropriately nuanced opinions on complex topics. Roughly six of them, at last count. They were rumored to be holed up in an undisclosed location, trying to fight off the approaching hordes. They may not even know the lockout is over.

But the rest of us were awful and getting worse by the day. By the time the two sides finally made a deal, every one of us had ended up becoming at least one of the following 10 horrible people we met during the NHL lockout:

The NHL could only lock out its players for the third time in 20 years because they assumed the fans would come back. But what if they didn’t come back … EVER? [Ominous thunder.] Or at least for the first few games or so. Or maybe just the first period. Look, we haven’t quite worked out the details yet.

The Boycotter thinks he is the NHL’s worst nightmare. And he’d have been right if only everyone would have just signed the petition or watched this YouTube video or liked that Facebook page and, oh, hey, by the way, any chance he could he get an RT?

Look, The Boycotter’s heart was in the right place. He was mad as hell, and because he missed a memo about how this generation handles being mad about something, he decided to try to actually do something about it. It was adorable, really. But it was also hopeless. Yes, fans will have less interest in NHL hockey, and that should translate to the attendance numbers, but they won’t make some sort of en masse statement, because that’s not how hockey fans work. The Boycotter was always so doomed to such utterly embarrassing and predictable failure that he should have just started wearing a Maple Leafs goaltender mask.

The NHL negotiations were a long and bumpy road, and hockey fans hung on every twist and turn. What chumps! Luckily, The Master Negotiator was there to remind you that it’s just how this stuff goes, you guys!

Bill Daly claims the league’s most recent offer will be its last? Negotiating! Donald Fehr vaguely threatens ominous legal action? Classic negotiating! The two sides refuse to even acknowledge each other for weeks at a time? Negotiating 101, man. Gary Bettman just charged into a session, naked and wielding a samurai sword? Guys, seriously, have you never negotiated anything before?

In case you’re wondering, The Master Negotiator knows all of this because he once bought a used Honda Civic and spent three weeks talking the salesman down by $50.

Lockout? What lockout? Was there some sort of hockey lockout going on that you foolish peons actually paid attention to? Because if so, it was news to The Checkout Aisle. He couldn’t be bothered to care about any of this, and couldn’t understand why anyone else would, because he is just better than you. Caring about things is for chumps.

And in case you were wondering what other obscure sports and/or alternate levels of organized hockey The Checkout Aisle was following instead of the NHL, don’t worry. He told you. Constantly.

The One Who Kept Making “Disclaimer of Interest” Jokes

The NHLPA voted to disclaim interest? That’s funny, I disclaimed interest in this lockout a long time ago! Because “disclaim interest” kind of means the same thing as “lose interest.” And I’m less interested in hockey now. It’s a pun! Sort of. [Tumbleweed blows by.]

Every single person in the hockey world made this joke at least once, and by “at least once” we mean “nonstop for the last three weeks in a row.”

Oh, and speaking of Disclaimer of Interest …

The One Who Pretended to Understand What “Disclaimer of Interest” Meant

Fun fact: Nobody ever understood what disclaimer of interest actually meant. That includes Donald Fehr, by the way.

(Other things that everybody in the hockey world only pretends to understand: make whole; capped escrow payments; the continued presence of an NHL team in Phoenix; whether George Parros’s mustache is supposed to be ironic; how a commissioner who implements a loser-point system that lets almost every team in the league finish over .500 could suddenly get all righteous about the sanctity of splitting things 50-50.)

No matter what was happening, this guy insisted that everyone was equally at fault. If you expressed an opinion about anything that the league or players have done, The Equivocator would instantly appear, reminding you that both sides are always exactly the same, so there’s no point even talking about this.

After all, this was just a billion-dollar industry undergoing an entirely self-inflicted implosion over several months in front of a dumbfounded public — it was certainly no time to start assigning blame!

You could always quickly spot The Equivocator by his inability to utter more than three sentences without dismissively using the phrase “millionaires vs. billionaires.”

If something important happened last night, you could count on Mr. Hindsight to predict it with stunning, 100 percent accuracy by sometime the next morning.

Oh, you didn’t know things were going to happen that way? I mean, it was just so obvious, you really couldn’t have believed otherwise unless you are very stupid, which apparently you are. Mr. Hindsight saw it coming. And it goes without saying that he would have totally made this very obvious prediction yesterday, except he was busy lecturing people for being surprised by things that happened 48 hours ago.

If Mr. Hindsight really wanted to up his game, he’d deliver his pronouncements in the style of his spiritual cousin …

Fun fact: There is not a sentence that’s ever been uttered in human history that could have had the word “Folks” added onto the beginning without making you want to punch the speaker in the face.

Go ahead and try it:

“Folks, that’s one small step for man, one giant leap for mankind.”
“Folks, I now pronounce you man and wife!”
“Folks, do you believe in miracles?”
“Folks, I’m Gandhi and this is something Gandhi would say.” (Note to self: Google some Gandhi quotes before submitting this post.)

Every once in a great while during these negotiations, an issue emerged in which the right answer was so indisputably obvious that even NHL fans managed to stop yelling at each other long enough to come to a consensus. That’s when The Contrarian stuck his finger in the air, figured out which way the wind was blowing, and then loudly announced that everyone else was wrong.

Gary Bettman is the worst commissioner in sports? No, he’s the best! Donald Fehr almost ruined baseball in 1994? No, he saved it! Ice is cold? No, hot! Steve Fehr’s sweater is embarrassingly awful? No, it’s only sort of kind of awful if you squint at it from a certain angle and, OK, maybe you have me on that one but still!

Seriously, The Contrarian is the worst. He’s the kid who could only ever get attention from his parents by peeing into their breakfast nook.

Worst of all, if you tried to tell The Contrarian that his schtick was annoyingly simplistic and everyone hated him for it, he’d instinctively inform you that no, everyone actually loved him. At this point you were legally allowed to push him under a Zamboni.

Don’t get me wrong, the lockout has produced some fantastic memes. From ass mode to the podium to #dregerface to Harrison Mooney’s hypnotic tummy, random Internet memes created some rare moments of comic relief for exasperated hockey fans.

But an unfortunate side effect of this phenomenon is that some hockey fans lost the ability to communicate in any other manner. They could only speak in memes, and they could only express especially complex thoughts by combining those memes with other memes. “Wait, what if Dreger made the face behind a podium while wearing an #assmode shirt, guys? Guys? [Long pause.] Kyle Wellwood is fat!”

If not treated quickly, The Meme Addict eventually collapsed in upon himself, forming a singularity from which nothing even remotely resembling humor could ever hope to escape. At that point he started running a hockey-themed Wonka account.

The Hardcourt Shuffle: Duke and Michigan Rise From the Pack