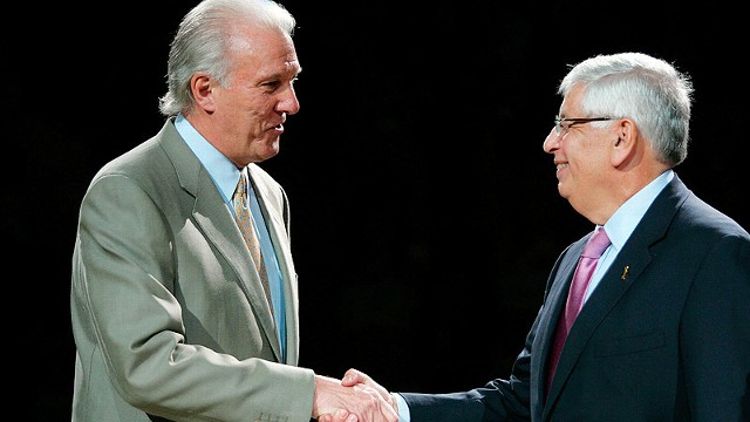 There are at least three competing incentives at work in David Stern’s pending punishment of the Spurs for resting Tony Parker, Tim Duncan, Manu Ginobili, and Danny Green on Thursday in Miami — a punishment that will surely top out at a fine, since any non-monetary penalty would be ridiculous.

1. The Spurs’ incentive to win a title. There is no proof Gregg Popovich’s long-standing practice of giving his key cogs an occasional night off furthers this goal, and as Kevin Pelton of Basketball Prospectus put it late last night, Popovich’s general night-to-night minutes management likely has a far larger impact than these total off nights on the relative spryness of his old folks come May and June. Learning semi-definitive things about health, fatigue, and injuries is the next frontier in sports research, and we are about 5 percent of the way there. It’s impossible to prove that the off nights help or somehow hurt San Antonio’s long-term fatigue prognosis, but there is evidence that overplaying guys in the regular season can hurt a team’s title chances. The information is murky on all fronts, but it’s hard to blame Popovich for trying anything he and the team’s very smart staff believe might give the Spurs a half-percent greater chance of winning a fifth ring.

In the most obvious sense, every game missed is a game in which a player cannot suffer a freak injury, as Ginobili did early last season and in San Antonio’s regular-season finale in 2010-11. That game wasn’t entirely meaningless, since San Antonio entered the day tied with Chicago for the league’s best overall record, but it’s possible Ginobili’s injury has made Popovich more paranoid than he was before.

2. The league’s incentive to please TV partners, ticket buyers, fans, and 28 other teams who stand to suffer or benefit in a small way from the Spurs (in theory, considering last night’s fun performance) turning a toss-up game into a likely loss.

3. The league’s incentive to prevent tanking. An elite team sitting guys with the postseason in mind is miles away from what Golden State and Charlotte — and lots of others before them, including at least two of the key participants in the Duncan lottery race — did last season in chasing draft pick odds. But in a very broad sense, they represent the same thing: a team willingly decreasing its chances of winning a particular game, or series of games, in exchange for some non-guaranteed long-term benefit. The outcry over the Bobcats and Warriors stung the NBA; there is likely some (small) relationship between that sting and Stern’s overreaction to what Popovich did Thursday. Popovich’s brazenness probably also irked Stern; he chose a national TV game, as we’ll get to below, and sent the stars home on a commercial flight before the team even arrived at the arena. Popovich has had his stars attend rest games in the past.

Let’s leave incentive no. 3 alone for now. Tanking is a semi-real issue, but the league won’t solve it by fining the Spurs. They’ll solve it only by changing a draft structure that awards the highest picks — guys who will play on cheap rookie contracts in a league with new, tight financial restrictions — to teams who lose the most games. That’s an issue/moral debate for another day.

That leaves us with the first two incentives, and in a battle between those two very large issues, I’m siding with Popovich and his right to manage the Spurs as he and his colleagues see fit. This isn’t new, it hasn’t been limited to the Spurs, and with two bizarre exceptions from the mid-1980s and early 1990s, the league hasn’t punished teams for it. Adam Silver, the league’s commissioner-in-waiting, gave the late-season version of this practice his blessing last April, as teams began resting guys in preparation for the playoffs, per USA Today:

“Strategic resting of particular players on particular nights is within the discretion of the teams.”

It’s important to note that Silver was speaking toward the end of a lockout-shortened season featuring a compressed schedule and back-to-back-to-backs — a compression that had Popovich pulling this rest thing more than usual. That is one out Stern can use in changing course today. The stature of last night’s game as a stand-alone national TV clash of powerhouse teams might be another such out, but that doesn’t hold enough water on its own. (The league could relieve teams of this rest dilemma by playing fewer than 82 games, a move lots of folks hope Silver will at least research as commissioner.) There was a groundswell of sentiment Thursday that perhaps Popovich could have rested his three stars against Orlando or Washington in earlier road games this week, or that he might have staggered their rest days.

But those ticket-buying fans in Orlando or Washington would have suffered the same drop in fun level as Miami’s ticket buyers suffered last night. Those fans are no less valuable than fans of the defending champs; shifting the “loss” to them solves nothing. (Fans who attend in those cities might be more likely than the late-arriving Miami crowd to see Duncan’s first-quarter stint, anyway.) If you think the Spurs should have played their stars last night, you sort of have to be an absolutist on the issue. Those Orlando and Washington games also came in the middle of a long road trip, and not at the end of it, meaning sitting the stars then would not have given Popovich the chance to send them to San Antonio for an extra day of home-bound rest before a big Saturday division game against the Grizzlies.

The league’s national TV contract, worth about $930 million per season, is another issue. That contract accounts for nearly 25 percent of the league’s total basketball-related income, and TNT’s share makes up a hair less than half of that pot. The Spurs are part of a larger enterprise that earns billions in revenue largely because of television and fans. The league has some responsibility to take care of those people, and of the corporate sponsors who pay for TV ads, but I’m not sure a single nationally televised game really moves the dial. Ad buys are locked in long before Popovich makes his resting choices, and a slight decline in ratings for one or two NBA games is not going to have a real impact on ad prices amid a general rise in the NBA’s popularity.

Appearances matter, and so do angry sponsors. It’s not a black-or-white issue; it’s a balancing of interests, and considering all of those interests, the balance tilts San Antonio’s way.

Again: This is nothing new. San Antonio sat Duncan eight times last season and sat its trio of stars together three times, including an April 9 road game in Utah that had massive playoff implications for a Jazz team chasing the eighth seed. Ask Phoenix fans about that Utah win. Memphis rested Zach Randolph and Tony Allen in its second-to-last game in 2011, in a clear attempt to drop to no. 8 and draw San Antonio. The Grizzlies and Clippers had a furious tanking race in 2006 to drop from no. 5 to no. 6, avoid the no. 4-seed Mavericks, and get home court against Denver in the no. 3–vs.–no. 6 matchup. (All that silliness resulted in the league changing its seeding rules for the next season.) Evan Turner talked openly just last season of how Philadelphia wanted Chicago, and not Miami, in the first round.

The Mavs used strategic rest for Jason Kidd during his final two seasons there. And innocent late-season resting can still have major playoff consequences. The Cavaliers, locked into the no. 1 seed, rested all their key regulars for their 2009 finale against a Philly team battling Chicago for playoff positioning. Chicago players were left to watch helplessly on television as Wally Szczerbiak and Darnell Jackson played more than 40 minutes in a Cleveland loss. That game gave us the epic Boston-Chicago first-round series and cost the Cavs a chance to tie the 1985-86 Celtics’ best all-time 41-1 home record.

We could go on. It has been happening forever, with the league’s implicit and explicit permission, and there is little difference between those instances and what San Antonio did. The only difference involves national television and the early-season timing, though Popovich sat Duncan less than a month into last season in Houston in the second game of a back-to-back at the end of a four-games-in-five-nights stretch.

Given the precedent, Popovich’s right to manage his group of human players as he and they want overrides the league’s corporate interests here. The NBA and its media mostly subscribe to a macho “count the rings” credo that incentivizes — in very literal ways — teams to prioritize championships above all else. Championships get coaches the largest contracts and airtight job security. They get J.J. Barea $5 million per year. They get people into the Hall of Fame, and inspire glorious hagiographies and endless, all-consuming noise about heroism and “clutch” and legacy.

Popovich might be above all that now, having won four titles and permanent job security. He’s also far too smart to actually ascribe to the silly “clutch” and “count the rings” narratives that define much of NBA discourse. But he also wants that fifth ring, and it is his right to make any decision, big or small, that he believes will maximize his chances to get it. The NBA, its fans, and its media have created that incentive structure.

There is a bit of a slippery slope here, too, though not one that will really play out in life. There was a minor outburst of anti-Pop sentiment early in the 2010-11 season, when he pulled most of his key players from a game against New York with the Spurs down 11 (and Parker on the line for two free throws) and about 3:15 to go. The game was still very much in play, but Popovich understood the odds and opted for rest with the second end of a back-to-back looming. And just two days ago, Phoenix, in the middle of a long trip and on the second end of a back-to-back, essentially tossed in the towel midway through a 40-point loss in Detroit. Should we fine teams for that stuff, too?

It’s a little blurry, like all complex issues, but in the end, this should be the Spurs’ call without fear of penalty.