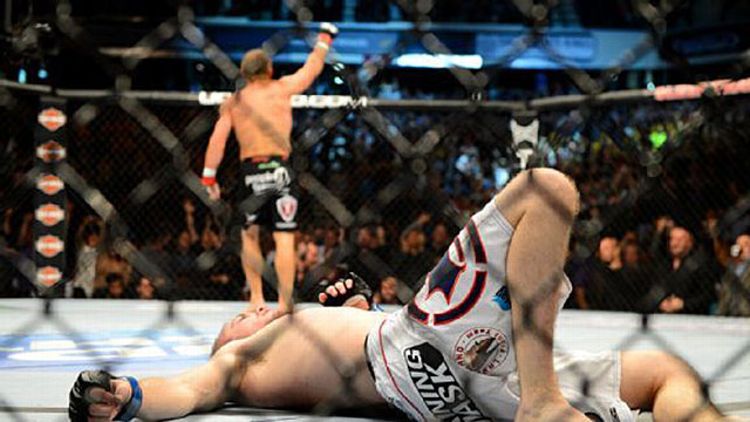 You have to rewind your memory bank to 2007 to remember the last UFC event held in Sacramento, a city that most resembles a remodeled basement. Even though MMA devotee Arnold Schwarzenegger vacated the governor’s mansion long ago, the triumphant return of UFC on Fox 9 to the California capital just makes you wonder why it took so long. Or maybe, speaking for indignant Sonics fans and smug Angelenos, why the hurry?

The Bay Area’s abundant training camps extend to surrounding suburbs and cities, creating a generous footprint for what we might consider “hometown” fighters. There’s the Scrap Pack, splitting time between San Francisco and Stockton (the Diaz Brothers, Shields, Melendez); there’s the American Kickboxing Academy in San Jose (Velasquez, Cormier, Fitch); Josh Koscheck’s Dethrone Basecamp in Fresno (Koscheck, help wanted, help wanted); and best of all, Sacramento’s Team Alpha Male, led by 34-year-old bantamweight Urijah Faber, a former WEC champion and one of the UFC’s most charismatic athletes. Blessed with a surfer’s charm, long sandy hair, and a Spicoli giggle, the man branded “The California Kid” lives, improbably, two hours from the nearest ocean; he is surrounded by swaths of farmland.

Even more improbable? The near-perfect record of Faber’s fight team in 2013. Helmed by head coach Duane “Bang” Ludwig, a UFC veteran and accomplished expert in Muay Thai, kickboxing, and Wiggles-themed clothing, Team Alpha Male has blended superb wrestling with tactical striking acumen. Add in cannabis-aided film study and the results suggest Ludwig isn’t just onto something, but on something. The decision to hire Ludwig seems as savvy as every pink slip ever handed to Norv Turner. But can we be certain the former electrician turned professor of Bangology is truly affecting outcomes?

Reed Kuhn from Fightnomics believes so. Heading into UFC on Fox 9, Kuhn examined the combined post-Ludwig record of Faber, Chad Mendes, Joseph Benavidez, Danny Castillo, and T.J. Dillashaw — an astonishing 13-1 — and found a substantial rise in KO/TKO finish rates, as well as vast improvement in a host of striking metrics from accuracy to knockdowns. And the development of stand-up prowess appears to have a positive effect on wrestling metrics as well.

Having four Team Alpha Male fighters definitely boosted the appeal of the UFC on Fox 9 card, which needed the help after so much continuous reconstruction: Lightweight champion Anthony Pettis suffered a knee injury, nixing his featured title defense against Josh Thompson (who replaced TJ Grant). But the wreckage spread well beyond the original marquee. Even after Ian McCall, John Dodson, Jamie Varner, Kelvin Gastelum, and John Moraga were all replaced, a late injury to Matt Brown (herniated discs) left Carlos Condit and ticket holders without a substitute and a shortened card. The Demetrious Johnson–Joseph Benavidez flyweight title rematch (originally scheduled for November 30) ended up the main event.

The good news? The event’s eighth casualty linked perfectly with a vintage Sacramento-based television drama and fan sentiment toward the utmost limit of permissible injuries.

Lightweight Danny Castillo was the first TAM fighter to step foot in the Octagon, doing so as a 3-to-1 underdog. That’s why the hometown crowd became electrified when Castillo connected with a stunning right hand that floored Edson Barboza. With Barboza in survival mode, Dana White impulsively tweeted, “HOLY SHIT, who saw this coming!?” Unable to tweet back, “Not me!” the Brazilian stayed busy escaping two choke holds while defending against Castillo’s persistent attempts to finish him in Round 1. According to FightMetric, Castillo edged Barboza 41 to 5 in significant strikes, yet convinced just one judge and a high-level UFC executive to score the round a 10-8. It was a shortfall that would ultimately spoil a draw. A reinvigorated Barboza controlled the final two rounds by punishing the former Menlo College wrestler’s body with an assortment of thunderous leg kicks, taking a majority decision victory.

It didn’t take long for TAM to get back into the winning column. Riding four consecutive knockout victories, featherweight contender Chad “Money” Mendes entered the fight unimpressed by Minnesotan Nik Lentz’s spiffy bow tie and three-fight unbeaten streak. Mendes’s seven unanswered takedowns proved the difference in a unanimous decision victory. Mendes later admited he was struggling with an illness after showing uncharacteristic fatigue. Lentz accepted the loss, but was undoubtedly annoyed at having come into contact with a cold virus.

With the best matches coming, Sacramento was primed to raise the roof until Michael “Mayday” McDonald’s entrance music derailed momentum. You don’t transport 11,000 MMA fans to a religious revival without changing the vibe. It wasn’t quite David Spade and Chris Farley in Tommy Boy, but people were secretly into it. That is, until Faber and Dr. Dre snapped the trance with another legendary entrance.

Backed by a chorus of “Let’s go, Faber!” chants, the California Kid looked at ease against the 22-year-old McDonald, whose prostate density made for a difficult weight cut. In the second round, Faber’s continuous pursuit paid off with a crushing right hand. Transitioning into hyena mode, Faber attacked McDonald along the fence and ground before a guillotine choke forced the ex–Doobie Brother to tap. So much for the power of celibacy.

Sacramento’s deafening cheers would peak with Faber’s Submission of the Night. Just over two minutes into the main event, Demetrious “Mighty Mouse” Johnson once again thwarted TAM’s quest for a championship by knocking out Joseph Benavidez. He was the first person ever to do so. It was Johnson’s third consecutive flyweight title defense and his first Knockout of the Night bonus. Benavidez later tweeted, “That didn’t go as planned. Just wish I could have put on a better fight.” The loss dropped TAM to 2-2 for the night, definitely squandering a little of the “Bang” mystique, even as Faber gained momentum for a title shot. In 2014, his teammate Mendes will probably get TAM’s next chance at a belt. As for “Last Call” Castillo, any brush with victory is disappointing, but his $50,000 Fight of the Night bonus goes a long way toward buying prosthetic legs and a new solar plexus.

At the postfight press conference, Chad Mendes’s comments were both inclusive and sympathetic. After complimenting Lentz on his toughness, he was quick to praise Faber’s performance and acknowledge the disappointment of his vanquished teammates. “It sucks for Joe, and it sucks for Danny, but we just go back to the drawing board,” he said. “It’s been a hell of a year for Team Alpha Male. We still got Duane here. We’re making huge improvements, and I’m excited to see what’s next.”

Grantland’s Bill Simmons recently tweeted, “Sacramento is a Rondo trade away from being legitimately fun.” Maybe that’s true for basketball fans, but for those following Team Alpha Male, the fun is just beginning.