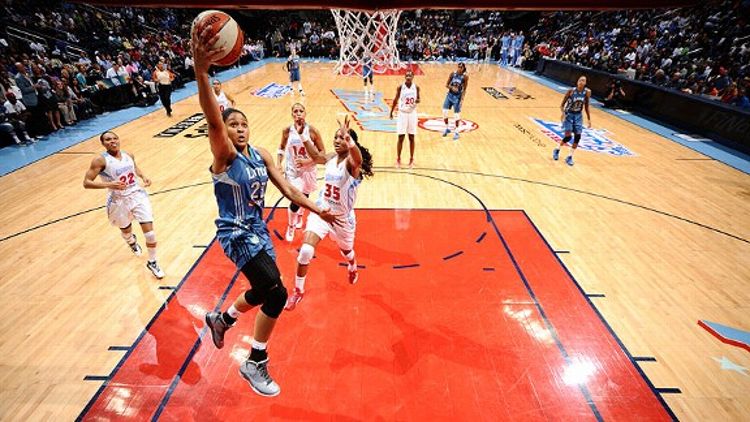 The Minnesota Lynx beat the Atlanta Dream on Friday to claim the organization’s first WNBA championship. The 15th WNBA season, in the books. So now what? While this assuredly isn’t true for all of the players, I’m assuming some members of the Dream and Lynx will join the rest of us in what could be a long fall … and winter … and spring full of non-stop banter about the NBA lockout and the present and future condition of the fractured league.

Fortunately for the players of the WNBA, there is another option. An option that not only keeps these talents on the hardwood, but also irreversibly transforms the league from something that is oft overlooked to to a profitable, wildly popular enterprise.

Run the season back. Immediately.

On the surface, this idea sounds insane, but let me assure you that 1) it is very sane, 2) it is very doable, 3) will save the WNBA.

First off, the facts:

If, on Nov. 1, the WNBA started up a special season 15½, the playoffs would conclude in April and then the already scheduled Season 16 would start up without conflict in May 2012.

Not convinced at all, are you? I’ll keep going.

Back-to-back seasons for the WNBA sounds outrageous for the players, but think about this: Two WNBA seasons are only 68 games. That’s still 14 games less than one full NBA season. As a league that’s actively trying to create legitimacy for itself, there’s nothing more hardcore than canceling your vacation to work. The divas in the NBA (or any other men’s league) would never do that. If the WNBA did, though, it might slowly bring some of these drama queens back to earth.

If I was a WNBA player, I would jump at this idea. Real hoopers love basketball and if I was someone like Seimone Augustus, I’d scoff at the fact that I only got to play 34 games as a professional. To put that in more perspective, that’s only three times as many games as my NYC intermural basketball league. If the Augusti and the Taurasis and the Catchings of the WNBA were into the idea, the rest of the league would follow suit in a matter of minutes.

Earlier I mentioned that this idea was 1) sane, 2) doable, and 3) would save the WNBA. I’ve addressed the first two, but the third one is the kicker. This 15½ campaign would not be like past WNBA seasons. Not in the slightest bit. What would transpire between November and April would be unlike any other WNBA season and in a matter of months, this sport would go from relative obscurity to extreme popularity. Here’s how it would go down:

November:
Word has gotten out that the WNBA is running back the season, but no one really cares much. Fans are just beginning to accept the reality of the NBA lockout, and NBA players are starting to figure out how to spend their winter. Some already have long-term commitments (Kenyon Martin — China; Delonte West — Regency Furniture Showrooms, Stephen Jackson — The Rap Game) but for the others, the plan will undoubtedly be hanging out, enjoying their freedom, and trying not to spend all of their money and/or get locked up.

Dec. 3:
The Phoenix Mercury have a home game. Seeing a great opportunity for a family outing, Suns forward Grant Hill takes wife Tamia and the kids out to the game. In the first quarter, guard Diana Taurasi scores 20 points. Grant is impressed. He tweets: “@realgranthill33: Hey Vinsanity — watch out, Taurasi is coming for your spot. She’s got 20 points in the first quarter”. Instantly retweeted by @JChillin, @Thirty2zero, and @eegabeeva88. Steve Nash sees tweet, gets off the phone with Nas, and sends out his own: “@stevenash: Someone drive me to the Mercury game right now. Got to see @mrvincecarter15 get clowned in person. I drunk.” 100+ Retweets with random people saying they’ll come pick him up. Ten minutes later: “@mrvincecarter15: I’m on my way”.

Taurasi has 32 by halftime and ends the game with 51, breaking her old WNBA record of 47. Once she comes out of the locker room, she is greeted by half of the Phoenix Suns team. Apparently someone told her about the Suns Twitter banter, because she brought out her Mercury game jersey, signed it, and tossed it in Vince’s face. FIRST OFFICIAL NBA/WNBA BEEF.

Dec. 5:
The Mercury face the Minnesota Lynx in another home game. The entire Suns team is there, sitting courtside. Twitter has been ablaze for the past two days about what went down with Taurasi vs. Vince. There’s a noticable bump in attendance. Members of the Suns are being interviewed by the press, fielding questions about how the WNBA can fill the basketball void during the lockout. During the game, the Mercury’s Taurasi and Candice Dupree and the Lynx’ Maya Moore and Augustus are battling. Whenever a killer crossover or an acrobatic move or a fadeaway three is made, the Suns are flipping out courtside. Between audible freakouts on the court, they take to Twitter (obviously) chronicling every awesome play. By halftime, “Diana Taurasi”, “Seimone Augustus”, and “#ThingsBetterThanVinceCarter” are all trending topics. In just three days, the WNBA has started to buzz like it hasn’t in it’s previous 15 seasons. Combined.

Dec. 9:
Steve Nash comes to the arena in a Mercury jersey. Steve Nash, Suns point guard, is wearing a WNBA jersey. In public. This is probably the strongest WNBA endorsement in league history.

The rest of December:
NBA players are consistently rocking WNBA jerseys to their corresponding WNBA teams’ games. Now Grantland contributor Kevin Love arrives at a Lynx game in a XXXXL Maya Moore jersey. Chauncey Billups, his wife, and three daughters show up at for a Liberty game at Madison Square Garden in a camo Essence Carson jerseys. Khlomar arrive to the Staples Center in Candice Parker jerseys. The phenomenon has officially spread beyond Phoenix.

Oh, and did I mention a crew of rappers from each city were going to make a track about each combo and perform it, on court, before the contest? Did I forget that?

February:
VH1 launches show called Basketball Husband, which has the simple, but shockingly effective plot. Cameras follow Sheldon Williams while he drops off and picks up laundry for his wife, L.A. Sparks center Candice Parker. He also is trying to start a band of other basketball husbands. It wins its timeslot for 10 consecutive weeks.

March:
VH1 launches a show called Basketball Husbands: The Band, which has the convoluted, but shockingly effective plot of watching Sheldon Williams audition musicians and judging them on their musical prowess and future ability to marry a WNBA player (the only requirements to be a “Basketball Husband”). It wins its timeslot for 10 consecutive weeks.

April:
WNBA Finals. New York vs. Los Angeles. Major market swag. Each game is televised in primetime. Practically the entire National Basketball Association is in attendance for either the West Coast or East Coast games. Many of the players that were abroad are back in the states and are eager to 1) see the women ball out and 2) get some long-awaited TV time. The games are highly competitive, highly aggressive, and highly skilled. After each game, the NBA players are applauding the WNBA players, who are excited that the guys are pumped to watch them play. The season ends with the Liberty’s miracle run taking them to the championship in five games. The most exciting season in WNBA history has officially come to a close.

And now, after 11 straight months of basketball, the WNBA players can relax. For a month, that is, until season 16 starts up. Yes, three straight seasons sounds insane, but 2012 is an Olympic year and in summer Olympic years, the WNBA takes a month-long break in the middle. So for a significant percentage of the league, rest and relaxation is on the horizon. As for the real hoopers, not so much, but as the old saying goes, “I’d rather an exhausted Urquelle than a well-rested Urkel.” So true.

Fair warning: for this scenario to play out exactly the way I predict it will, the WNBA has to turn its game up a notch. In Season 15½, there is no room for foolishness and malarkey. If I turn on the TV and see two airballs and three missed layups in the first six minutes, I’m hitting “last” on my remote and watching my Basketball Husbands marathon for the rest of the evening.