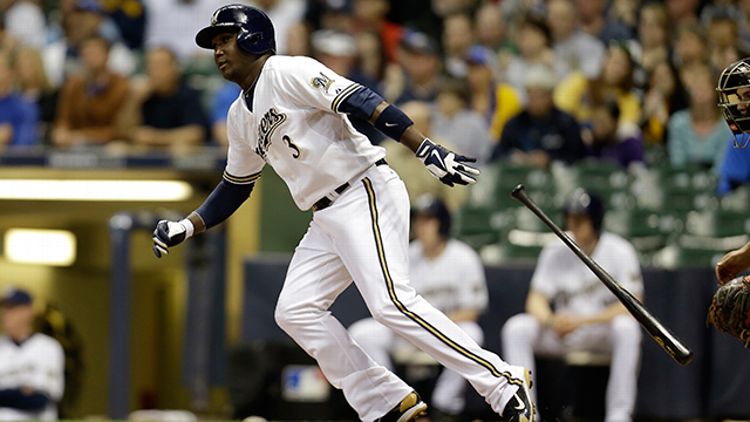 For as long as people have written words on the Internet, there’s been a baseball snarkiarchy. This devoted group of provocateurs has made a sport of mocking numerous players over the years. Often analytically inclined, they home in on a certain kind of player, prolific outmakers who get too much playing time, too much money, or both, because some team doesn’t recognize what an on-base percentage black hole can do to a lineup. For years, the snarkiarchy targeted Neifi Perez. Then it was Jeff Francoeur. And while Francoeur remains one of the biggest hackers and worst everyday players in the game, he may have ceded the throne as the baseball intelligentsia’s most mockable player to … Yuniesky Betancourt.

Here’s just a small sample of Yuni B snark-tweets that have cropped up since our man signed with the Brewers in late March:

I like how people are focusing on AJ Ellis hitting second as though “Yuniesky Betancourt, cleanup hitter” isn’t the biggest lineup news here.

The Brewers are going to use Yuniesky Betancourt at first base once A-Ram comes back. That sounds like a MARVELOUS idea.

Did you catch the running theme here? What started as a minor league signing of seemingly little consequence has turned into one of the best bargain pickups by any team in ages — at least so far. Betancourt went from providing a bit of depth when Aramis Ramirez joined Mat Gamel and Corey Hart on the DL to getting more consistent starts to hitting for some pop to batting cleanup to absolutely raking to now the Brewers need to find a way to leave him in the lineup.

Thing is, Betancourt’s not alone. A passel of lightly regarded players have surged to amazing starts this season. They range from power-hitting journeymen to out-of-nowhere rookies to pitchers who’ve spent a lifetime throwing batting practice only to suddenly put on their best Greg Maddux impersonation. That group’s performance has been incredible, in the literal sense of the word: impossible to believe. There’s a strong temptation to look at what these players have done, dismissively hand-wave it all away, and utter those three magic words: small sample size. Still, while skepticism is obviously advised when Yuni B and his ilk are setting the league on fire, maybe there’s more going on here. With that in mind, let’s break down five first-month Incredibles, and their chances for sustained success.

Betancourt is a prime example of real-life value diverging from fantasy value. In real life, here’s a replacement-level player, primarily because he never walks and plays miserable defense. In standard fantasy leagues, walks and defense obviously don’t count. Except, in a sense, they do. After six seasons as a more-or-less full-time player, Betancourt was relegated to backup duty last year because of the holes in his game. Before that, he was actually a reasonably productive fantasy player, especially for a shortstop. In 2010, he showed what he can deliver for fantasy players when his team ignores his weaknesses. That year, Betancourt led the Royals in both homers (16) and RBIs (78). Though he never walks (his 3.4 percent walk rate since 2010 is the lowest for any full-time player), he also rarely strikes out, ranking a solid 48th out of 236 qualified players during that span with an 86.7 percent contact rate. Low strikeout totals mean respectable batting averages — Betancourt’s a career .266 hitter, again a respectable figure for a shortstop, or now a player who qualifies at second, as well as both corner infield spots.

Betancourt is currently sporting a .291 Isolated Power mark, with one out of every five fly balls going for home runs. Those aren’t even close to sustainable paces, given his career norms (.129 ISO, 5.4 percent HR/FB rate). But as long as he’s in the lineup, Betancourt can be a viable source of counting stats without killing your batting average. Ramirez could be back as soon as Friday, but that would simply push Betancourt to first base, where he’d play for the next four weeks and maybe more, given Hart isn’t due back until at least May 30. If you’re in a decent-size league full of savvy owners, whoever has Betancourt would surely jump at the chance to trade him before the inevitable regression occurs and the mocking begins anew. But if you’ve got, say, Kevin Youkilis on your DL, you could do a lot worse than a durable player with some pop who is going to play every day for at least the next month. Betancourt is not winning anyone any leagues from this point forward. In anything deeper than a standard mixed league, he’s still worth picking up on the cheap.

There may be no better story in the game right now than Gattis’s. If you own him, you still need to sell immediately. Gattis has just 22 major league games under his belt, so we don’t yet know what his baseline performance level might be. It’s still safe to say it won’t include a .304 ISO; Josh Hamilton led baseball last year in Isolated Power, and he put up a .292 mark. The much more pressing issue is one of playing time. Brian McCann is due back Monday, which means in weekly leagues, Gattis’s time as a starter is likely officially up. He could fill the David Ross role for the Braves, suiting up roughly once every four games as the right-handed backup behind the lefty-swinging McCann.

If you bought Segura in your draft or auction, you likely got him late/cheap, and you likely did it for the steals. Segura’s best minor league season came in 2010, in the hitter-friendly California League. In 130 games that year, he hit .313/.365/.464, with 10 homers and 50 steals. In 399 career minor league games, he stole 139 bases and was caught just 38 times. Segura’s major league debut last year wasn’t nearly as auspicious, producing no homers and seven steals while hitting .258 in 45 games. He’s crushing those levels this year, hitting 100 points higher, and already surpassing his steals total for the entire year, with nine extra-base hits in 25 games. There are competing factors here, some suggesting major regression ahead, others implying that some of this might be real. The .392 batting average on balls in play will come down. But the mini-burst of power, at age 23, in his first full season in the big leagues isn’t necessarily doomed.

Honestly, this one is a toss-up. We don’t have a big enough sample size to measure most stats a month into the season. But we do know that Segura is hitting second in what’ll be a very potent top half of the order when Ramirez returns. He sports a solidly above average 84.4 percent contact rate; he’s got the green light to run, even hitting in front of Ryan Braun; he’s going to play virtually every day, given he’s one of the team’s building blocks; and his defense will have value even when his bat cools off. The way to play it really depends on what Segura’s perceived value is in your league. If you can get a now-healthy Hanley Ramirez for him (or Segura plus a bit for Ramirez), you make that move. If your leaguemates aren’t convinced, hang onto him. The .270/35 SB/no power/no. 8 hitter counting stats season you hoped to get if things broke well is still very much in play. Only now, you might have a shot at something more.

This is what Baseball America said about Cingrani just four months ago: “Cingrani’s slider will determine his future role. He can thrive in the bullpen with two pitches, but needs a better breaking ball to succeed as a starter. With a full rotation in Cincinnati, he’ll head to Triple-A to begin 2013.”

That is not a ringing endorsement. And really, it’s consistent with his prospect profile since the day he was drafted two years ago. He was a third-round pick who came with a tiny fraction of the hype generated by the Stephen Strasburgs and Gerrit Coles of recent vintage. Again, small sample size. But Cingrani’s pro career is starting to offer enough evidence to suggest his upside might be higher than that of a back-end starter or a reliever. Before his monstrous start to this season, Cingrani’s minor league numbers were huge: 211⅔ IP, 278 K, 60 BB, 10 HR. Yes, he throws almost exclusively fastballs, with a few sliders and a very occasional changeup thrown in. That narrow repertoire can work in the minors if your stuff is good enough. But very few non–Randy Johnson starters have leveraged so few offerings into sustained success in the big leagues during the past 10 to 20 years. That means that Cingrani has to be a sell-high. Between the risk of a demotion or a move to the pen once Johnny Cueto comes back, and the likelihood his value will never be higher than it is right now after a scoreless, 11-strikeout, two-hit masterpiece against the Nats, it’s worth exploring the market to see what you can get.

Tied with Mariano Rivera and Sergio Romo for the major league lead with 11 saves, Grilli’s grand opening as a full-time closer has been outrageously successful. There has to be a strong temptation to trade him, given we’re talking about a 36-year-old reliever handling the ninth for the first time, on a team that, if 20 years of history are any indication, would seem likely to start losing a bunch of games some time soon.

Resist. For starters, Grilli is aging magnificently. Check out this strikeout rate run:

Grilli’s innings per start have fallen gradually as his career has worn on, giving him the freedom to let loose with fewer pitches per appearance. His fastball velocity is higher now than it has ever been. And if the Pirates do regress, that doesn’t mean we won’t see plenty of Grilled Cheese Time. A 70-win team could easily serve up nearly as many save tries as a 90-win team, if the lesser team, say, isn’t potent enough to blow out a lot of opponents. When that happens, you get something like the 2002 season, when then-Pirates closer Mike Williams racked up 46 saves on a team that won just 72 games.

If you don’t own Grilli, he’s another one of those preemptive buys while your opponent believes he’s a sell-high. If you own Rivera, flipping the Sandman for Grilli and, say, a useful bat makes all kinds of sense.