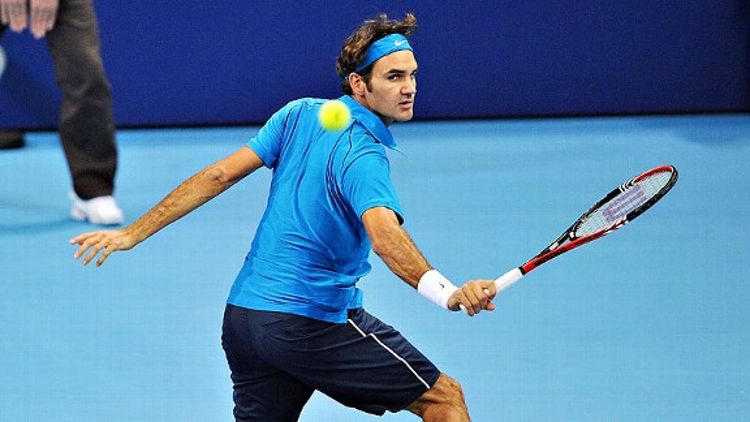 This is hard to say, but:

Congrats on a great season, Novak. 69-4 in 2011, that’s quite a feat. Ten tournament victories, three of which were Grand Slams, a combined 10 wins over Nadal and Federer, and the end-of-season World no. 1 ranking. Wow, I didn’t think you had it in you. Sure, I think your whining and complaining is childish. And yes, everytime you fist pump at your opponent, it makes me want to jump through the television and club you with my Wilson ProStaff. Additionally, I happen to think two-handed backhands are for the weak and prepubescent. And the whole looking like a D-side Ben Affleck doesn’t really help your case in my eyes either. But none of that matters, Novak, because 2011 was your year. There’s no argument.

It pains me to say, however, that down the line we may look back at your marvelous 2011 and see it as the outliered peak in your other wise above-average career. I’m not trying to call you the Brady Anderson of Tennis or anything, that would simply be rude, but there’s one little thing that might stand in your way in 2012.

This might sound like a crazy thing to say, seeing as that his three tournament wins this year were his lowest since 2002, back when he had 16 fewer Grand Slam titles. Coupling that with the fact that he is tour’s great-grandfather as a 30-year-old, and Federer having a breakout 2012 seems even more ridiculous.

But this is Roger Federer we’re talking about. The guy who, at 29, ended Djokovic’s 41-game 2011 win streak at Roland Garros and probably prevented Djokovic from obtaining the calendar year Grand Slam. The guy who, at 20, prevented Pete Sampras from winning his 5th straight Wimbledon, signaling the official passing of the champions torch from the nineties to the aughts. The guy who, throughout the majority of his career has been a case-study in how to lose gracefully, but has always made it clear that nothing wrecks him emotionally like defeat.

If you think Federer is happy with the way 2011 panned out given that at 30 he’s still in the discussion, you obviously don’t understand Roger.

He lost his year-end no. 1 ranking and has fallen to 4. Even though his record-setting mark of consecutive Grand Slam Quarterfinals is still alive at 30 (last miss, 3rd Round exit at the 2004 French Open), he hasn’t won a Grand Slam in the past seven tries (last win, Australian Open, January 2010). And to top it all off, there’s a kid without beautifully flowing hair named Novak that people are whispering might be better at his prime than Roger was in his.

It seems as if Roger has heard these whispers, internalized them, made a smoothie, and is now in the process of getting back what is rightfully his: everything.

While some will wait until the beginning of the 2012 season to see if shifts of power occur between the Big 3 (sorry Andy Murray, I don’t consider you when discussing professional tennis), it’s blatantly obvious that it’s already starting. Look at how the post-U.S. Open ATP season (an extremely overlooked, but important few months of tennis) has fared for the Novak and Roger.

Roger has gone on an absolute tear since his last loss. Coincidence that this win-streak comes after a 5-set loss to Djokovic in the U.S. Open Semifinals? I don’t think so. With the ATP regular season finished and one final tournament, the Barclays ATP World Tour Finals, slated to take place, we will see whether or not he can extend this hot streak to 15 straight wins.

Regardless of how this last tournament plays out, he’s moving in the right direction. Instead of arguably limping into 2012 amidst losses, withdrawls, and retirements like Djokovic, Grandpa Fed is looking like he’s plotting for something big. Something extrodinarily big.

Roger has always had a fantastic sense of where he stands among the greats. He knows what it means to tie Sampras with his seventh Wimbledon title. He also has a phenomenal sense of place and history. The fact that, three weeks later, he could avenge perhaps his greatest career disappointment, a stunning quarterfinals defeat to James Blake in the 2008 Summer Olympics, and win his first singles Gold in the place he calls “the Holy Grail of Tennis” makes the script for 2012 the thing movies are made of.

There is no arguing, stats-wise, who is the man to beat in 2012. It’s No-Djo. But when it comes living up to the moment, something Roger has made a career out of doing, there is arguably no moment larger than what lies ahead in 2012. As a fan of tennis and a fan of the great Swiss, I hope he pulls it all off, goes out on top, and then passes the torch off to someone else in 2013. It’s about time for Roger to gracefully and effortlessly glide off into the sunset, I just hope he does it on his own terms. I can’t think of any better way than by conquering the challenges that lie ahead in upcoming year.