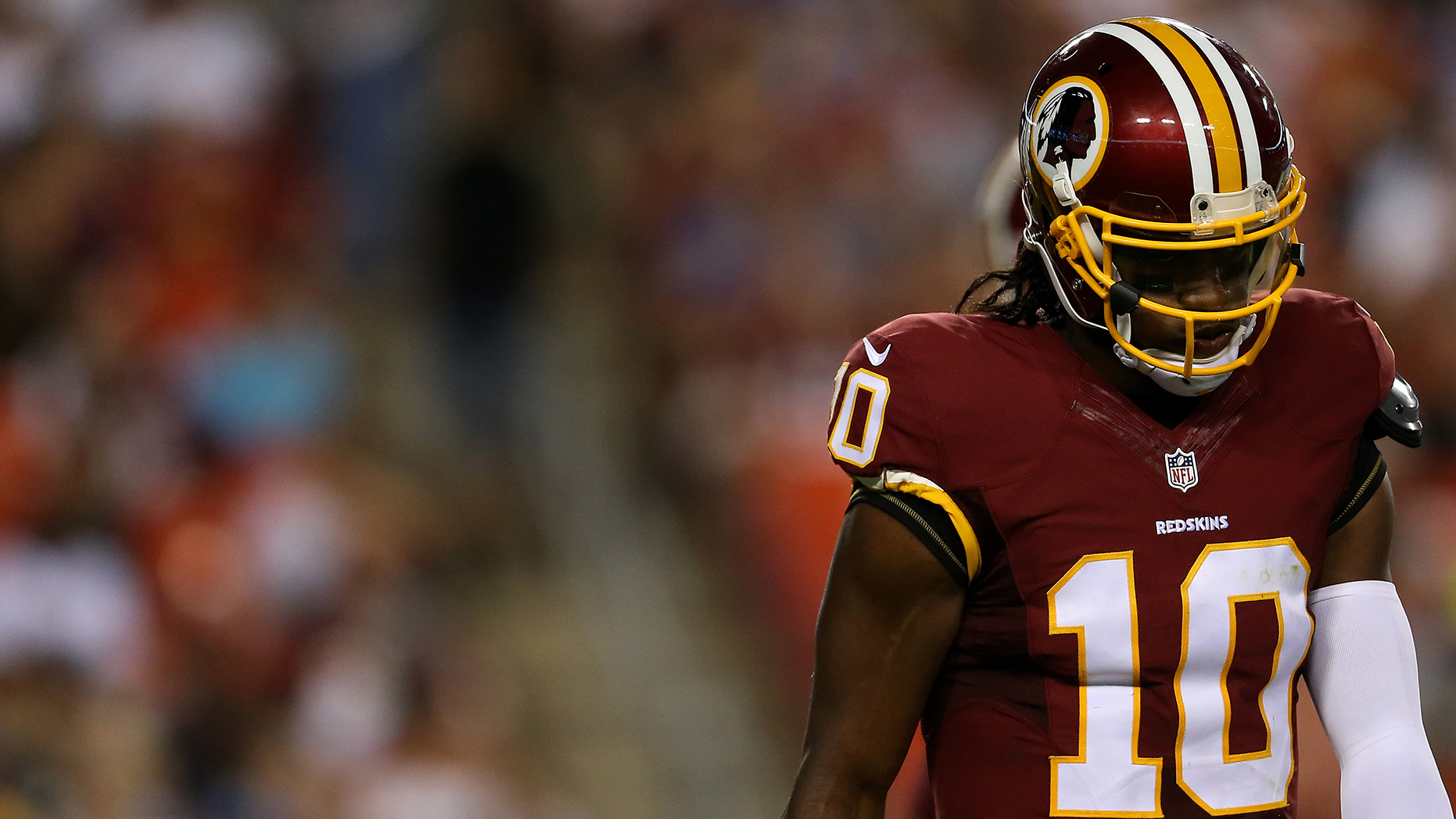 I don’t know if I’ve ever seen a head coach be as openly hostile to a starting quarterback as Jay Gruden was toward Robert Griffin III in D.C. last year. In the final month of the season, it seemed like there was always another passive-aggressive shot being made. It was all pretty unprofessional, like a Coors Light commercial remixed with Facebook comments. And almost all the fans were on Gruden’s side! The media was just as bad. Even his teammates turned on him. Remember DeSean Jackson’s “basic people” Instagram? This was how the whole year went.

Gruden says it's important to get a lead so griffin doesn't have to do a lot of dropback passing and defense reading.

MAYBE THIS TIME WILL BE DIFFERENT.

#75 is clearly a federal informant https://t.co/fdIqg0dW6X

This is what the most dysfunctional team in the league looks like. Drink it in. We started this week with RG3 telling a local reporter that he thinks he’s the best quarterback in the league.

That led to predictable cackling across the NFL media and the Internet. But then the cackling led to others defending him, arguing he was taken out of context for clickbait. Even RG3 said that. Maybe it’s true. But as someone who’s lived among D.C. sports fans for RG3’s entire time with the Redskins — and spent most of that time defending him — I’d like to point out that Griffin definitely deserves some of the blame here. It’s OK to ask him not to say something that might get taken out of context and turned into a national controversy.

I get the “all competitors have to think they’re the best” angle to this, but at some point you just sound like a crazy person. It would be like Sam Bradford calling himself the best quarterback in the league. If someone like Bradford said that, no matter the context, wouldn’t it get picked up by every outlet in the media? That’s not clickbait. That’s, “Whoa, listen to this person who clearly doesn’t understand what ‘best’ means.”

Griffin’s critics may have been unfair, but he doesn’t make himself easy to defend. That would be the entire RG3 era in one sentence — except that it doesn’t quite do justice to how much of a disaster the Redskins have been this entire time. Things weren’t much better institutionally when he was good, except that in 2012, RG3 was so good that nothing else mattered.

He would glide through defenses like they were all going half-speed, he threw perfect deep balls to Pierre Garcon, he had Alfred Morris as the perfect sidekick, and it made football in D.C. more fun than it’s ever been in my lifetime. I’m a Cowboys fan, and I couldn’t even be upset when RG3 came in and embarrassed them on Thanksgiving. It was too much fun to get mad.

Now Griffin’s been hurt for two years straight. He’s trying to change his game and adjust to his own post-injury limits, but the usual Washington dysfunction just compounds the problems. It’s all such a mess. Kirk Cousins is doing a weekly guest spot on the radio, and hosts are teasing it as a possible interview with the starting quarterback. The offensive line is a nightmare. There are no tight ends anymore, and Jackson is already hurt. Gruden’s offense wasn’t even that great in Cincinnati, with real talent, but it looks even more hopeless now. The local media is ready to tear him down for all of this, and even ex-Redskins have said as much.

So, we all just have to watch one of the most electrifying rookie quarterbacks the NFL’s ever seen get run further and further into the ground. I’m not exaggerating when I say this is one of the most depressing sports stories of my lifetime.

This might be the saddest thumbs up I've ever seen: pic.twitter.com/Gfhu6qvzEb

After false reports on the team-sponsored broadcast (of course), preseason game no. 2 ultimately ended with a concussion that will keep Griffin out indefinitely. It should be more surprising that RG3 stayed in the game as long as he did last night — and some people are upset — but given how little Gruden seems to think of his starting quarterback, it’s par for the course. There will be no special rules for RG3 this year, and every endorsement will be more tepid than the last. If there are still people in D.C. who think Griffin is a prized asset worth protecting at all costs, they do not work for the Redskins coaching staff. If anything, it’s surprising they’re not running naked bootlegs every play to see if someone will solve this problem for them.

Jay Gruden on RGIII: "I would imagine, depending on how long he is out, he is still going to be our starter." Strong. http://t.co/LBxVSAetyV

I just can’t believe that Washington is going to do this all over again for the next four months. Please, just trade him. Bench him. Give him the Terrell-Owens-on-the-Eagles treatment where he’s paid to be away from the team. Whatever. It’s time for this story to end before it gets any more miserable. I don’t know if RG3 can succeed anywhere else, but he won’t succeed in D.C. That became obvious last night.

RG3 deserves some of the blame, sure. He’s been tone-deaf, stubborn, and insecure. But he’s also not healthy. He was put in an offense early on that never asked him to evolve and left him exposed to injuries. Those problems were then compounded by the dumbest organization in the league. I mean, for god’s sake, this team almost definitely played him on a blown ACL. It ignored the advice of the best sports surgeon in the country and lied about it.

And he’ll probably never be the same. Griffin is a shell of himself now. Blame whoever you want, but when you look at how all of this happened, go back to the beginning and remember exactly who we’re talking about:

The March night when the Redskins agreed to send three first-round picks and a second-round pick to St. Louis for the right to go up to No. 2 in the draft and select Robert Griffin III, Washington’s brain trust celebrated in a style that was beyond grand. Redskins owner Daniel Snyder boarded his private plane with general manager Bruce Allen and head coach Mike Shanahan, and the men flew to the Bahamas to celebrate their franchise-altering acquisition. The men spent the weekend toasting their trade, playing golf and celebrating a deal that neither Cleveland nor Miami could get done.

Did RG3 ever really have a chance?