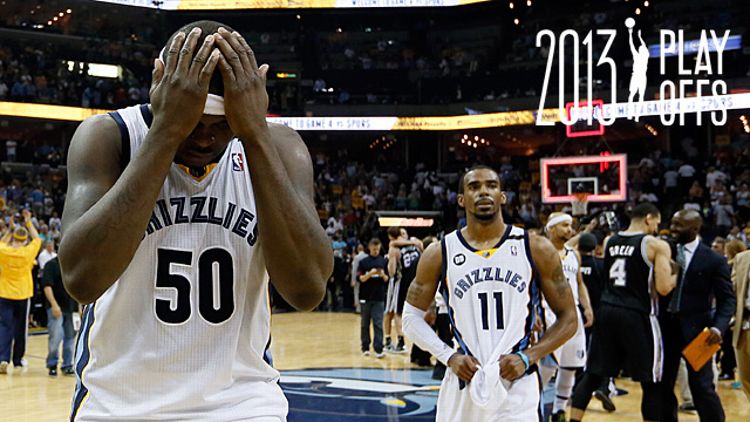 Some might say the Grizzlies’ crash-and-burn ending was a wakeup call to fans who went a little too crazy this past month. Maybe, but if anything, I think going down to the Spurs is our best proof yet that the Grizzlies were perfect and magical and wonderful. The same way the Spurs killed the ’99 Knicks, the 2005 Suns, LeBron James in ’07, and the Warriors two weeks ago, San Antonio took something fun and addictive and perfect and lit the whole thing on fire. Of course they did. That’s what makes them the Spurs, the basketball empire that exists to ruin everyone’s fun.

As for the Grizzlies? It’s been a long time since we had a team that was this enjoyable to follow on a daily basis. It’s like the Internet created a dream team. You had Marc Gasol, the underrated superstar designed specifically for basketball addicts to fall in love with and praise with every set screen. There was Zach Randolph, the gummy bear power forward with an (alleged) history of petty crime and drag racing on the streets of Portland. They were coached by Lionel Hollins, the hardass old-school coach who doesn’t trust advanced stats, and run by John Hollinger, the advanced-stats rock star who left ESPN to help manage the Grizzlies in December. This was a team for everyone. We were all on that elevator with the Grizzlies.

“You wasn’t with me shootin in the gym!” w/ pops- @quincypondexter, uncle @spencersoo, and gramps! #buckets twitter.com/bucketsQP20/st…

Now the season is over, and because this is the Internet and everyone has a job to do, there will be a lot of talk about what went wrong and where Memphis goes from here. But instead of doing all that, let’s just savor what went right.

Here’s what we should all remember about the 2012-13 Memphis Grizzlies:

THIS is what Zach Lowe was raving about all year.

2. Free beer at 11 a.m. to celebrate the Grizzlies
From the Memphis Business Journal: “The Memphis Grizzlies and A.S. Barboro, the Memphis distributor for MillerCoors, are doing their part to take the edge off of tax season while celebrating the Grizzlies’ upcoming 2013 playoff run. Beginning at 11 a.m., April 15, the Grizzlies and A.S. Barboro will be giving 300 fans a free 24-ounce Coors Light in the plaza of FedExForum. The event will include Steve Hegdale, general manager of A.S. Barboro, receiving the key to the city from Memphis Mayor AC Wharton.” It was only 300 beers, yes, but (a) the Lakers aren’t throwing 11 a.m. beer parties, and (b) we like to assume those people stayed there all day long and got drunk in public to honor the Grizzlies. Because Memphis.

3. Everything in this Lee Jenkins Sports Illustrated story
It’s all perfect. But especially: “Chris Rhodes has been cutting Randolph’s hair for the past 10 years, ever since Randolph saw his work in a video featuring Memphis-based rapper Yo Gotti. When Randolph played for the Blazers, Clippers and Knicks, Rhodes flew to him once a week. Then Randolph was traded in 2009 to Memphis, home of Christyles, the barbershop Rhodes co-owns in the arts district with former NBA star Penny Hardaway. Randolph swings by every Friday or Saturday. He also stops in before certain nationally televised games. He’ll even summon Rhodes to his house after arduous road trips, as late as 3 a.m. Randolph doesn’t watch much film, but he does pay close attention to frizz.”

If you’re keeping track at home, Z-Bo (a) discovered his favorite barber in a Yo Gotti video, and (b) must’ve spent at least $100,000 flying him around the country to cut his hair. Neither of these details is even a little bit surprising, and that’s what makes the story great.

4. The New York Times writing about Tony Allen and the Tao of Grit and Grind
WE MADE IT: “He gave a shout-out to his teammate Zach Randolph as he walked past and acknowledged Durant’s brilliance before highlighting the importance of defense. Allen, who spoke in a low growl, enhanced the entire interview by waving his arms like an orchestra conductor. ‘I was just saying the first things that came to my mind,’ Allen said last week. ‘It just related to how I live my life. I’ve always been having to use heart, grit and grind. It ain’t just no phrase. That’s my whole career.'”

5. The reason Instagram was invented
Three 6 Mafia shows the best kind of love.

6. Pictures of a gigantic Marc Gasol in high school

(Via The Basketball Jones)

Quincy Pondexter checking in. Was despondent at FRI practice that he might not get to meet Paul McCartney who is in town for Sunday show.

Griz are a focused group, but half the huddle watching Mike Conley karaoking Bon Jovi on the jumbotron during timeout.

Here he is meeting after practice with a young Grizzlies fan with cerebral palsy. The boy calls himself C-Bo. They are both awesome.

11. Z-Bo
Living the spiritual principles of Grit and Grind.

12. And these old ladies

This Grizz run really has old white ladies wearing shirts with Zach Randolph’s face on them that say I DON’T BLUFF twitter.com/afigman/status…

It was a hell of a ride.

Ultimately, the Grizzlies were a team who died as they lived: ugly as hell and engulfed in flames. And we don’t know if this group will ever be quite so successful again. But for the record, that’s totally cool. They may have gone down early, the future may be uncertain. But whatever happens from here, we will never, ever forget this team, motherfucker.