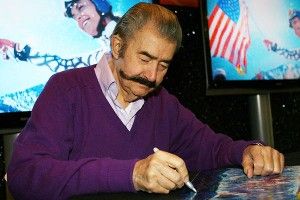 The first time I saw a LeRoy Neiman painting was in a television commercial. Of this, I am sure, even if I cannot remember the portrait being advertised or how much it was being sold for or even why it was being hawked on cable at that particular moment. It may have been a rendering of Larry Bird and Magic Johnson, and I may have seen the ad during an episode of Roy Firestone’s Up Close, or I may be conflating my memories, since I believe Neiman often appeared on ESPN during the network’s Australian Rules Football epoch.

Neiman, who died this week at the age of 91, was the most successful sports portraitist of his era, in part because he was the only noted sports portraitist of his era. He was prolific and wildly rich (in a 1985 Sports Illustrated profile, Franz Lidz estimated that Neiman grossed more than $10 million a year — his painting of the 1975 Kentucky Derby was priced at $500,000) and critically reviled. He “makes art for people who don’t like art,” one critic said; “What Howard Johnson’s is to the taste buds, LeRoy Neiman is to the eyes,” a magazine designer said. His paintings are brightly colored and impressionistic and easily appreciated by the masses of Americans who are not patrons of the Metropolitan Museum and who think Mark Rothko was great in The Avengers. His work is as ubiquitous on the bathroom walls of Midwestern sports bars as Monet’s water lilies are on the walls of women’s dorms at East Coast universities.

Neiman was a first-class gadfly, a bundle of dandyish affectations. He wore eggshell-white suits and wingtip shoes, smoked long, thin cigars, and grew a mustache similar to that of his mentor, Salvador Dali (though Neiman once said it was inspired by Clark Gable). He cultivated his image as much as, if not more than, his art. “LeRoy has style,” one publisher told writer Pat Jordan in 1975. “He has some beautiful suits. Still, I don’t think he’s put his soul into a painting in 10 years.”

His was a classic American success story: He grew up dirt poor in St. Paul, Minnesota, the son of a railroad worker who deserted the family when Neiman was young. As a kid, he began drawing pictures of Abraham Lincoln, from whom he realized “you could develop your personal image into a positive thing”; he sketched pictures of cows and turkeys for a local supermarket and drew tattoos on his classmates’ arms during recess. After a stint in the Army during World War II, he studied at the Art Institute of Chicago, became a freelance fashion illustrator, cultivated his “slash and splash” style, and then befriended Hugh Hefner, whose nascent men’s magazine was just finding its footing. He devised the recurring character known as Femlin — an otherwise bare-naked starlet dressed in stockings and high-heel shoes and opera gloves who became one of the magazine’s signature images — and came up with a recurring feature called, “Man at His Leisure,” which granted him access to the high life for half a century.

Neiman schmoozed with pop celebrities and their hangers-on rather than fellow artists; he painted from nude beaches and bordellos and P.J. Clarke’s pub in Manhattan, and became a fixture at high-profile sporting events. He would sketch from the best seat in the house, sometimes on live television. He was the official artist for numerous Olympiads, made several cameos in Stallone’s Rocky films, and drew live for CBS from the 1978 and 1979 Super Bowls with an electronic pen. I don’t know any highbrow artist who would be willing to do that, and I guess that was the point: Neiman found a niche and worked it for all it was worth. He preferred to draw the “fittest, the finest, and the richest”; he only did “great sports paintings of great athletes.” He recognized the power of imagery in the television era, and rode the wave through his career. He was particularly enamored of Muhammad Ali and Joe Namath, by the way they cultivated their personalities through media, in part because he did the same things himself. I imagine he always saw himself as one of them, and because of this, he wanted to portray his subjects at their best.

The difference between Neiman and 19th-century impressionists, one gallery owner noted, is that they would paint women at their toilettes, sans makeup, while Neiman “wants to show everyone with their false eyelashes on at all times.” When he invited himself to Bo Derek’s ranch to paint a portrait of her on a horse, he marveled, “Bo is so aware of how she looks from every angle that she’s completely natural. That’s vanity at its finest.”

A few years ago, after sitting through Robert Altman’s interminable ballet movie The Company, my wife and I got into a heated discussion. I’d just endured 112 minutes of Neve Campbell pirouettes, and I was in a sour mood, and so I began to argue that football was as much of an art form as ballet. It was, I realize, a silly train of thought, since football is a means to a completely different end, and since any artistry present in the games we watch is an incidental byproduct of striving for victory.

Maybe someday a Warholian postmodern genius will come along, someone who can find a way to bridge the gap between the low culture of sports and the high culture of the arts. LeRoy Neiman was not that man. He was a sly character who painted colorful pictures of beautiful people that look good above a rec-room bar. He may not have been a great artist, and he may not have even been a good artist — when I first saw this portrait of a Minuteman done in the wake of 9/11, I thought it was a rendering of Carl Spackler from Caddyshack — but I’d like to believe he recognized the same beauty and wonder in sports that so many of us do, even if we can’t properly articulate it in words or pictures. It may be a futile pursuit, but Neiman got fabulously wealthy in the trying.

Grantland Archives: Spoelstra in the Philippines