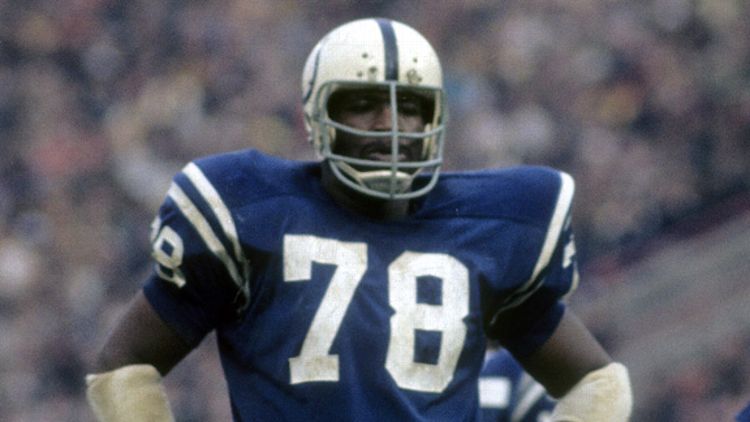 They hanged Bubba Smith in effigy at Notre Dame. This was before he tore apart cans of low-calorie beer with his bare hands, before he showed up on Vega$ and Taxi and Hart to Hart and Eight is Enough, before he played a Bunyan-esque police officer in a film series that evolved from a low-IQ spoof into the pinnacle of ’80s Hollywood vapidity. This was in 1966, before we learned to love Moses Hightower, and Bubba Smith was a 6-foot-8 defensive lineman who wore size 52 suits, tossed around blockers like feather pillows, and played for the blackest major college program in America. It was the week before the most famous tie game in history — Michigan State 10, Notre Dame 10 — and at a South Bend pep rally, Bubba’s likeness was hung next to a sign reading, “LYNCH ‘EM.”

At a time when even most northern teams feared starting more black players than white players (and a Catholic school like Notre Dame struggled to recruit any black players at all), Michigan State started eight black players on defense, as well as two black running backs and a black quarterback. Their coach, the gregarious Duffy Daugherty, recruited nationally; he traveled to parts of the south that other coaches would never venture into. In Beaumont, Texas, he found his biggest star of all in Bubba Smith, the son of a draconian high school football coach who once gave each of his players a public lashing with a leather belt when they were trailing at halftime.

Smith — who was found dead in his Los Angeles home yesterday, apparently of natural causes, at age 66 — wanted to follow his brother to Kansas, but they didn’t want another Smith brother there; he wanted to go to the University of Texas, but, like most southern schools in the early 1960s, they couldn’t take him. And so he went to East Lansing, having never really interacted with white society before. The first time he stood up to meet his white roommate, the roommate’s parents nearly fainted. It was not a utopian community — Smith and his teammates often had trouble finding an apartment to rent in town — but Bubba had an unmistakable charm. He reportedly joined a Jewish fraternity; he was voted the most popular student on campus, even as he tested the limits of authority. His senior year, according to Mike Celizic’s The Biggest Game of Them All, he drove an Oldsmobile with his name written in gold letters on the door, most likely paid for through the largesse of alumni and boosters. Occasionally, Bubba parked it in the university president’s space.

If all this sounds like a movie, well, that’s because it was, sort of. Smith often played a similar character on-screen, a loveable giant who was never quite as manipulable as he let on. Once he’d made a few Miller Lite commercials that played off tortured football metaphors, but once he realized that he’d become more closely associated with the culture of drinking than with the game he played, he stopped doing them. He went into acting at a time when the possibilities for an 80-inch-tall mustachioed black man were limited to novelty cameos, and he won enough respect to become a series regular on a couple of short-lived programs.

It would be a stretch to say that Smith was a brilliant actor, but he was always genuine. There is no way, even now, to make an unironic defense of the Police Academy movies, but Smith was the realest thing about them. He could not mimic police sirens with his vocal cords, and he did not fall into comic tantrums, and he wasn’t a cheeky, hipster dickhead like Mahoney. He didn’t really say much at all; mostly, he spoke with his physicality, with a blend of intimidation and charm, and he won over a generation of suburban white kids without sacrificing his dignity. He was undeterred by taunts from alley-dwelling Happy Days stand-ins. When he wrenched out the seats of a 1977 Civic to practice for his driving test, he was manipulating the situation to fit his needs. Smith was always eminently capable of cultivating his image in his favor; what began as a dehumanizing chant of “Kill, Bubba, Kill” by Michigan State fans eventually became the ironic title of his autobiography.

Maybe it was just the times. Maybe it just so happened that Bubba Smith came about a moment of stark change in American life, and he rode that wave to stardom. But he wasn’t ever naive. Toward the end of that tie with Notre Dame, Smith exhorted his teammates, “We got too many niggers on this team to win the national championship. We have to find a way.”

He was right, of course: By settling for a tie, Notre Dame finished first in both the AP and UPI polls. But Bubba was not discouraged. He saw beyond the moment. He made his own way.

Michael Weinreb is a Grantland staff writer and the author of Bigger Than the Game: Bo, Boz, the Punky QB and How the ‘80s Created the Modern Athlete, which was released in paperback this week.