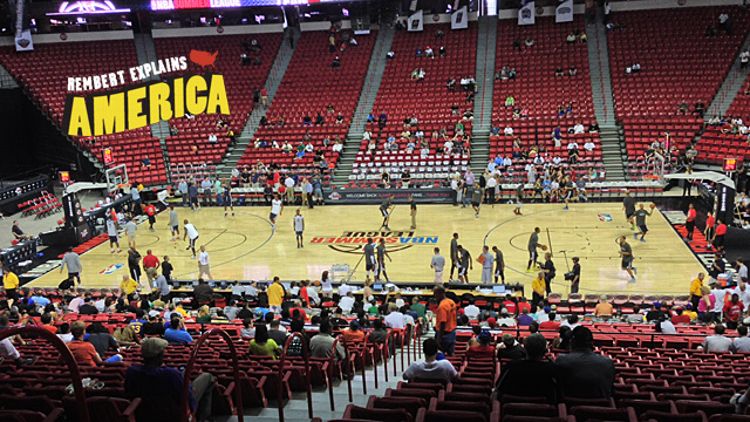 My initial intentions were not kind. But people change.

After two hours of watching the NBA summer league in Las Vegas, I didn’t have one real idea of what to write about, mainly because 95 percent of the NBA players I knew of were not in attendance. I’d watched a portion of one game, and wandered around the arena desperately looking for inspiration, but had nothing beyond an essay titled “NBA Summer League Groupies and the Men Who Love/Just Met Them.”

After 30 minutes of nothing, I went to the bathroom. Then, a few seconds later, I hear the voice of a living human singing the national anthem.

You gotta be kidding me. They really went all out for these games? They didn’t just roll the ball out there or rock-paper-scissors for first possession? This wasn’t pickup? Could I not shoot jumpers on the court if all the gameplay was taking place on the opposite half? Really?

The answer to all of these rude questions was “No,” and because of that, my gut was to mock the very existence of this game. So I sat down. On the scoreboard, it said the Timberwolves were playing “D Select.” A D-League team. Just great. A Timberwolves team composed of Shabazz Muhammad and 11 of his friends vs. a D-League team. This was what I drove five hours from L.A. to see. Fantastic.

Despite my seething cynicism, I couldn’t help but notice the D-League players’ enthusiasm before the game, despite the arena being one-tenth full.

There weren’t just high fives and pounds; I actually saw a few pregame hugs. This excitement wasn’t matched by the T-Wolves, but the D-League players didn’t seem to care. I wanted to make fun of this, but I couldn’t. It was admirable.

What I could make fun of were the people in attendance. Why was anyone here? WHY WAS MY MAN HERE?

The scene in the arena, from the players, to the crowd, to the fact that they were blasting songs of the hip-hop/EDM persuasion at an uncomfortably high volume — none of it made much sense. But I didn’t have anything else to do, so I stayed.

Finally, the game began. With the exception of a few plays, it wasn’t exceedingly interesting. Shots were made, shots were missed, and the crowd really only got excited when T-shirts were being thrown into the stands. In the second quarter, however, that changed.

One corner of the arena became increasingly invested, not just in the game, but in a D-League victory. The power source of this cheering section was a man in a LeBron James Miami Heat jersey, easily the loudest person in the building.

When the D-League scored, he stood up and clapped. When a player on the Timberwolves would argue a call, he’d yell “Let the ref decide!” And when the ref missed a blatant foul against a D-League player, he’d yell: “It’s not a boxing match, it’s basketball!” or “Protect my D-League players!”

He was so captivating, I almost stopped watching the actual game. Through a combination of his excitement and the noticeably harder play of the D-League team, I was becoming invested in their victory as well. I had no choice but to move over to the excitable section.

Within a minute of joining this group, I witnessed the D-League Select center, Brian Butch, grab a rebound, attempt to clear some space, and seemingly knock one of the Timberwolves to the ground, by way of bow-to-face.

An audible gasp came from the crowd. After a few seconds of silence, there was a message from my hero in the LeBron jersey:

“Get off the ground, Denzel.”

It looked as if the victim of the elbow had a bloody nose, proving the direct hit, but I didn’t care. I was so pleased with that heckle. Why Denzel, you ask? Answer: Why not Denzel?

For the remainder of the game, the dude in the LeBron jersey reminded everyone within earshot (the entire arena) that he was “turnt up” and could not be “turnt down,” and as it became increasingly clear the Timberwolves were not going to come back, he yelled at their bench and suggested they “put in the coaches.”

Amid all the smack talk, however, it was clear there was a real reason to root for the D-League Select team in this tournament. Even while lacking the respect that the other NBA teams automatically received, they cheered louder for their teammates, they hopped off the bench at timeouts to congratulate each other more intensely, they responded more emotionally to dunks and blocks and other highlight-worthy occurrences, and they seemed to be having more fun than the opposing team, or anyone else at Summer League.

And it seemed to be working. After the game, I learned that they were 4-0 in summer league play. This fact, a feat in itself, only became more impressive as I finally learned what this “D League Select” team actually was.

“They sent us e-mails about the team, and then we came together the Sunday before last, in Vegas,” Stefhon Hannah, the point guard for the D-League Select team and player for the Santa Cruz Warriors, told me after the game. The “select” portion of the team name now made sense, because they were 12 players selected from different teams to represent the D-League in the NBA summer action.

It was all very Mighty Ducks 2. The D-League Select team was Team USA, playing against 30 Icelands. How could I not love this story?

“On that Sunday we had a meeting, and our whole mind-set from the jump was ‘Let’s come in and win a championship,'” Hannah continued. “So that’s our goal. And if we win, it’ll look good for everybody.”

Standing next to him was his regular-season opponent and D-League Select teammate Ron Howard, from the Fort Wayne Mad Ants.

“There are no egos with us,” Howard chimed in. “We’re past trying to prove who we are. We just want to show NBA scouts and GMs that we’re the better players. And we’re proving it now. Everyone will have to look at our entire league, and they won’t be able to say ‘Oh, it’s just the D-League.’ We understand that we represent something bigger than us. It’s our teams and the entire league that’s given us a chance to come and do this. So we’re taking it serious.”

This chip-on-the-shoulder sentiment was echoed by the coaches, too. Joel Abelson, an assistant coach for the Select team and last season’s head coach for the Sioux Falls Skyforce: “The Minnesota Timberwolves, they run Adelman’s stuff, the team we just beat. There’s two or three guys on that team that played for the Timberwolves, so they have a little continuity, certainly more than we did walking in on the Eighth of July for the first practice.”

Asked if the underdog mind-set was a tactic to motivate the players, he answered, “We try not to stress that, but the guys have taken that on their own, and they’re playing with a chip on their shoulder.”

The players weren’t the only ones with that mind-set. As a coach, he had something to prove as well. As we wrapped up and he walked away, he turned back my way and said, slightly begrudgingly, “I am too. I’m unemployed after summer league.” His one-year contract with Sioux Falls hasn’t been renewed, so he was looking for a job, just like the players.

Leaving the arena an hour later, I walked by Hannah and Howard. Howard was taking pictures with two fans and Hannah was signing a basketball for a little boy.

This was great. I wanted nothing more than the quarterfinals-bound D-League Select team to win summer league, all the players to make NBA rosters, and all the coaches to be wildly successful at the highest level. Who knew how that would turn out, but for this moment, things were great for the D-League. Deservedly great.

About Last Weekend: Phil ’Er Up