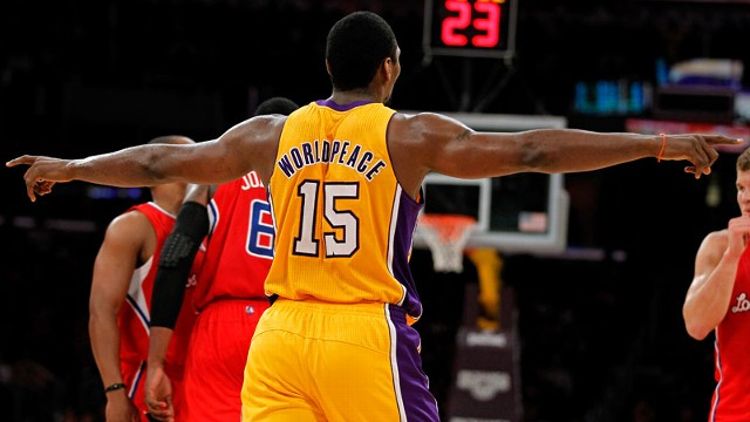 1. Metta World Peace, Swagvisor
Yes. I am letting the word “swag” out of the penalty box, albeit briefly. I feel like Workaholics buried the whole concept and read a prayer over its tombstone.

But if Metta World Peace wants to invoke it, LET IT BE INVOKED.

Now, when a new NBA star is born, it’s good to have someone who has been through it all to help him along the way. But we could not have asked for anything better than Metta World Peace becoming the Kris Kristofferson to Jeremy Lin’s Barbra Streisand. Knowledge jewels right here: “Do we talk about him? Yeah, we talk about him. We think he needs a better haircut … I don’t like that style. You’re in New York, the fashion capital. Change your haircut, OK? You’re a star now. Wear some shades. Shades, OK? Put down the nerdy Harvard book glasses. Put on some black shades, OK? With some leather pants. … Get some swag.”

2. Jeremy Lin, New York Knicks
It’s only February and this is the NBA, not the NCAA, but THIS IS MADNESS:

3. Jamie Oliver, Manchester’s Indiana Jones
Nominated by Andy Greenwald, who definitely owns two Menswe@r singles. The celebrity chef was renovating a branch of the Midland bank in Manchester, where he was planning on building a new restaurant, when he came across “rare Joy Division and New Order master tapes.” And gold. And jewelry. What!?

4. Abraham Lincoln, Vampire Hunter
Mark Lisanti, who has been known to randomly repeat long passages of the Gettysburg Address while on line at In-N-Out, nominates one of our greatest presidents: “His birthday gets a holiday. Daniel Day-Lewis is playing him this year in a prestige Spielberg vehicle. Also, HE KILLS VAMPIRES WITH AN AX.”

5. Dan McCarney, Immortal
Michael Weinreb, who has definitely watched at least half a dozen episodes of House, nominates the North Texas coach: “I am pleased (a) that Dan McCarney seems to be OK, and (b) that vodka is covered under Dan McCarney’s HMO.”

6. Brad Marchand, On a Bit of a Tear
Director’s commentary aficionado David Jacoby nominates this Boston Bruin. Marchand is not featured on the Bruins’ Stanley Cup DVD. Why? “[After the Cup, linemate Tyler Seguin] and I went on a bit of a tear, partying pretty much every night for a while … I went home and kinda continued it. I thought [winning a championship] was something that might never happen, so I was trying to take it all in, enjoy it.”

7. Landon Donovan and Clint Dempsey, Americans Abroad
Nominated by Brian Phillips, no doubt while he was staring at a picture of Old Glory and listening to Hulk Hogan’s “Real American.” These two have been tearing up the English Premier League; Donovan on loan to Everton and Dempsey for his longtime club Fulham. If they didn’t exist, Henry James would have to invent them.

8. William Regal, LOUDER THAN BOMBS
Bill Barnwell nominates Regal for giving one of the most mind-blowing pieces of sports commentary ever: “It was a typical NXT, the WWE’s canceled television show for rookies and young talent now moved from SyFy to the Internet. Female wrestlers Maxine and Kaitlyn came to the ring for a three-minute match that would be forgotten seconds after it finished. And then William Regal stepped in. The legendary mat technician from Blackpool has been relegated to commentary duties these days, and as this meaningless match was about to begin, he decided to go for one of the greatest bursts of commentary the world has ever seen. Here’s what he said:

“William, it’s really nothing. What difference does it make? Heaven knows I’m miserable now. I started something I couldn’t finish. Stop me if you’ve heard this one before. Last night, I dreamt that somebody loved me. There’s a light that never goes out. I feel like Shakespeare’s sister, like the Queen is dead. This charming man, the boy with the thorn in his side, showed up in my mind and I saw his girlfriend in a coma. Sheila, take a bow, he cried. Strangeways, here we come. These tears fell and I thought, my sweet and tender hooligans. Just ask, how soon is now? He looked in my eyes and it felt like a hand in glove. I began to panic and then Big Mouth strikes again. I blurted out, meat is murder. She said, that joke isn’t funny anymore. I walked away and he stole my heart like so many others. So, Curtis Bateman and the mystery man: shoplifters of the world unite. That’s what she told me. I had no idea what it meant, but she’s in a proper hoop about it.”

9. Emma Burton, K-State Fan/Kindergartner
From feel-good story collector Sarah Larimer: “How can you not love the story of Emma Burton, the young K-State fan who refused to participate in a class activity and color a picture of a Jayhawk for Kansas Day? My mom is a kindergarten teacher, so part of me wants to be all, ‘Oh, Emma. You probably should have just colored the stupid Jayhawk.’ But no, Emma, you do what you want. Do not color the stupid Jayhawk! Throw it in the trash! I don’t see what it has to do with Kansas Day anyway! Also, what is Kansas Day? Is that, like, a real thing?

10. Henrik Lundqvist, The Wall
Bring us home, Katie Baker: “Earned his league-leading seventh shutout Tuesday night with a 3-0 Rangers win over Boston. Is in the conversation not just for the Vezina Trophy (best goalie) but for the Hart. Is irresistible to men and women alike. Is The King.”