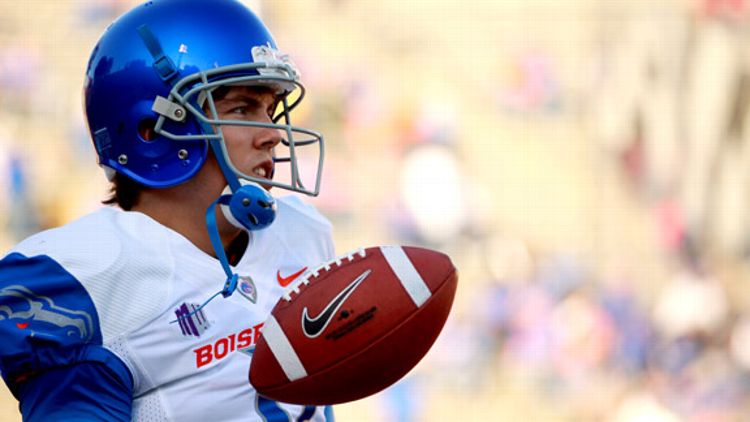 1. Kellen Moore, Boise State
This week’s Rankonia throne-holder comes from blue-turf enthusiast Chuck Klosterman: “Has anyone ever gotten jammed so much in one week? Boise loses one game to TCU … yet gets sent to the unseen MAACO Bowl to play totally irrelevant Arizona State. Moore ends his career as one of the five most successful college QBs ever and doesn’t even get an invite to the Heisman ceremony in New York. It’s almost like the NCAA is trying to erase them from existence.”

2. Anderson, Manchester United
Homeward Bound Blu-ray owner Bill Barnwell brought this incredible story of a man and his dog(s) to our attention. This is basically the plot to that Josh Duhamel-Katherine Heigl movie where they have to adopt their best friends’ child except subtract Josh Duhamel and Katherine Heigl and an adopted child and add an injured Manchester United midfielder, a mix-up at a Salford pet shop, and eight brand-new canine additions to the Brazilian’s household. Shout-out to the British press, which produces prose like this: “A United source told The Sun: ‘He’s been asking the lads if they fancy a dog — they all think it’s hilarious. He’s even approached people in parks while walking the dogs to see if he can find any takers. But at the moment he’s stuck with them and these things grow to be enormous. He’ll have to buy a castle to house them all.’” That is a very specific and hilarious “source”!

3. Ndamukong Suh’s 1970 Chevy Coupe
Not to make light of House of Spears’ bad/possibly criminally negligent driving, but if you’re gonna wrap a car around a tree, at least drive (into a tree) American.

4. Scott Rudin, super producer
The producer of such films as Marci X and the Shaft remake (and No Country for Old Men and The Social Network) got into a fantastically entertaining feud last weekend with New Yorker film critic David Denby. They were basically jawing about Denby breaking the very, very important review embargo on the latest David Fincher joint, The Girl With the Dragon Tattoo.

In the course of trying to patch things up with the notoriously volatile Rudin, Denby said, “In any case, congratulations for producing another good movie. I look forward to the Daldry.” First off, LOL at “the Daldry.” That dude is not Willem De Kooning. You don’t have to assign artistic ownership of a movie starring Tom Hanks and Sandra Bullock, based on a best-selling novel, to the guy who directed Billy Elliot.

Denby seems to be saying he reviewed Tattoo early because he didn’t want to bother with “the Crowe” (a.k.a. We Bought a Zoo). Check out Rudin’s response for some really well-worded gas-face delivery: “You will now cause ALL of the other reviews to run a month before the release of the movie, and that is a deeply destructive thing to have done simply because you’re disdainful of We Bought a Zoo.”

5. Bob Vander Weide, unemployed NBA executive
Via aspiring sommelier Katie Baker: “Because the phrase ‘I was playing paddle with friends and had a couple of glasses of wine’ wins everything ever.” Vander Weide, the just-made-former CEO of the Orlando Magic, reportedly drunk-dialed Dwight Howard to plead with Superman to stay and, you know, just to, like, tell him he loves him, man. Because he doesn’t do that often enough. When Katie nominated BVW, my first thought was of how much I hoped this convo went down like Campbell Scott’s call to Kyra Sedgwick in Singles. “DWIGHT! I WANT TO BE NEW TO YOU! I WANT TO BE MISTER NEW!”

6. Nick Saban, University of Alabama
Putting Oklahoma State fourth in your coaches’ poll? Respect. Real trolls do troll things, my dude. Take it away, Cowboy Brian Phillips: “Nick Saban, for making the most of the scanty 14 minutes College GameDay gave him to pitch BCS voters.”

7. Duany Duany, Co-Founder, The Duany Group, Ltd.
From Rembert Browne, private Internet investigator, who said the following in an e-mail:

“I got to Duany Duany’s LinkedIn page exactly like you think I did:

1. Reading up on Minsk, Belarus.
2. A sister city of Minsk is Detroit. That’s fantastic.
3. Mayor of Detroit is Basketball HoF’er Dave Bing.
4. Bing played for the Syracuse Orange.
5. Oh yeah, they won the national championship in 2002-03. That was cray.
6. Wow, that team was stacked: Melo, Hakim, & McNamara. Holy Sudan, there’s Kueth Duany.
7. I always loved Kueth, but no one beats his brother Duany Duany (DSquared). Wait, no Wikipedia page?
8. Google “Duany Duany.”
9. Fourth from the top, the LinkedIn page of Duany Duany.

8. Jeffrey Loria, Miami Marlins owner
From Triangle co-editor Sarah Larimer, Cardinals fan since 1984: “I don’t want to talk about it.”

9. Rashad McCants, dreamer
The former Tar Heel recently said that he would return to the NBA only “if I get to play with Kobe Bryant.” Totally normal request. However, it’s weird that McCants, a former Khloe Kardashian paramour, didn’t add “P.S.: An additional draw would be to totally blow up Lamar Odom’s perpetual sugar high.”

Previously from Chris Ryan:
The Reducer: Week 14, Spurs of the Moment
Your Weekend Soccer Guide
Peyton Manning and the Most Important X-ray Results in the History of the NFL