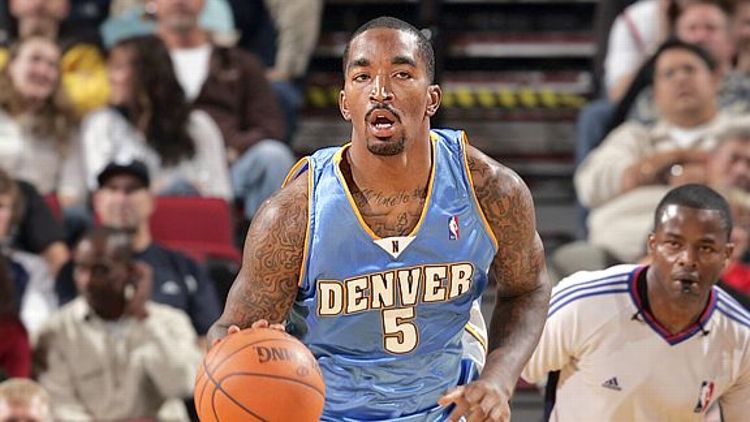 1. J.R. Smith, CTU Special Agent
How was your Thanksgiving? Did Aunt Jean get red-wine lips and make racist jokes? Did your 22-year-old cousin from Delaware just discover the word “swag” and proceed to say, “swag, swag, swag” every time he took a bite of cranberry sauce? Did your grandfather shear off his hand with a carving knife? Well, you still don’t have J.R. Smith beat. First he copped himself a knee injury and now my dude IS LOCKED UP. IN CHINA. Kind of. According to reports, Smith, along with Kenyon Martin and Wilson Chandler, will not be let out of his Chinese hoops contract. The fact that J.R. Smith has something in common with Jack Bauer basically just solidifies his status as an American folk hero. Let’s hope he was taking notes on all these moves.

2. Dave Rice, UNLV
Via Stacey Augmon fetishist Brian Phillips: “Not only upset #1 UNC in his eighth game as a head coach, with Jerry Tarkanian in the stands, but when he was asked what surprised him about the game he said ‘nothing, really.’ Dave Ice!”

3. Aaron Dobson, Marshall University
This is the best thing I’ve ever seen.

4. Jason Avant, Philadelphia Eagles
J.A. is basically the last man standing in the Eagles’ depleted and disgruntled receiver corps. On Sunday, Vince Young did his absolute best to not only put him on the bench, but put him on the great trainer’s table in the sky, leading Avant into a Kyle Arrington hit that the Philadelphia Daily News’ Marcus Hayes described as a “widowmaker.” After the game, Avant said, “I almost threw up.”

5. Griffin Lentsch, Grinnell College
Via David “D-III” Jacoby. The Bernard King of the Midwestern Conference dropped 89 [EIGHTY-NINE] points against Principia this past Saturday. “I didn’t think I would ever score that many points,” he said afterward. Uh … yeah!

6. “Shane,” The Walking Dead
Checking in from the postapocalyptic wasteland of Las Vegas, Bill Barnwell nominates a character from AMC’s The Walking Dead [MAYBE KIND OF SPOILER?]: “In the midseason finale of Walking Dead this past Sunday, Shane served as the character proxy for many of the show’s viewers. Sick of sitting around and debating the same moral questions over and over again while the rest of the cast endlessly chased after a character that nobody really cared about, Shane took a stand. He freaked out, started picking fights with everyone, grabbed the guns, and found some zombies to kill. And of course, by taking that action, he found Sophia and moved the plot along. Yay Shane!”

7. Alex Oxlade-Chamberlain, Arsenal
One of a long line of sparkling young talents to be nurtured by Arsenal and their manager, Arsene Wenger, the 18-year-old Oxlade-Chamberlain has impressed whenever he’s played. However, we’re celebrating the Ox for how he trains. This vid is a little old, but, in the oft-quoted words of Alan Partridge, he must have a foot like a traction engine.

8. Alexis Sanchez, Barcelona
Of course, I suppose doing it in a real game is more impressive.

9. Gavin O’Connor, Director
This filmmaker is not on the list for any cinematic accomplishments, but rather his ability to insult aging, homeless-looking American acting institution Nick Nolte. At a recent talk about their film Warrior, Nolte blamed the mixed martial arts film’s poor box office showing on O’Connor, who responded: “You live in a cave at home like Osama bin Laden. You have no access to anything and you pretend like you know more than everybody else. It’s called narcissism.” Ya burnt, Nolte.