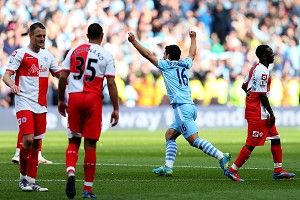 “Are we underrating Sergio Agüero? He isn’t as prone to fireworks or setting off fireworks as Mario Balotelli and he doesn’t have a deep, unquenchable love of golf like Carlos Tévez, he just scores goals. Alex Ferguson called Manchester City the noisy neighbors. But the only time there is a noise surrounding the Argentine, nicknamed “Kun” , is when he scores. And what a sound he created Sunday.

“That goal ended a 44-year title drought. Maybe I’ve just thought about that game and that team too much, but it seems like we’re not talking about Agüero enough. “

2. Dale Hunter: TELLING YOU WHERE TO SHOVE IT. SORT OF.
Sean McIndoe appreciates a man who can stand up to his boss. (Incidentally, Sean: I am sort of your boss, so … uhhh … you know what? Never mind. We’re cool. Right? Right.) Writes McIndoe:

“Everyone dreams of storming into the boss’s office and screaming, ‘You can’t fire me, I quit!’ Well, recent Washington Capitals coach Dale Hunter went with a slight variation by basically telling George McPhee: ‘You can’t fire me, literally, because I took a struggling team to within a win of the conference finals even though I was demonstrably bad at the job but most of the fans and media didn’t realize that yet, but they would have for sure eventually, so I quit before you can fire me halfway through next season after I call a timeout so I can literally strangle Alexander Ovechkin to death in front of 18,000 people, and maybe this way I have a chance of working again in the NHL someday.’ And I have to be honest, I feel like that’s close enough.”

3. Josh Hamilton’s Bat: R.I.P.
Jonah Keri nominated the actual person, Josh Hamilton, who hit nine homers in four games last week, but I’m going with the bat itself, because I was impressed at its somewhat dramatic death and subsequent trip to Cooperstown.

“She died a hero,” Hamilton reportedly said after the bat split Sunday. “She was ready to go. She was tired.” Aw, Josh. Lovely tribute.

“Blackburn manager Steve Kean has had bad luck in two places: bars and football stadiums. Problem is he keeps popping up in both. Last August, he had his license suspended for drunk driving, even though he had previously insisted that his drinks had been spiked. Then he led Blackburn through a pretty godawful season in which they were relegated from the Premier League and boycotted and often booed by their own fans. Since their relegation, things haven’t gotten any better for the little-known Scotsman. A video taken of him in a bar in Hong Kong during a preseason tour last summer shows Kean bragging about where Blackburn would finish in the table (top half) (wrong!) and calling former Blackburn manager Sam Allardyce a “fucking crook.” Now Allardyce, the guy who hired him at Blackburn as an assistant in the first place, is going to sue him. I don’t know, man. You have to salute someone who fails on so many different platforms. He is so modern. On the field! In the bar! In the courtroom! On the Internet! It’s Steve Kean!”

5. Philadelphia 76ers: Show Your Love
How can you not like the Sixers after watching this video (via Juliet Litman) of their Game 6 locker room celebration, which features a touching speech, a small child, and Andre Iguodala with his foot in a mop bucket?

7. Waka Flocka Flame, 2Chainz, French Montana, and J. Cole: Not Moving Sectional Sofas But Still Getting a Workout
Nominated by Rembert Browne and Ben Detrick, who sources (Rembert) say can’t be reached for comment, “because he had to move a sectional sofa.” Hope you don’t mind me putting that on the Internet, Detrick. Also hope the move went OK. Anyway. Take it away, Rem:

“For staying fit on Drake’s Club Paradise Tour and not pulling up their pants in this game of 21 on a basketball court formed by four tour buses. Special shout-out to 2Chainz and Waka looking identical in their identical dreads and identical outfits, especially when they hustle for loose balls at the same time.”

8. Stephon Marbury: Everybody’s Hero
China salutes you, Stephon Marbury. So does Dennis Rodman. And, apparently, so does Grantland’s David Jacoby, who writes:

“Stephon Marbury has a statue in his honor. Everyone in China and America is thrilled with this development. Well, everyone except Kareem Abdul-Jabbar.”

“[I nominate] Bryce Harper, who on Monday dropped a can of corn in the second inning, allowing an unearned run to score, then atoned by hitting his first Major League home run. Nats announcer Bob Carpenter led his call by yelling, ‘And that’s number one! And several more hundred to follow!’ before realizing he doomed Harper to several thousand knee surgeries and added, ‘We hope!'”