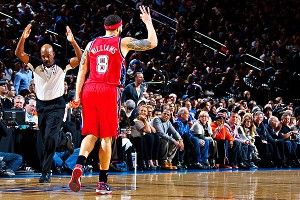 1. Deron Williams, A Chip on His Shoulder the Size of the Ritz
Nominated by David Jacoby for “trying to launch Williamsanity at MSG.” Williams scored 38 for the Nets in their victory over their cross-river rivals, the Knicks. He did so with a gleam in his eye that looked like he was avenging a slight that took place LIFETIMES AGO.

2. LeBron James, Force of Nature
I think it’s a very useful thought exercise to sometimes just sit down and think about how LeBron James plays basketball like some kind of unholy combination of Magic Johnson, Shawn Kemp, and Khal Drogo.Watch this collection of LeBron’s 10 best plays from just the first half of this season. Sometimes calling what he does “basketball” seems like it’s underselling what he does.


3. Russell Westbrook and Kevin Durant, Lethal Weapons
Brian Phillips sends this telegram from the plains: “I am trying to imagine the national hysteria if the Knicks and Thunder swapped rosters and the 51/40 game happened at Madison Square Garden. I am pretty confident that Jeremy Lin would be seen as a fun little prairie footnote and the city of New York would now be floating about two miles over the moon.”

Example 1: Feb. 14 — The Milwaukee Stiff
“For three seconds (:23-:26) Novakaine does his own version of the Harlem Shake, known to some as the ‘Milwaukee Stiff,’ after celebrating Jeremy Lin’s buzzer-beater 3 against the Raptors. The way he moves vertically is truly a sight.
Example 2: Feb. 19 — The Discount Novacheck
“After bailing out the Knicks, yet again, with an unbelievably clutch 3-pointer, Stevie runs down the sideline and unleashes the ‘Discount Novacheck’ (:13-:22), a much better version of Aaron Rodgers’ ‘Discount Double Check.’ Again, a marvelous thing to witness.

“Next week, I fully expect him to hit a fadeaway 3 to win the game, and then slowly step over Tyronn Lue.”

5. Drew Gordon, Mayor of Lobo-City
Shane Ryan, take it away: “Last week, the New Mexico big man had 27 points and 20 boards against no. 11 UNLV, and 17 points and 17 boards against no. 15 San Diego State — both wins. He helped locked up the Mountain West Conference for the Lobos, and also put himself in the conversation for first- or second-team All American. Also, he’s one of the best rebounders in the country, and I have this weird feeling he and New Mexico might be heading to the Final Four. I called it first. And if they lose in the second round, Chris Ryan will delete this blurb immediately and nobody will be the wiser.”

Don’t worry, buddy, I have affixed a Post-it to my computer. If they get knocked out in the second round, we’ll republish this immediately.

6. Davonte Neal, “Wu-Tang is for the children”
Bill “Lean on Me” Barnwell: “I want to nominate high school football player Davonte Neal, who failed to show up to his own college signing announcement. Even better, the signing was at his former elementary school and so they actually ran the announcement as an assembly, which meant that there were 600 kids sitting around waiting in vain for Neal to show up. I can guarantee that about 550 of those kids were thinking the same exact thing as they trudged back to class: Man, I hope we get another assembly when that guy actually decides to show up.”

7. Lopezanity, a Thing That Is Happening
Rafe Bartholomew wanted this to be no. 1, but I was worried Deron Williams would come shoot long-range 3s all over my soul if I did that.

8. John Fairfax, the Most Interesting Man in the World
Sarah Larimer is not easily impressed. But here, she is BOWLED OVER: “Because, according to the New York Times obit of this former adventurer/pirate apprentice/mink farm manager/ocean crosser, a then-9-year-old Fairfax ‘concluded a fight with another boy by filching the scoutmaster’s pistol and shooting up the campsite. No one was injured, but his scouting career was over.’ AMAZING.”

9. Miguel Cabrera, Asks “Yes” or “No” Questions
This comes via Buster Olney. Apparently, during an early spring training batting-practice session, the Tigers slugger was launching moon shots into right field. Whenever the ball would jump off his bat, Cabrera would shout, “SI OR NO,” asking his teammates to call whether the ball would clear the fence. Whenever he went yard, Cabrera would shout, “Si, motherfucker.” I’ll let Buster’s piece tell the rest: “When the group’s batting practice ended, [Prince] Fielder walked up to Cabrera and asked about the way he mashed to the opposite field: ‘How do you do that?'”

10. Martin Amis, the Last Starfighter
Andy Greenwald, who spends most of his time off playing Goldeneye blindfolded, nominates this giant of modern British literature and his recently unearthed 1982 treatise on playing Space Invaders: “It’s both an amazing and cautionary tale. I hope the Internet never discovers the sonnets I wrote about Crazy Taxi 3 a decade ago.”