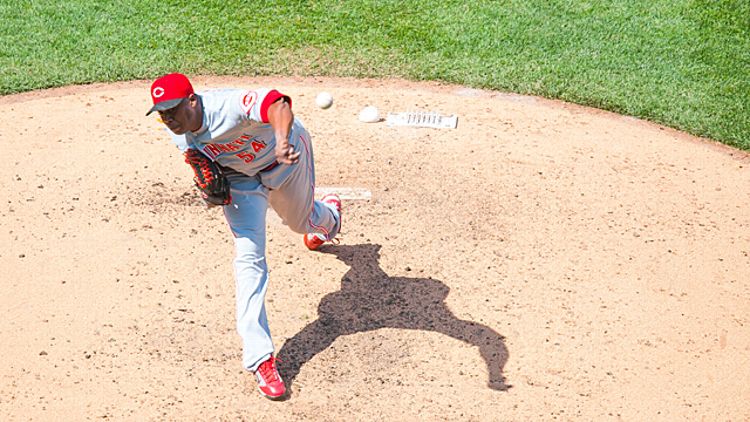 The Reds’ plan to shift Aroldis Chapman to the rotation died before he could make his first big league start, keeping one of the most dominant closers baseball has seen in decades in his ninth-inning role, but also wrenching some major upside away from Cincinnati’s starting five.

On paper, nearly everything about moving Chapman into a starting role made sense. Though he’d never made a major league start, Chapman came up in Cuba as a starting-pitching prospect. He made 13 starts in Triple-A Louisville in 2010, albeit with sometimes exciting but also inconsistent results. Though ostensibly a two-pitch pitcher as a reliever (and really closer to one pitch, having fired fastballs on 81.6 percent of his pitches last year), those pitches are electric, with his fastball averaging 98 mph last year and regularly breaking into triple digits. The bullpen would have been well-armed without him this year, with Jonathan Broxton and Sean Marshall signed for a combined $37.5 million over the next three years and Broxton’s refined, ground-ball inducing arsenal covering the closer’s spot. Anyone short of Mariano Rivera and Dennis Eckersley in their prime (and maybe present-day Craig Kimbrel, too) would’ve been a downgrade from Chapman and his unhittable offerings (44.2 percent strikeout rate last year … 44.2!!!). But the nature of the modern closer role means that even the best pitchers can affect the game only so much, with most of their work coming with their team up one to three runs, bases empty, needing only three outs to finish the job.

The rotation is a different matter. There was no plausible scenario in which Chapman was going to duplicate his 2012 performance and post a 1.51 ERA and 1.55 FIP and strike out nearly half the batters he faced while throwing 180 to 200 innings. But a realistic projection would’ve had Chapman smashing whatever fifth starter Mike Leake (career 4.23 ERA, 4.43 FIP, 1.26 homers per nine innings) would’ve delivered. Reds starters did fare pretty well last year, ranking fifth in the majors in ERA and 10th in FIP. But that performance came with the top five starters making 161 of Cincinnati’s 162 starts in 2012, a spotless health record that’s admirable but also open to bad luck and regression this year. It’s hard to imagine that Chapman as a starter wouldn’t improve the Reds rotation.

Real life got in the way. For one thing, Chapman kept saying this spring that he wanted to close. We can’t know for sure how a mercurial 25-year-old would’ve handled a job he didn’t really want, had the Reds refused to honor his request. But there’s probably something to be said for having players who are happy and comfortable in their jobs. We also can’t know exactly how Chapman would’ve handled the slower pace of starting compared to the fire-breathing mandate of a closer. We do know that the big lefty has had his share of off-field troubles. Even if we assume that temperament wouldn’t affect him on the field (and it certainly didn’t appear to while Chapman pitched out of the pen), there were questions about Chapman’s ability to pace himself, make adjustments as he went deeper into a game, and wield his changeup as an effective third pitch, given the very short list of starters in the past couple decades who’ve succeeded by throwing just two pitches.

The Reds are still the favorites to win the NL Central, with a healthy Joey Votto poised to show us more of his hitting genius, Jay Bruce potentially on the verge of a breakout, and a deep and diverse talent base capable of playing well even if and when injuries strike. Still, you wonder if the Reds might return to the playoffs, come up on a big game, and wish they had the Cuban Missile (and not, say, Bronson Arroyo) ready to fire on an overmatched opponent. At the very least, it would have been a hell of a lot of fun to watch.