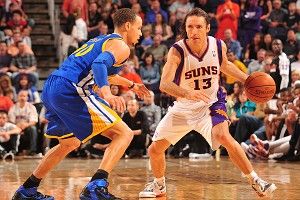 Stephen Curry and Steve Nash are physically large in the real world, but on the small side of the NBA spectrum. Although one is a wily veteran who sounds eerily like Will Arnett and the other is a fresh-faced newcomer who can easily recall his college days, the two men share one important thing in common that led them to the ever-enviable position of sitting across from me this past Wednesday: They both believe in Samsung’s new phone, the Galaxy S3.

In my ongoing quest to investigate what athletes are like during their offseasons, I stole Curry and Nash away from their cell-phone promoting duties and attempted to chat with them about the months that they spend off the basketball court. Attempted.

Has your offseason changed as your time in the league has progressed, or is it pretty much the same every year?

Click here for all of our interviews with fascinating people from the worlds of sports and pop culture.
It’s changed, but not on purpose. I think my injuries have played a big part in how I approach the summer, especially this summer, just because I missed the last two months of the year due to ankle troubles and surgery. So the majority of my offseason is dedicated to rehab and getting back to 100 percent health so I can be ready for training camp. I’m in Charlotte, where my summer home is, I’m starting a family soon, got a baby coming at the end of the month, so that’s what’s taking up most of my time, rehab and my family.

Are you worried about bringing a child into the limelight-filled world, or is that something that you’re OK with?

I think there’s a way to balance it. I had a blast growing up with my dad playing 16 years in the league. I think my first memories are being 7, 8, being at games, and seeing his teammates and that type of thing, so it was fun, and I’m excited to pass that on to my child. It should be pretty cool, especially because I’m still young.

How old are you again?

I imagine it’s the same with you, doing what you love for a job, it’s great. Yes, there are a lot of responsibilities that come with the territory, but I think I do a good job of balancing family, life, career where they don’t overlap too much. I’m just enjoying it.

So you went to college. For three years. You’re kind of a rare breed in the NBA. Do you think that has helped with your attempt to lead a balanced life?

I didn’t think of it when I was there, but when you look back, going to a school with 1,700 students had some impact. In my freshman year, no one really knew who I was so I didn’t come in with a big reputation or over-hype, so I just blended in with the rest of the crowd. Obviously when we went to the tournament things changed, but I’d already established who I was in the Davidson campus and community, so nothing really changed for me afterward, even with the stardom that came with making it through the tournament, and ultimately making it to the NBA. So yeah, it definitely did help with just learning how to be “one of the guys.”

I talk about my college days with my friends all the time. Do you have people in the NBA that you can talk about that type of stuff with, or are those people few and far between?

I have a teammate, Ekpe Udoh, who went to Michigan, then transferred to Baylor and went three years. Most of our talks are about how we went back to school, him after his rookie year and me after my second year. We both were taking classes after the season was over, and he graduated, I still have a little work to do, so yeah, just talking about stuff like that.

As was I. The only reason I know how to write and talk about my feelings.

So I didn’t realize that you lived in New York City, how long —

Can I interrupt you?

[Picks up my cell phone, looks at wallet-ish apparatus on the case, stares at it.]

That’s cool. I need one of those, I don’t have a wallet. You carry cards and stuff in there?

Yeah, man. It’s awesome. Phone’s cracked, but my case is awesome. It’s very helpful when I’m going somewhere, especially like a concert or something and don’t want multiple things.

So, back to living in New York. The first time I found out you might live here was when I went to the Rock the Bells concert.

Yeah. I was with my friends, and during the Nas set, I turn to someone and said, “I’m pretty sure that’s Steve Nash on stage.” And no one believed me, until about 10 minutes later when Nas turned around and says, “Shout out to my boy Steve Nash.” Please tell me how that happened.

To be honest, I went to the show without any type of expectations. I was with my girlfriend and a friend and we had some sort of access pass. All of a sudden, a friend of mine asked us if we wanted to come backstage where the artists were. So we went back and, it’s pretty funny, I run into Mateen Cleaves. I guess he’s really good friends with Nas, so he comes up and says “What’s up?” And I’m like “What’s up, haven’t seen you in a long time.” And then next thing I know, we’re meeting Nas. It was before his set, so we were just hanging out for like half an hour, and then right before he went on, Nas was like, “You’re coming on stage, right?”

You can’t really say no.

Yeah, I was thinking I am I really gonna regret this if I say no, so yeah, it was pretty cool. One of those experiences you never expect.

I partially brought that up because I’m interested in athletes and their offseasons. I read that you’re in an administrative role with the Canadian Olympics basketball team, correct?

How did that come to be?

It actually happened through one of my ex-teammates. We talked about it when we were players, like about changes we’d like to make to the program. He was managing a bank and he came to me and was like, “I think now is the time.” We’ve got a tremendous amount of talented high school and college basketball players, and I think it’ll give me an opportunity to be a good resource for the players and the program in general. That’s my main goal, to help the program grow and additionally help these kids get the opportunity to experience some of the things I’ve experienced.

Sort of changing the subject a bit, but I’ve long wondered if there’s this cross-profession network between Canadian celebrities in different fields that have made it in American markets. From like someone like you, to a Drake to a … isn’t Ryan Gosling from Canada?

Yeah, so do all of you know each other? Do you know the big names?

Not really, but some. I met Drake at the All-Star Game, really nice guy. I shook his hand, he gave me a big hug, but that’s it. Haven’t met Ryan Gosling. Not to get into a list, but on the other hand, I’ve gotten to know Wayne Gretzky.

Not the worst person to meet.

No, not at all. He was my hero growing up, it’s amazing. Gretzky in Canada is like … yeah. So meeting him, I was super star-struck at first, so it’s weird, even today, to try and forget that.

Do you find yourself reverting back to old Steve when you’re around him?

Yeah definitely, sometimes it’s embarrassing that I overlook that whole point in my life, because now we’re friends.

Do you find yourself getting deep into pop culture news during the offseason? Or are you into it all year round?

My girlfriend is a TMZ, MediaTakeOut person. I’m not, but I get a little bit because of her. I feel pretty up on pop culture, though. I mean, I don’t watch the Kardashians or anything like that, I’m not that heavy in the game —

But you know about your boy Tony Parker getting hit with a bottle at the club?

Yeah, I heard that. Really, Twitter is where I hear a lot of shit these days that I probably wouldn’t have heard or weren’t out seeking. But yeah.

So back to offseasons, keep forgetting about that, I guess one basketball question before I go. Have your offseasons changed as your career has progressed?

I wouldn’t say it’s changed, but it’s shifted slightly. Earlier in my career I used to take time off, but now I don’t take any time off. You know, as you get older, you’ve got to make sure you stay fresher. But yeah, not changed, but have definitely made some adjustments.