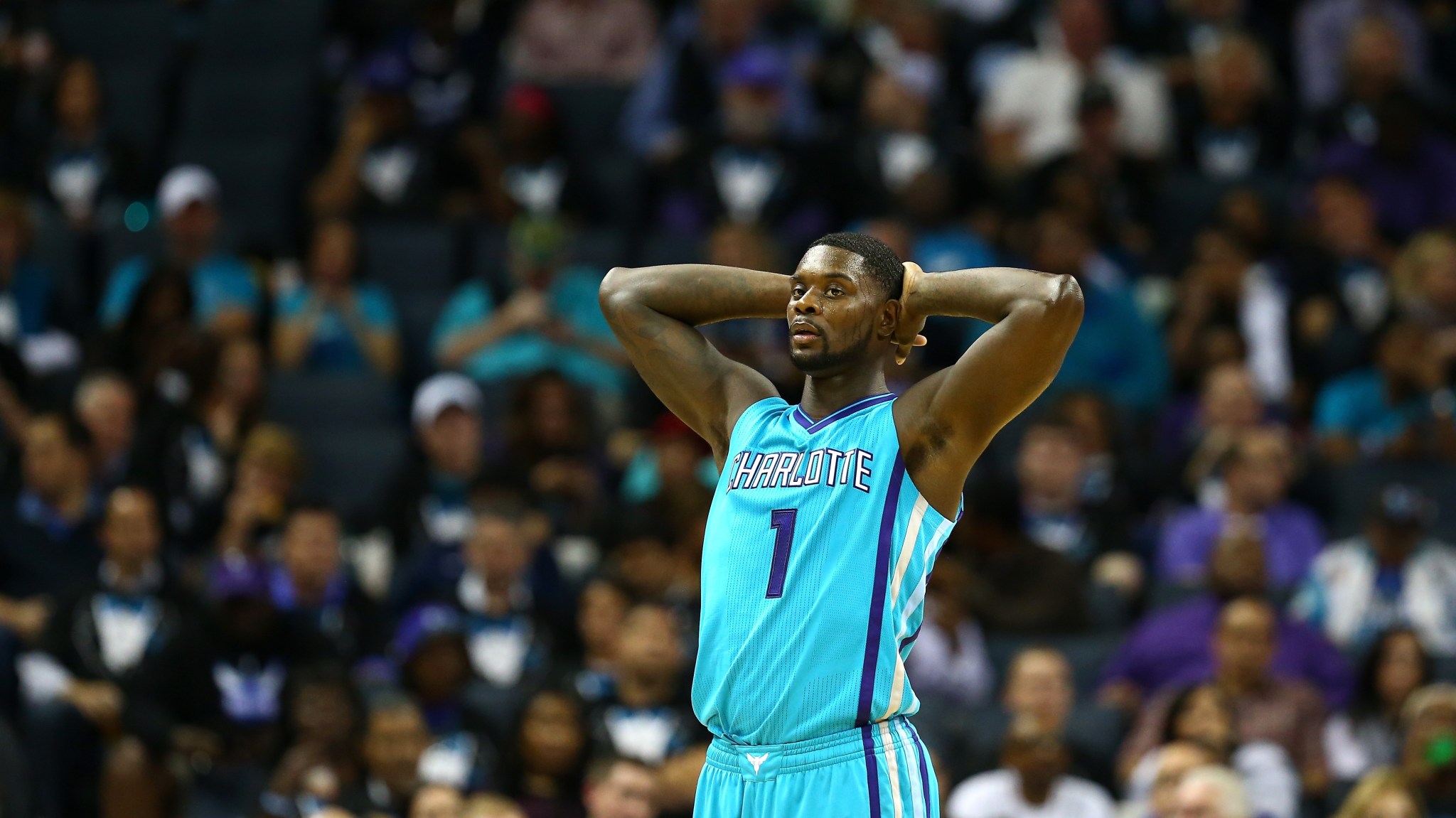 For a guy who just turned 24, Lance Stephenson has already lived an eventful basketball life. He became famous as a teen phenom in Brooklyn and rubbed his teammates the wrong way in Indiana as a prideful rookie who wanted to play. He was a bench guy when he flashed LeBron the choke sign the 2012 playoffs, but he was a borderline All-Star two years later — when he infamously blew in James’s ear during the conference finals.

His career as a Pacer ended after that series, when Stephenson hesitated on Indiana’s five-year, $44 million offer. Indiana responded by signing a bunch of other players, nudging their payroll against the luxury tax as Stephenson lingered in free agency. The Hornets, having missed on Gordon Hayward, gambled on Stephenson after a hush-hush meeting in Las Vegas during summer league that included an appearance from Michael Jordan.

Stephenson sat down with Grantland in Charlotte to discuss his old team, his new digs, and his NBA habits.

You like Charlotte so far? Found a place yet?

Yeah, I love Charlotte. I found a place like two blocks away.

We talking a penthouse? Good views?

So, did you talk to your Pacers teammates, or did they talk to you, during your free agency? Did anyone offer advice or urge you to stay or whatever?

I reached out to them to tell them the decision I had made.

After I made it.

So you didn’t reach out to them at all or vice versa during the process itself?

They’re in a bad way now, with all those injuries. You call up your old buddies there to wish them well?

Nah. I’m just focused on us getting better, making sure we’re good — and that me and my teammates are on the same page.

Before that meeting with the Hornets in Vegas, did you still think, even though the Pacers had signed C.J. Miles and some other guys, that there was some way you would end up back in Indiana? That somehow it would get done?

By then, I knew I wasn’t going to go back the Pacers. I had the mind-set that there was just no way for me to come back. I was just moving forward.

Did the Lakers get involved at all? I didn’t get why they didn’t go after you and a few other guys.

They called me a couple of times, but they never followed through.

Uh … It’s a process. When you change from a different team, and you’re just trying to get comfortable and learn the offense. You’re gonna have slumps. Some guys come in right away and fit right in, but right now, I’m taking my time and learning the offense. Hopefully my shot will start falling.

That groin injury in the preseason probably didn’t help.

Yeah. That throws everything off.

Have the coaches here talked to you about it?

I’m just getting comfortable. I’m gonna start shooting. I just gotta concentrate on my shot and follow through. I’ve just been missing, been struggling. It just takes time, and I’m gonna get it right.

It’s interesting: Coaches want everyone to make instant decisions when you get the ball. You like to hold it a bit sometimes, pull out some crossovers, and go to work. The offense kind of stops, but you can get to the rim that way. Is it tough to find the right balance?

You had a couple of monster putbacks the other night against Miami. Do you enjoy offensive rebounding maybe more than a typical guard?

You beat Dwyane Wade for both of them — he didn’t box you out. Was that a little extra satisfying, after all the battles you guys have had?

Wade’s a great player. It’s tough playing against him. I just stay focused and do whatever it takes to win.

The Hornets play your rap song during pregame. Did you ask them to do that?

It’s just a great thing they’re doing. I just hope they keep doing it. It gets me hyped before the game.

Any other songs in the works?

So you’ve written them?

They’re already done. I’m just waiting for the right time to pull it out.

You talk in the song a lot about “bottles,” and the video is basically guys partying. You’re young, with lots of money now. Is it hard to balance work and fun? Do you have rules during the season — like you can’t stay out past a certain hour the day before a game?

I have a lot of fun, but I don’t even drink.

No. I just said all that in the song to be cool, and to relate the environment I’m in a lot now. I don’t drink or smoke — none of that.

Not even in the offseason?

No. Not at all. I just like to party and have fun with my friends, and just be out a lot. That’s why I said that in my song.

You didn’t make the All-Star team last year, and it seemed to make you kind of angry. Is that still a goal, or after that experience, do you try not to think about it anymore?

It’s a goal, but you can’t worry about that during the season, because it tends to make you focus on that. You do too much and you start making a lot of mistakes. I just have to stay focused and all that will come.

Does Larry Bird still talk a lot of trash? In public, he says basically nothing.

Yeah. He talks a lot once you get to know him. He’s a cool guy. Of course he talks trash. If that’s you, that’ll always be you. He talks a lot, and he’s always challenging us to 3-point contests.

Can he still beat you all?

If he can stay in one spot, he can shoot it.

There have already been some complaints here about your body language — like when you don’t get the ball and someone else shoots, you kind of flap your arms, look up to the heavens, and your shoulders sink down. That can rub some guys the wrong way. Do you realize you’re doing it? Has anyone approached you about it here yet?

I’m just trying to win. I don’t feel myself doing that when it happens. It’s just my reaction. Nobody has complained about it yet.

You gotta admit you take rebounds from teammates sometimes — and that lets you start the break. But that was a source of frustration in Indiana — a guy would be all set to catch a rebound, and you’d fly in from nowhere and almost take it out of their hands. Does that annoy teammates?

That means I’m hustling more than them. If I’m taking your rebound, you gotta hustle more.

It does have the benefit of you running the break right away, without an outlet pass.

That’s what I like to do. I like to try to get quick points, and try to make something happen quick in the offense. That’s why I try to get all those rebounds and push it.

You are the most demonstrative pointer in the league on the break. When you have the ball, you scream and point at where everyone should go. It’s funny to watch.

I just try to get people in the right spots, and try to open up the floor so everyone can succeed.

I’m talking through the legs, no-look, even a couple of backward overhead passes. Do coaches ever say, “Hey, a normal pass will do fine”?

I mean, nah. Nobody has said that yet. I just try to trick the defense. When you act like you’re attacking and you pass it, that opens it up for your guy to get an easier shot.

It does get the home crowd going. Do you think that matters — that crowd noise can really change a game?

Does it count as a no-look pass if I look at my target, throw the ball to him, and only then look away as I’m throwing it? I think that’s a fake no-look pass.

If it fools the defense, it counts as a no-look.

How good can you guys be this season? You must notice Cleveland struggling early, right?

This team is really, really good. We got a lot of pieces. We just gotta focus and stay locked in on defense, and play off our defense. The thing that made this team great last year was that they played off their defense.

The scheme is very similar to what you played with the Pacers, right — dropping back on the pick-and-roll, etc.?

Right about the same.

Are you aware that your video-bomb with Derek Fisher became a big Internet thing? Did you know the camera was there? That was priceless.

Oh, yeah, I saw that. It was so funny. Stuff happens during the game. I actually fell down right there, and they happened to have the camera right on Derek Fisher, and I just popped up.

Did all your friends email and text that to you?

Oh, no. I see everything that’s on the Internet.