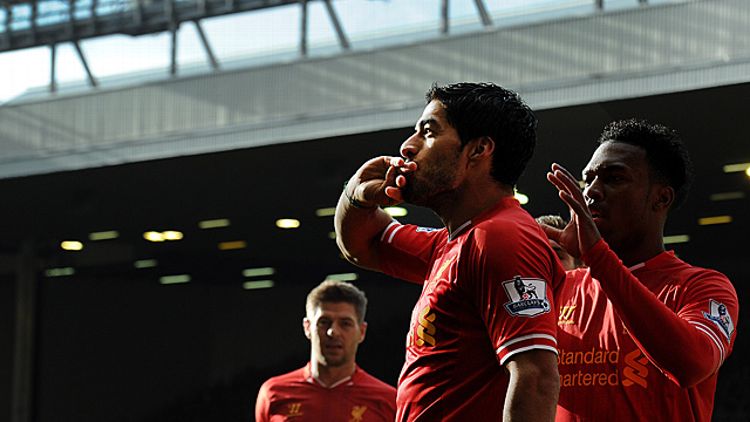 For a little while there, Liverpool fans were resigned to life without Suarez; some might have been looking forward to it. No more having to defend vague racism or a taste for human flesh! The team’s better with Daniel Sturridge and Philippe Coutinho! No one plays with two forwards anymore, anyway! This was correct, just in a backward kind of way. Suarez should not be on Liverpool, but not because Liverpool would be better off without him. No one’s better off without Suarez.

Because Suarez megs Premier League defenders from straight on. (No one does that after U-11.) Because Suarez heads balls in from 20 yards out …

And because he does both those things in the same game. He’s the most unpredictable yet consistently great player in the world. Four games into his season, he’s pretty clearly the best player in the Premier League, and Liverpool are two points out of first. Sure, it’s happening, but for how long?

A quick peak into the mind of a Liverpool fan: Are they really this good? Have they just had an easy run of games? And even if they are this good, what about Suarez? Won’t he leave, and what’ll happen if he does? Say they’re fine without him, won’t Steven Gerrard be retiring soon? And even if they’re OK without Gerrard, too, won’t Coutinho, Stevie’s presumed heir, get bought by Barcelona or PSG?

With the world’s best players increasingly being sucked up by a decreasing amount of teams, and with the January transfer window a few months away, Saturday might’ve been the last time Suarez played for Liverpool on the same day as El Clasico. It might’ve been the last time an El Clasico was played without Suarez. That La Liga clash certainly could’ve used him. It also might be the start of something big and memorable with Liverpool, but who really knows? Try to predict where he’s headed — and the ball’s going through your legs.

Chris Ryan: If you even make a highlight reel of the game Suarez had, you must have produced some kind of wonderful on your own. Above is Daniel Sturridge’s wonderful. One of the fun things about the league this season is the way talent is being deployed. Like Ryan said, a small group of teams is getting all the best players. So when a club like Liverpool or Arsenal is lucky enough to acquire someone like Mesut Ozil, Santi Cazorla, Philippe Coutinho, or Sturridge, the manager’s job becomes to make sure he has as many talented players on the field at once. It has been fun to watch Arsenal’s colony of attacking midfielders swap positions almost constantly, just as it has been fun to see how Brendan Rodgers uses two strikers, while not giving up the numerical advantage in midfield that his possession passing system needs to function. Tactics aside, it has been really entertaining to watch. Liverpool average 19 shots a game, and Suarez and Sturridge got off 13 between the two of them (six on target) on Saturday. You may not like Liverpool, Suarez, or (for whatever reason) Sturridge, but watching the Reds right now is one of the greatest shows on turf.

Mike L. Goodman: What do you call a team that has faced all three newly promoted sides and managed just one goal from the run of play over 270 minutes (and that one was a 92nd-minute last gasper)? Most of the time you’d call them disappointing. This year, though, you call them the Tottenham Hotspur, who have taken all nine points from those three clashes. Throw in another 1-0 win from the penalty spot against Swansea and you have a team that presents an interesting conundrum.

On the one hand, they’re off to an extremely promising start, sitting in fourth place on 19 points with only one truly subpar performance to stain their record (although what a horrific performance it was, losing 3-0 at home to West Ham). On the other hand, that record comes with a relatively slender plus-four goal differential, thanks to that West Ham loss, combined with those four 1-0 victories. In truth, while Spurs may have only one stinker on their record, they’ve also put together only one truly dominant display, a comfortable 2-0 win against Norwich.

Diving deeper into the numbers (from ESPN Stats & Info) doesn’t help either. Spurs are an absolutely dominant team when it comes to shooting the ball, leading the league with 159 shots, and are a defensive force at preventing shots (third-fewest at 87). That makes them the best TSR team in the Premier League. But they are converting those shots at an astoundingly low rate. Strip out penalties and own goals and they are finishing at only 3.77 percent. Arsenal is the league leader at 14.5 percent with Manchester City just behind at 14.29.

Generally speaking, conversion numbers are pretty heavily luck-based and revert back to average pretty quickly. But Spurs have consistently underperformed their TSR the past few years, and while they are a great shooting team they also happen to be one of the worst shot selection sides in the league. They take their average shot from 22.6 yards away, the second-farthest distance in the league. The closest shooters are Manchester City at 17.6 yards, followed by the heavily header-based West Ham at 18.0 and then the league leader, Arsenal, at 18.8 yards.

Right now, Spurs sit fascinatingly on the fault line between shot volume and shot quality. Whether they can balance there for an extended period of time remains to be seen.

Steven Fletcher with the me-me-me arm pump, the Klinsmann slide, and the Tevez leap into the crowd. An 8.0 out 10, with an extra .5 for taking his own life into his hands by jumping into that den of hysteria. The Borini celebration was pretty epic too. It caused a mini pitch invasion!

Goodman: It seems like every year, early in the season, there’s one party crasher. This year it’s Southampton. After a routine 2-0 victory over a dire Fulham, Southampton sit in fifth place on 18 points with a goal differential of plus-seven, tied with Everton and just behind Tottenham for the last Champions League spots. They currently sit above both of the struggling Manchester teams, and visions of a Cinderella Champions League run are beginning to form at St. Mary’s Stadium. It’s a nice place to be, and Saints fans should enjoy their moment right now because, sadly, it’s unlikely to last.

Last season, West Bromwich Albion was the little engine that could. They hit their high-water mark after 13 games, when they found themselves in third place on 26 points, with the same two-points-per-game average the Saints have now. That’s when they paused, looked around at their lofty heights, had their Wile E. Coyote moment, and began to plunge toward reality. Over the last 25 games of the season, WBA managed only 23 points and had a goal differential of minus-12. That’s not to write off the importance of their start — it gave the team the necessary cushion to avoid getting dragged into a relegation battle, despite playing basically relegation-level football for the last two-thirds of the season.

The year before, it was Newcastle playing Southampton’s role. After nine games, Newcastle was on 19 points, tied for third with a plus-six goal differential. A month later, having played 13 games, they managed to get to 26 points just like WBA, with a similar goal difference of plus-seven, although they dropped to fourth place in the table. Unlike WBA, they didn’t completely fall apart after that. Newcastle managed 39 points over the rest of the season, good enough for a respectable 1.56 points per game. Newcastle was hot early and lucky late and they rode it to a fifth-place finish and a Europa League qualification spot.

That’s where Southampton is. They’ve had an undeniably strong start that gives them plenty of room to absorb the stretches of poor play they’ll almost certainly run into over the course of the season. That’s nothing to sneeze at for a team only two years into their current stint in the Premier League. It’s also a far cry from being a realistic contender for a Champions League spot.

Goodman: Take a Premier League break for a second. You might remember Michael Bradley. He was last seen hobbling off a field in Costa Rica with a severely sprained ankle. Well he’s back. Down a man with Roma’s perfect record on the line late against Udinese, he did this.

More importantly though, on Italian radio it sounded like this …