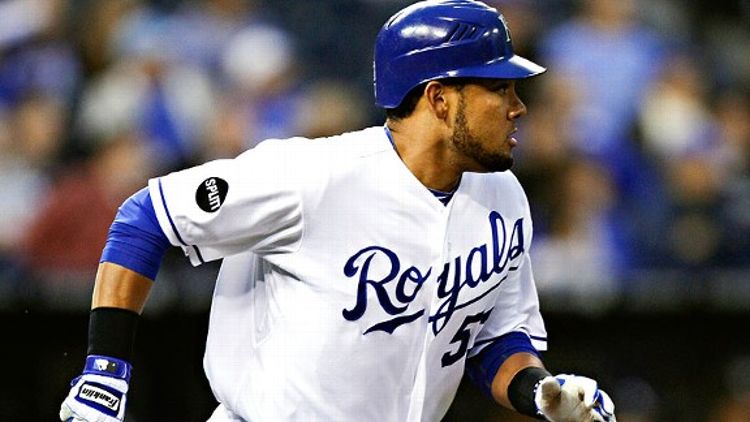 Any move involving a player leaving the Kansas City Royals might not seem like big news, not with World Series afterglow still with us and the likes of Albert Pujols hitting the free agent market. But the 2010 World Champions acquiring a player who nobody seems to like is the launch of another glorious Hot Stove season.

The Giants snagged Melky Cabrera in the deal, sending Jonathan Sanchez and lefty Double-A pitching prospect Ryan Verdugo to the Royals. We’ll get to the Royals’ haul in a second. First, let’s consider Cabrera, the miscast center fielder who teamed with Jeff Francoeur to form the most polarizing outfield duo in baseball this year.

In honor of Melky’s near-dairy first name and his muddled credentials, we’re granting him a new nickname: Frogurt.

He also got into much better shape after playing the 2010 season brutally overweight, which may have been as big a factor in his career year as simple batted ball luck? That’s good.

Any season with a sub-.300 average punches a big hole in his production, since he’s a hacker with a 7.4% career walk rate who somehow set a career low (walking just 5% of the time) last season? That’s bad.

Mixed signals abound. Cabrera should be in the prime of his career at age 27; will command a very affordable arbitration award (despite his big year) after making just $1.25 million in 2011; has the kind of offensive skill set that plays perfectly in a deep-gapped park that absolutely murders home run-hitting but plays as neutral or better for doubles and triples; has just one year left before free agency, so he won’t block top prospect Gary Brown and won’t cost the multi-year deal it probably would have taken to sign Coco Crisp or a similar alternative; and even in a scenario in which he regresses upgrades an offense that ranked 29th this year.

But he’s also a well below-average defensive center fielder whose bat would be light for a corner spot if 2011 proves to be a fluke. The Giants may have bought at Cabrera’s absolute peak, and the player Cabrera figures to replace, Andres Torres, is a flawed and fragile player who could very well be a better option than Cabrera a — or at least one who wouldn’t cost anything in trade, since he’s already a Giant.

Here’s the thing, though: Sanchez is nearly as perplexing a player as Cabrera is.

Though his fastball tops out in the low-90s, Sanchez is a huge strikeout pitcher, parlaying his fastball-slider-changeup repertoire into 9.4 Ks per 9 innings for his 2006-2011 career; only teammate Tim Lincecum owns a higher strikeout rate among qualified starters during that same period. He’s also just a year removed from striking out 200-plus batters in a season and throwing five shutout innings on the last day of the season, thus playing an integral role in pushing the Giants into the playoffs that yielded their first World Series in 56 years. He’s got no-hit stuff, literally and figuratively, if only he can harness it. There are reasons why the Royals wanted Sanchez, and not just because Bruce Chen was their most reliable starter.

Still, they’re buying low here. Sanchez made just 19 starts in 2011, posting a mediocre 4.30 FIP and walking nearly six batters per nine innings, a career high for a pitcher who was already one of baseball’s wildest. Even if he does shake off the biceps tendinitis that wrecked his command and shortened his season, Sanchez projects as a mid-rotation starter at best. In the past three seasons, he’s made Quality Starts just 37% of the time, meaning he manages to meet the modest standard of six or more innings pitched allowing three runs or less about once out of every three starts. He made $4.8 million in 2011, meaning he could pull in $6 million or more in arbitration even after a subpar season, a price the Giants may have not wanted to pay, especially if concerns linger over his health. Like Cabrera, Sanchez is a year away from free agency, so the Royals aren’t necessarily getting a keeper. With his 29th birthday a week away, it’s not like Sanchez is oozing with upside either. Also, you know who else was a wild lefty starter who’d struck out more than a batter an inning for his career heading into his late-20s? Oliver Perez. So … yeah.

Ultimately the trade boils down to upgrades for both teams, albeit flawed ones.

Sanchez doesn’t solve the Royals’ ugly starting pitching issues, but he’s a step in the right direction, one acquired without sacrificing any of their many very good prospects (they actually added a prospect in Verdugo, who actually owns some Sanchez traits of his own, even if he’s a long-shot to be an effective big-league starter). The fact that the Royals had Lorenzo Cain waiting in the wings to play superior defense in center and maybe hit a little too helped make Cabrera expendable. I won’t steal Rany Jazayerli’s thunder here, but the Royals are becoming more interesting, and in a lousy division, they could start to smell a little sleeperish, especially if they can land a front-line starter to pair with Sanchez.

Meanwhile, the Giants save a million or two, upgrade their miserable offense, and provide some outfield insurance if they can’t re-sign Carlos Beltran or land any other outfielders. Cabrera’s 2011 season was better than anything Sanchez has ever done, and another 4-win campaign at a price of $4-$5 million would be a great bargain. Full seasons from a healthy Buster Posey and a not-screwed-over Brandon Belt and the Giants could be interesting again, especially in a weak division of their own. If they can supplement this move by going after, say, Jose Reyes rather than settling for the punchless Brandon Crawford at shortstop, the Giants could be a surprise team again in 2012.

After the Cardinals’ miracle run, anything seems possible. Hey, maybe put $5 on a Giants-Royals World Series at 500-1 odds. You never know.