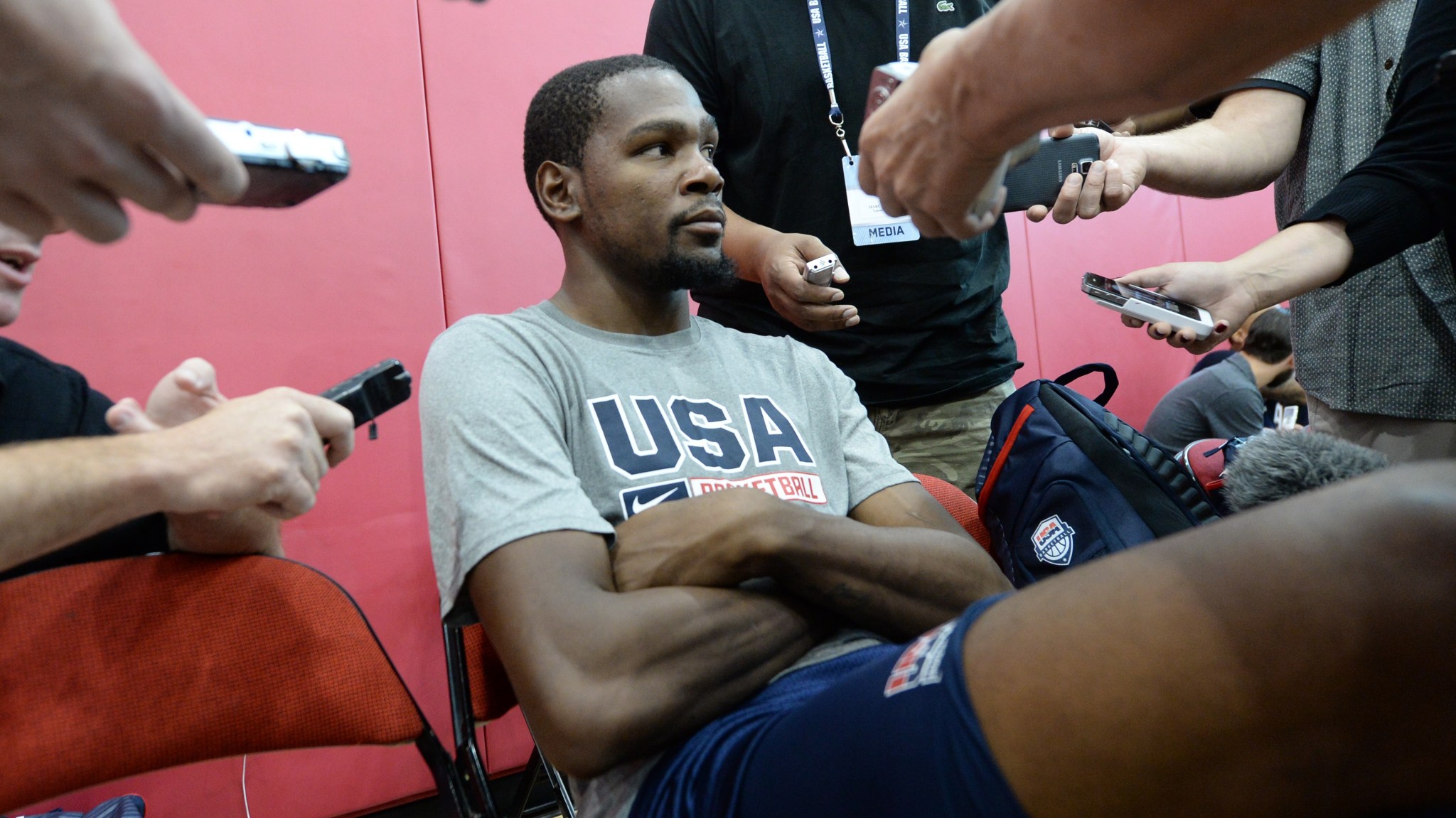 Listen. We have to talk about something.

Kevin Durant going to the Wizards.

I’ve done my best not to mention anything about this, because even as someone who’s routinely allowed to lose my mind over the Wizards and publish those thoughts on Grantland, there has to be a line somewhere. It’s just not appropriate for me to jump out here and start posting photos of the elaborate dream scenario for a 2017 title I have scrawled on my bedroom walls.

Plus, you know, none of this can happen for the next 23 months. It’s fucking crazy to even talk about this right now.

But there have been several articles in the past 24 hours that have added fuel to the fire, and even Durant has addressed it. So now I’ll address it. Here are the reasons why nobody should be talking about Kevin Durant going to the Wizards in 2016.

1. He’s got two more years in Oklahoma City. He may be thinking of leaving right now — this summer, right this second — but none of that matters. It’s not like he can force a trade just because he’s feeling conflicted about spending the rest of his career watching the Thunder avoid paying the luxury tax. He’s playing for the Thunder the next two years. If Durant is frustrated this summer, that’s really not a big deal for the Thunder. There’s plenty of time for him to change his mind. Two years is a long time. Way too long for us to drive ourselves crazy trying to read his thoughts. That’s the biggest reason we should stop talking about this.

2. Oklahoma City is really, really good. Soon Durant is going to leave Vegas, he’ll go back to Oklahoma City, where’s treated like a god, and then the season will start. He’ll win 60 games again, probably finish first or second in MVP voting, and go to at least the conference finals.

Kevin Durant is not Kevin Love. Winning cures almost anything in sports, and OKC is going to win a lot over the next two years. This is the biggest reason Wizards fans shouldn’t be that excited. If Oklahoma City wins a title or maybe even just makes the Finals in 2016, there’s simply no way Durant leaves. And given all the talent in Oklahoma City, it’s hard to imagine it comes up short for each of the next two years.

3. The Wizards might not be that good. It’s time for a reality check. The Wizards signed Paul Pierce; Otto Porter and Glen Rice Jr. were called the Jordan and Pippen of summer league; and John Wall and Bradley Beal should be better. Plus there’s DeJuan Blair and Kris Humphries, two very solid pickups to fill in for the inevitable 30-game Nene injury. It was a really good offseason. This doesn’t mean the Wizards will really be good.

They still brought back Randy Wittman, and in case you forgot, this team was barely better than the Bobcats with Wittman coaching. Wall still has to get better, Beal has to get more consistent, Otto has to prove he can play on a real NBA court. Nene will be gone in two years, and given the age of Marcin Gortat and his five-year, $60 million deal, there’s a decent chance he’ll be worse by the time 2016 comes around and it’s time to recruit Durant. I’m excited for this season, and the summer was great. But it’s not like the Wizards are title contenders just waiting for Durant to come over and turn them into a dynasty.

4. The Lakers, Knicks, Heat, and GodKnowsWhoElse Will Also Have Cap Space. If Durant really does test the market, there will be plenty of competition. This will matter.

5. Oklahoma City is really, really good. Seriously. I mean, I understand why people are talking about this like it could really happen. For three weeks in June, everyone in the media dismissed the possibility of LeBron James ever going back to Cleveland. It would be too crazy, said everyone.

Now, nobody’s willing to discount the possibility with Durant. Everyone learned their lesson.

But the key point is that LeBron left for a better long-term basketball situation. No matter what that Sports Illustrated letter said, this wasn’t just some sentimental thing that felt right in his heart. Maybe it was sentimental too. But it happened now — smack in the middle of his prime — only because the Cavs somehow stumbled into the luckiest 12 months in history, and the near future in Cleveland became much brighter than it would’ve been in Miami.

No matter what happens in the next two years, this won’t be true with the Wizards or almost any other team going after KD. Russell Westbrook’s a top-10 player, Serge Ibaka’s defense and spot-up shooting might make him the best possible big man to pair with Durant and Westbrook, and even if you think the Thunder have gone cheap on the supporting cast, the core they have (plus Reggie Jackson and Steven Adams) still adds up to the most pure talent in the league.

They may not win the next two titles, but they’ll be in the conversation every year, and everyone’s still young and just inching into their prime. No matter what happens the next two years, in 2016 it’ll be much tougher for Durant to leave the Thunder roster than it was for LeBron to leave Miami’s roster.

6. JUST NOBODY SAY A GODDAMN WORD. This was fun when it was a joke around the office, but now it’s getting real. Nobody move. Nobody say a word. Everybody just try to act natural.

“Everybody’s asked me about it,” Durant told reporters yesterday. “Every time I go on Instagram or Twitter. All my friends ask me about it. So I’m not going to sit here and act like I’m naive to the fact that people think about that stuff. But I just tell everybody that I’m here in Oklahoma City, [and] I love it here. Who knows what will happen? I never close the door on anything. But I like where I’m at right now, so I can’t answer that question.”

Listen to how depressed he sounds about signing that extension a few years ago: “To be honest, I just didn’t know. I was 21. I didn’t know. Obviously, when you sign a deal, you want to have the best options for yourself, the best flexibility for yourself. But I loved Oklahoma City so much I just wanted to dedicate and show them that I’m all about the team.”

Listen to him talk about the Wizards: “Beal is a tremendous player, I love watching him. One of those players that’s going to be a thrill to watch for the next 10-15 years and he’s a player for my hometown team so I love him. I also like Wall; he’s one of my great friends and I’m glad he’s [in Vegas].”

Look at this: “I’m going to do what’s best for me. It’s hard to talk about that right now when I’ve got two years left in Oklahoma City. I’m just going to focus on that. I’m not going to make a decision based on what anybody else does. I grew up watching the Bullets/Wizards. I grew up taking the train to that arena, all the time, to watch Georgetown, the Bullets, the Washington Mystics. That whole city is a part of me. It’s in my blood. I love going back home, seeing my family and playing there, but I love Oklahoma City too.”

Listen to Wall: “He’s like an older brother to me. He’s happy to see the things I’m doing and what I’m doing for the city of D.C., especially since that’s where he’s from. That’s a big honor to me and an honor to him, so we enjoy it. We enjoy our conversations. We enjoy hanging out. We have our fun times.”

THEY ENJOY THEIR CONVERSATIONS.

THEY HAVE THEIR FUN TIMES. 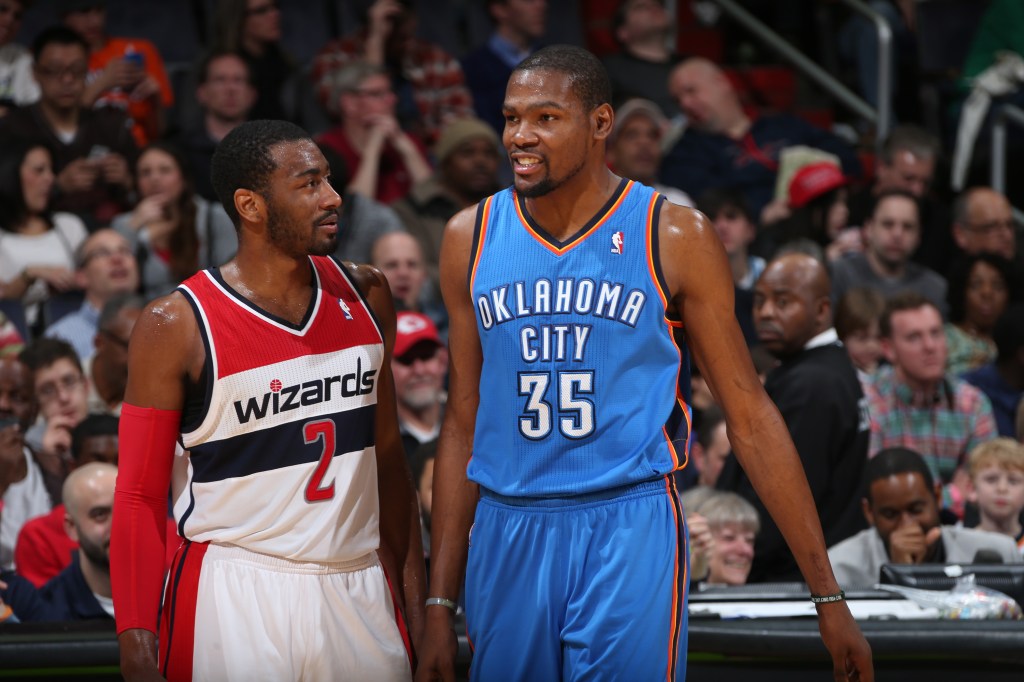 You want to know why this can happen? Because Durant’s pissed that the Thunder traded two of his best friends in the NBA (Jeff Green and James Harden) and never really spent the money to replace them in the rotation. Because OKC could’ve taken Cleanthony Early or Nick Johnson in June, and instead they got involved in an elaborate scheme to game the luxury tax with a crappy small forward who probably won’t help them very much in a few years and definitely won’t help them next year. Because Durant is actually good friends with John Wall and he’s never been as close with Russell Westbrook as it seems. Because the lack of chemistry between KD and Westbrook is real on the court, and Westbrook’s success comes at the expense of KD sometimes, and people continue to deny this, because it’s one of those weird basketball Internet things where you’re not even allowed to wonder about it without getting attacked, but it’s been real, especially since they lost Harden. If they lose the next two years the same way they did this year, if they can’t afford to keep someone like Reggie Jackson in free agency, if OKC’s owners continue to profit every year without spending money on the team … there’s plenty that could go wrong to push Durant out of Oklahoma. (Also, it’s fucking Oklahoma. Would YOU stay forever?)

There’s no situation that’ll make more sense than D.C. in two years. Forget the Lakers and Knicks. You think he’s gonna go play next to Melo? The Wizards may not be real title contenders now, but that’s only because Wall’s true destiny is as a no. 2 superstar who sets up someone else, the same way Beal’s destiny is to be Ray Allen in his prime, the perfect third superstar who just murders people in the playoffs. The Wizards are in an easier conference, Beal and Wall will be perennial All-Stars by 2016, they just hired his high school coach, and D.C. is home. I’ve watched Durant play streetball in the summers here since 2009. He buys 100 tickets for friends and family every time OKC plays here. He went to Mystics games growing up, he reps the Redskins constantly. He thinks go-go music is good. D.C. is in his blood.

Durant loves his city as much as anyone in the NBA, and he loves it so much that he’s apparently incapable of not talking about how much he loves D.C. even as he tries to quiet the rumors about 2016. He’s not closing the door on anything. A lot needs to go wrong for the Thunder and right for the Wizards, but none of this is as crazy as people are making it seem. It’s easy to dismiss the rumor and act above all the speculation; it’s harder to say this is entirely plausible and we’ll just have to wait and see.

“The whole city is part of me.”

“All my friends ask me about it.”

“I grew up taking the train to that arena.”

“It’s funny seeing guys think about more than just basketball for once. He thought about the city where he comes from … how he can affect so many of the kids just being there playing basketball. I love that. You gotta respect that.”

“Who knows what will happen?”

“I never close the door on anything.”

It’s stupid that we’re even having this conversation.

But just to be safe, nobody say another goddamn word about this until 2016.