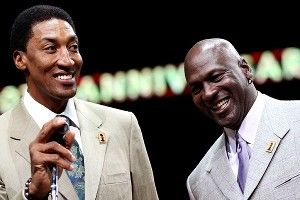 3. “Chicago hot spot Sunda” sounds like one of the places Stefon would recommend to Seth Meyers as a place to take the whole family.

4. The importance drop-off from “World Wide Wes” to Antonie Walker can only be topped by:

5. The importance drop-off from Antoine Walker to Nazr Mohammed.

6. “Dance-off” + “Jordan and Pippen” + “Trey Songz and Fabolous” = The entire reason that smartphones come standard with cameras/the Internet was created.

7. There’s not a video of this taking place, which makes me question everything I believe in, including gravity and fiscal responsibility.

Should we be subjected to live in a world where this happened and we can’t watch it? NO.

Should private, personal moments among friends behind closed-door settings even exist? NO.

It’s not out today, but know that it will turn up, that is, unless MJ is holding all smartphone users present at Sunda (Nazr included) hostage in his tan-suit-filled lair beneath Lake Michigan. Then we’ll never see it. But if he’s not, then we’ll just have to wait and watch this on loop, yearning for the day when our dreams can finally come true.

Why lie, this is the greatest “settle” in the history of mankind. Well, that coupled with this (provided with commentary):

David Cho: This is one of my favorite NBA-related videos of all time. It goes without saying that the dancing is top-notch, and all three of them have a really good sense of body control and their movements. It’s really impressive. What, you don’t think so? Well, maybe you should try to replicate what they’re doing in the privacy of your own home and see if you can do it. You can’t, can you? You failure.

Some of the other more notable bullet points from this video are:

Rembert: And this (provided with even more commentary):

Juliet Litman: Before everyone did the Dougie, all anyone did was the Soulja Boy (including me and my college roommate after we studied the instructional video for many hours). Say what you will about Baron Davis, but he was a fierce and able leader in the Soulja Boy movement. He showed commitment to the choreography during times at which he perhaps should have directed his energy elsewhere, and when the time came, he got his whole team and their fans involved. In fact, the 2007-08 Golden State Warriors may have been one of the most dance-friendly teams in the history of the NBA. Honorable mention to Al Harrington, who really nailed the Superman motion.

Rembert: All commentaries aside, please find the Jordan-Pippen dance-off, Mr. Internet. The mental image I have of them doing the worm in opposite directions until both of their backs simultaneously give out, thus ending the party, will haunt me until I know whether it actually happened.